Julian Perez vs. the Fifties

If the fifties were a planet, it would be a papier-mache crust over a core of vacuum.
Venus 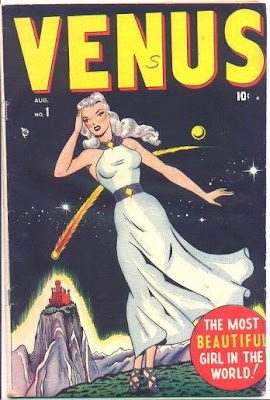 Now, I'm unlikely to ever win an award for totally understanding women any time soon, but it occurs to me that fiction aimed at women usually has the heroine as a scrappy underdog, like Julia Roberts in Pretty Woman, or a spunky ordinary girl, like Anne of Green Gables or Pippi Longstocking. The idea of setting a series around the premise that the heroine is the loveliest creature in existence sounds unbelievably alienating.
I have no idea what the target audience is for this. The women thing was a guess because of the comic's mostly relationship humor and the fact it's set inside of a fashion magazine, but like I said, this doesn't sound like a concept that would be appealing to women. It's not for guys either, the way that say, the jungle girls or Bill Ward's Torchy Todd are, because Venus is hardly a jack-off fantasy for American GIs drawn in loving and horny detail. And I fail to see how kids would find the love, jealousy and working-girl comedy at all appealing.
I mean, I always hated stories where characters have only sympathetic flaws, like a sweet or nice girl that has a stutter or is in a wheelchair, where the flaw is used in a very cheap way to get us on the side of a character....but this is worse, because the problem she faces aren't problems in the conventional sense.
Worst of all, the "villain" of the story has a point. Venus has no qualifications and she comes in off the street and is promoted to the editor position of a beauty magazine. I'd hate her too, especially if I worked my duff off to get where I was.
One of the weirdest parts about Venus is that, as a book written by Stan Lee, towards the end the book undergoes a metamorphosis from office humor and becomes a dress rehearsal for Silver Age Thor. Like Silver Age Thor, the stories were centered around an immortal that had a forbidden love for a mortal earthling of modern times, a figure that nobody really believed was actually a god. And in both series, there was a haughty Big Kahuna god that didn't like the main character messing around and insisted they return. And finally, both have a main villain named Loki - and in both versions, he's a demonic god of evil that has horns (though in the case of Venus, he's drawn identical to the Devil).
Captain Science 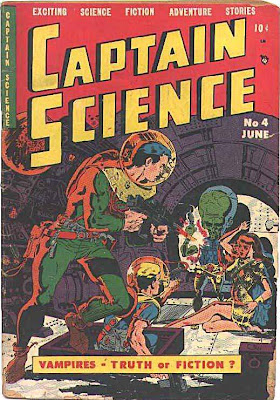 I read this one as soon as I could because I am a huge fan of Wally Wood. Unlike "THUNDER Agents," here though it seems like Wood is just phoning it in for a paycheck.
One of the frustrating things about being a comics fan sometimes is that as everybody's such an insanely nitpicky nerd, and somebody somewhere is a hardcore fan of say, Donald Glut's "Dagar the Invincible" and "Tragg and the Sky Gods," it's very rare and ridiculously difficult to have a new revelation or a new insight, especially into really storied characters where everything that can be discovered about them has been discovered.
Here's something that I don't think any aficionados of classic comics have ever pointed out before: the similarities between the origin of the Silver Age Green Lantern (who debuted in 1959) and Wally Wood's Captain Science (who debuted in 1951).
Both heroes have their origin start off with a bald alien with an unusual skin color that crash-lands in the New Mexico desert. Before they die, the aliens give the hero an item of power. In the case of Captain Science, the alien's teaching machines give him all sorts of knowledge of scientific fact unknown to earth.
The Yellow Claw 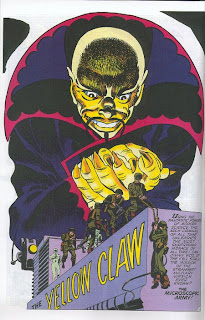 Sorry to say the obvious here...but Good God, that was racist!
The revival of the Yellow Claw in modern Marvel Comics, including a really memorable story by Englehart (take a shot!) and a few other great ones including a tale where he actually killed the Mandarin (and he was really dead, too, though he came back to life when he placed his mind in his rings and some poor sap tried them on) made me very curious about the character and his 1950s origins.
The first issue with the Yellow Claw were well-plotted, atmospheric thrillers with extraordinary art. It definitely had strengths as a concept, though it was extremely derivative. Every panel looked like an extremely elaborate Chinese restaurant placemat. The next three stories were more or less Challengers of the Unknown stories: centered around a single weird occurrence, like a whole building where gravity reversed itself.
Posted by Julian Perez at 8:21 PM

You need to check out the "Comics Make No Sense" blog for a look at the male version of Venus, "Mr Muscles"

I especially love the panel where an enemy snarls, "I hate you because of your splendid physique!"

Yellow Claw was recently used in Agents of Atlas, the comic that revived the idea of a 1950s Avengers.

The series also retconned that the Venus who took part in that group was a naiad using the real one's name.

Interestingly enough, Volume 12 of the recent Official handbook of the Marvel Universe hardcovers has entries for both Venus' and still has the goddess being the one who was in those 50s comics.

I haven't read Agents of Atlas, but it's interesting how that issue of What If...? to this day seems to excite people. Mostly because the events of the comic itself leave it ambiguous as to whether it actually happened or not. I personally always read it as an attempt by Don F. Glut (What If...? was a rare example of his non-Gold Key, non-horror scripting) to do a "backdoor pilot" for the 1950s Avengers. There were even a few things there that just weren't resolved in that particular issue, like the idea that Venus and Marvel Boy had kind of a thing. (I guess Venus is a natural-born cougar.)

I personally love the presence of the Human Robot. It was genius to make a robot with a taste for killing people one of the group. Unlike 3-D Man, he was an obvious choice.

Unfortunately the issue itself indulged in pointless Roy Thomas nostalgia (Thomas received Story By credit); I got a bellyful of that with his All-Star Squadron.

The idea that Venus wasn't actually Venus is directly contradicted by her own comics, which like I said, towards the end became a dress-rehearsal for Mighty Thor...but then again, her comics directly contradict almost the entire Silver Age, so it would be weird.

I guess thats why they made only the "G-men" version of Venus an imposter.

On another note, I should go on Wikipedia and see if Alex Ross is using Captain Science in his Project Superwpoers series