I kind of liked General Grievous 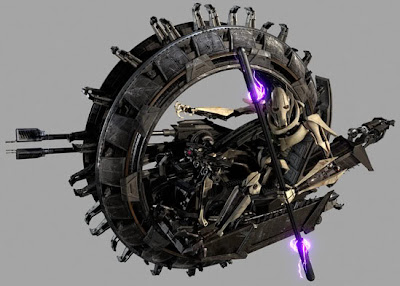 Yes, I know what you're thinking. What's the bland robot villian from Episode III doing on here, anyway? All most people can think of is that extremely undignified moment where General Grievous emerged in that Looney Tunes giant wheel vehicle.
Remember that scene in Batman Forever where Two-Face slaps the Club on the wheel of his helicopter? The giant Wile-E-Coyote wheel vehicle was sort of like that: a WTF moment where it was obvious the people that created this didn't actually believe in their own world, where the sense of whimsy officially went too far and became jarringly out of place.
To understand why I like General Grievous, you have to understand a few things about Star Wars, and what makes it different from Star Trek. (I provide this for the benefit of "Trek" fans, just to show the difference.)

Just before the prequels were made, there was a long drought where no Star Wars films were made at all, a situation that Star Trek never really encountered. Someone had the bright idea to call science fiction superstar Timothy Zahn and have him write sequels to the original movies.
Needless to say, the Timothy Zahn "Heir to the Empire" books were nothing short of the smash hits of 1991, among the top selling books of the year, on the best seller list for 29 weeks. They were direct continuations of the movies, and were fully sponsored by Lucasfilm. Every character was spot-on; it was possible to hear Harrison Ford's voice when Timothy Zahn wrote Han Solo's dialogue. There was an air of incredible authenticity to it all that dispelled the idea that all of this was just glorified fanfiction, and gave the books an incredible legitimacy. Many fans think of his trilogy as Episodes VII, VIII, and IX. That's the crucial difference: they were not just tie-in books, but allowed to be a continuation of a pop culture phenomenon.
What's more, character development logically continued into the books. Han Solo for instance, started to become responsible because he was married and had a wife, and Leia started to deal with the horror of the fact her father was Darth Vader, particularly when she has to assume the identity of "Lady Vader" to an alien race that worships him. And instead of just retreads of the original movies, the Timothy Zahn books were full of totally new concepts. Grand Admiral Thrawn, for example, was a totally new kind of villain not seen in Star Wars before: a calm, rational genius rather like Sherlock Holmes, in that he could identify what was going on with even the barest clues to the point he seemed near-omniscient.
If the Timothy Zahn books had been anything less than totally spectacular - the publishing event of 1991 - from either a creative or sales point of view, Star Wars canon would be totally differentnow. It might be more like Star Trek, where novels are seen as cynically produced, non-canon fluff to series that are continuing simultaneously. But thanks to Zahn's success, the degree to which the books were embraced by the fans, the priority with which the books were held by Lucasfilm, and the drought of Star Wars films, the Star Wars expanded canon went in a totally different direction. 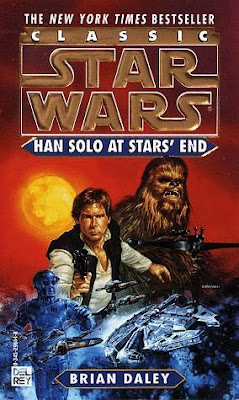 Because of this, everything "Star Wars" was canon, even things produced before 1991, when the notion of an expanded universe was really legitimized by Zahn's success - and even things like the Han Solo and Lando Calrissian novels, and the Marvel comic book, were retroactively made official and "grandfathered" in to the story of Star Wars (to this day, details established by those series are used and crucial, like the idea that Han Solo started off as an Imperial officer that was dishonorably discharged because he saved the life of a Wookiee slave). Because the Han Solo and Lando Calrissian novels were considered canon to a world that people are still interested in, they have consistently been in print for years and years.
(Another thing that happened, unrelated to the novels, was the success of Star Wars comics and computer games. Star Wars comics were so successful that Dark Horse switched to making licensed Star Wars comics exclusively, just like Marvel and DC only really print superheroes. Since an entire company's identity is wrapped up with the Star Wars comics with a level of involvement that Marvel and DC never were had with Star Trek comics, Dark Horse's Star Wars funnies are always considered "official" and "canon." Likewise, Knights of the Old Republic is widely considered to be one of the best computer games ever made.)
One might argue there was some precedent for all this. After all, Boba Fett really wowed everyone as being the only part of the Star Wars Christmas Special that anybody found interesting or memorable, which he did long before his appearance in Empire Strikes Back. The energy his quiet coolness created from his Christmas Special appearance created a type of accidental hype around him disproportionate to his actual role in the story. But prior to Zahn and "Heir to the Empire," the supporting elements to the films were just peripheral.
And it was into all this, a very different Star Wars experience, that the prequel films were made and released and that has to be taken into account when discussing them. All of this seems meandering and long-winded, but I wanted to explain the context under which I found General Grievous fascinating. 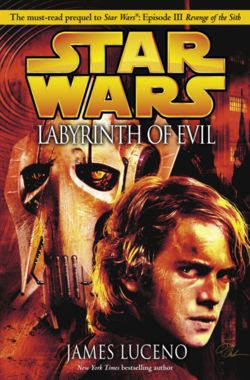 General Grievous was introduced to the world in "Labyrinth of Evil." And like Thrawn, he deserves credit for being a totally different type of villain that had never been seen before. A general that was horribly mangled to the point where only his living brain survived, he was rebuilt in a robot body.
When Christopher Lee's Count Dooku saw him for the first time, he sarcastically proclaimed him "General of the Droid Armies." Just then, Grievous went ballistic and killed several of his handlers.
He loudly roared that "I am not a droid!"
Suddenly, after that moment, I understood who this character was, that there was an idea behind him.
In Labyrinth of Evil, the viceroys of the Trade Federation, arrogant Chinese stereotypes that use robots for labor and are used to them in positions of servitude and telling them what to do, were excessively commanding and domineering of General Grievous. He didn't like that. Not. One. Bit.
The character of General Grievous, at least in that book, gave me faith that finally, Star Wars was giving us an interesting villain with a clear-cut motive. Alas, he was wasted in a cheeseball fight scene that showed nothing of his personality, character, or horror at becoming a robot.
This was the beginning of an extremely unhealthy relationship between Star Wars and its expanded universe. Because the prequel movies made no sense, every flaw in the film, every unexplained motivation, had to be covered in the books. Because the prequel films didn't provide enough information to understand what was going on, it was necessary to turn to the books to get it. And because the prequel movies didn't provide any insights into character, character had to be provided in the books and comics.
A particularly terrible example of something that should have been in the main film itself? The novels explained that it was Captain Panaka - the pessimistic general devoted to protecting Amidala in Episode I, and the only rational, clearheaded guy in the entire film, who told the Emperor that Anakin and Amidala were secretly married. The finished films never explain this point! How did the Emperor know this? Panaka, interestingly, was another character from the prequels that I liked, a character I thought had potential...especially since, as an old friend of Palpatine, a guy that believes in a strong military and law and order, became a Grand Moff during the age of the Empire.
Incidentally, I never minded something that drove other people up the wall: the fact General Grievous coughed. I always assumed he was using an early version of the technology that was later perfected for Darth Vader.
Posted by Julian Perez at 10:12 PM

"Incidentally, I never minded something that drove other people up the wall: the fact General Grievous coughed. I always assumed he was using an early version of the technology that was later perfected for Darth Vader."

The reason this drove people up the wall was because it was never explained that Grievous was a cyborg. Alot of people knew that coming in because of the books and/or the Clone Wars cartoon but there were those who read/watched neither so they couldn't understand why you had a coughing robot.

I never made it to Episode 3, but Grievous sounds cool, if only because I liked both versions of Robotman (Bob Crane in the 40s and Cliff Steele in the 60s) in the comics.

If it's true, though, that the only thing human about him is his brain, I can see where people would be upset about the coughing. No lungs, no throat = no cough.

Yeah, I guess if you hadn't read the book and just see him as a robot - instead of a robot with a human brain - that might look a little weird and inexplicable.

As for the 40s and 60s Robotman, I always thought he would make a much more frightening and interesting villain than hero. If he's a villain, his human brain would be used to make him sympathetic, pitiable and complex instead of a vicious monster.