Chuck Heston's been dead for a while now... 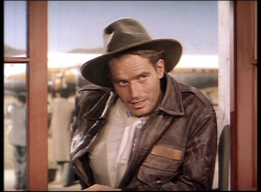 ...so is it finally far enough away from his death that we can all be objective and say he was a mawkish, hammy actor?
Biblical and Ancient Roman epics are my least favorite genre of all-time. They're always dead serious - with "dead" being the operative phrase. They're infuriatingly self-important, with pompous dialogue and grandiose but cold characters that lack anything like a sense of humor or humanity. Surely even the Ancient Romans must have laughed sometime.
As a human being, Heston was classless and tasteless (like when he held a gun rally in Littleton, Colorado two weeks after the Columbine massacre) so it makes sense to me that the only roles I've ever truly accepted and liked him in were ones where he played amoral, mercenarial and slimy guys like in "Secret of the Incas." The role was perfect for him, and he really did great in the part. People point to that film as being the beginning of Indiana Jones, but I see a little more of Han Solo and the dark streak that made him compelling.
Ordinarily it's unwise to link to material on YouTube, but the beautiful part here is that "Treasure of the Incas" is public domain now. An extremely enjoyable crime/adventure movie.
Posted by Julian Perez at 7:31 AM

I thought it was understood that Heston was mawkish and hammy. Certainly I remember a lot of parodies on shows like SCTV. But I got the impression that was part of the appeal; he was sort of like an A-list Shatner.

My favorite Heston role was The Omega Man. I kind of soured on him with "Earthquake," though, when he saved most of Los Angeles only to sacrifice himself for his shrill cow of a wife (Ava Gardner, brought to ruin at this point by Father Time) when he had a perfectly yummy mistress waiting for him (Genevieve Bujold). Not the ending one hopes for after sitting through two hours of cheesy effects and (shudder) Marjoe Gortner.

My wife got to talk to Heston once and found him charming. But then again she married me, so there's no accounting for taste.

Thanks for the heads-up, I'll be sure and seek this one out.

I still can't get over his horrendous cameo in Burton's version of Planet of the Apes.

"I thought it was understood that Heston was mawkish and hammy. Certainly I remember a lot of parodies on shows like SCTV. But I got the impression that was part of the appeal; he was sort of like an A-list Shatner."

Same here. I remember Phil Hartman making fun of him on SNL

Was this cameo the one where he was on his deathbed and talked about how awesome guns are? The only conclusion I came to about that scene is that the director was making fun of him.

As for Earthquake...yikes. I have to change my statement now: how can Ancient Roman epics be my least favorite genre ever when disaster films exist? I always remembered a quote by Freud who said that we only think about disasters when we long for them to happen, and disaster movies always represented that kind of misanthropic wish.

The Heston film on youtube is actually called SECRET OF THE INCAS. How can you hate Charlton Heston disaster movies .... haven't you ever seen the ridiculously terrific AIRPORT 1975 lately"