The Myths of World War II: How We Learned all the Wrong Things 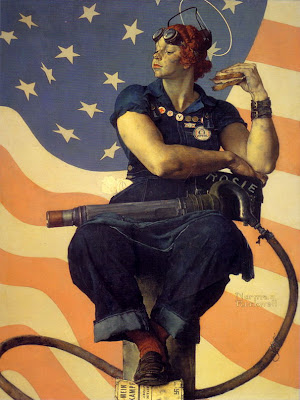 One of the most frustrating things about history education in the United States is that it seems like our history courses start in 1939 and end in 1945.
This is reflected in our popular culture and discussion about world affairs, where every enemy is seen as the Nazis and it is always 1939, and those that strive for diplomatic solutions to problems are tarred as "Chamberlain-like appeasers" despite the fact that the situation is frequently different.
What's worse is that almost everything Americans know about World War II is either wrong, or a simplification of a complex situation. It's all to create a huge national myth about World War II and the Greatest Generation.
A few things to keep in mind about the narrative of World War II that we think we know, but we actually don't:
Chamberlain and the French. Chamberlain's name in the United States is synonymous with appeasement and cowardice before the power of the Nazis, a starry-eyed idealist that was tricked and bamboozled. In reality, if Chamberlain really believed in "Peace in Our Time" he would not have been re-arming and re-militarizing Britain. Chamberlain was a smart guy that saw the writing on the wall: in any battle that the British fought with the Nazis, Britain would have been totally creamed. In fact, the ability of Britain to even fight owes more to Chamberlain than to Churchill. This brings me to my next point...
The Cult of Personality of Winston Churchill. A British friend of mine was always amused by the American valorization of Churchill. When I asked him how most Brits felt about Churchill, the response was along the lines of, "the war was fought between two lunatics. Thank God that our lunatic won!" As I said before, any scenario where the Nazis outright invaded Britain (Operation: Sea Lion) would have resulted in a Nazi victory. The real reason that Britain survived was not due to Churchill and his oratory ability and determination to fight, but to the fact that Hitler was insane, refused to attack his racial brothers, and believed that Britain would support him once he attacked the Soviet Union. If the Germans actually did invade, Winston Churchill's woofing and posturing would have been revealed for what it was: "We will fight on the streets...for five minutes. We will fight in the field...for five minutes." This goes to show that Americans have a terrifying preference for woofers prancing in cowboy boots over actual heroes. How it was that a real war hero like John Kerry was presented as the anti-military candidate while a cowboy-hat wearing pansy like Dubya I'll never understand...or, in the interests of being bipartisan, how a real honest to goodness American hero like George Bush Sr. that delivered the only real decisive American victory since WWII, Gulf War I, was eliminated in favor of a guy that talked and looked like my high school class president. 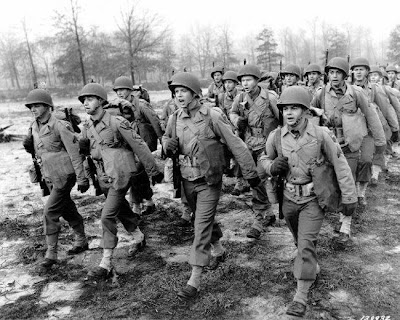 The role of the Russians. Ask most Americans in which country most World War II battles were fought, and they probably wouldn't answer Russia, but it is true. What's more, Russia suffered more casualties and suffered the greatest financial losses of any country in the entire conflict. In the long-term, the seige of Stalingrad and the Russian winter did much more to destroy the Nazis than the D-Day landings did. In fact, if World War II could be summarized in a single sentence, it would be "Germany vs. Russia." It's only natural to take pride in our very crucial American role, however, the presence of Russia is inconvenient to the American narratives of World War II: it was a time when the world faced a great evil and the world united to destroy it. The idea that World War II was a grimy, ugly conflict that was the story of a bully that was beaten because it met a bigger bully destroys all the high-minded mythology that Americans have developed around a morally gray conflict between two equally genocidal and vicious combatants.
If you were to ask me why these myths persist, I would say that they are very, very attractive to authoritarians. A country united and with purpose, speaking in one voice instead of the rabble, must be absolutely fascinating to people that view disagreement as a weakness instead of as a strength.
In many ways, the conflict that has much more practical, applicable and useful lessons to us today is actually World War I, which is far less understood by Americans. Kennedy, a president that whatever else can be said of him was actually brilliant and read extensively, managed to avert the Cuban Missile Crisis because of Barbara Tuchman's book The Guns of August.
In brief, the lessons of World War I are:
If you believe that war is inevitable...it becomes inevitable. Lots of Germans and British wrote books with titles like "The Moral Right to Make War." Indeed, what made an unecessary and nearly accidental conflict like World War I possible was the assumption on the part of everyone that everyone else's motives were hostile, aggressive and belligerent. The fact this lesson wasn't learned by anyone but John Kennedy really makes me wonder how the world survived the Cold War. As Carl Sagan frequently pointed out, a comet hitting the earth in either the United States or the Soviet Union would be indistinguishable from a nuclear First Strike.
This self-fulfilling prophecy nature of warfare and hostility also explains the single biggest foreign policy boner of the entire bonerrific Bush years: the creation of a nuclear missile shield in Poland near Russia, which soured a potential ally to the United States for an entire generation for no real reason that I can detect. In fact, considering the role Russia played in supplying the Chavez government, there is a real question of how this boneheaded and unecessary act of hostility led to greater world instability and anti-US sentiment. There was a wonderful article in The Economist that argued that the only role of a missile shield in Poland would be to give the U.S. first strike capability. All this a decade after the end of the Cold War! People often whine that Obama got his Nobel Prize in the field of not being Bush, but dismantling that shield actually has resulted in a much safer world.
Wars inevitably lead to other wars. This is something to keep in mind when any general or politician calls a conflict "decisive."
It's possible to have a war where all sides involved lose. This is even more true when it involves nukes. And it is further possible to have a war that destroys even the winner - a place as a world superpower is not eternal or guaranteed, but is contingent on sane and rational decision making.
Posted by Julian Perez at 2:07 PM

Ha ha ha, but you didn't post on April 1st

Your other points are spot-on, but Churchill was absolutely correct regarding Britain's ability to stop an invasion (i.e. Sea Lion). Germany was woefully under-prepared for amphibious invasion for the reasons you indicate (Hitler thought the Brits would support him against the commies) but Churchill was also right (post-1939, the Germans had no capability to invade; the real threat to the UK was the submarines and starvation). Witness how much effort the US and UK together had to do to set up D-Day, creating specialized landing craft, assault vehicles, and so, with far greater air and naval superiority, and even then it was a near-run thing. Post-war exercises run by the German and UK war colleges actually did a wargame test of sea lion as planned, and they also showed it would have been a disaster.