What is a hate crime? 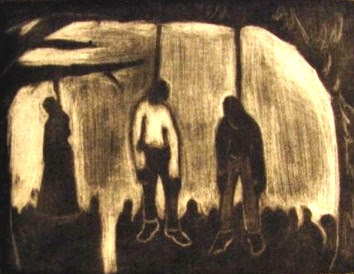 One of the more interesting arguments against hate crime legislation is that hate crimes are problematic because they criminalize intent as opposed to action and behavior.
To that, I respond this way:
Hate crimes do not have a higher penalty because of intent. Hate crimes have a higher penalty because of their practical, real-world effect: they intimidate, silence and terrify an entire community. The reason that there are greater penalties beyond just that of the initial act itself (murder, rape, violent assault, etc.) is that a hate crime makes the community of the victim (particularly vulnerable minority communities, especially blacks) frightened and intimidated. The effect of events like lynching has, historically and presently, been to frighten and silence black people (and other groups).
Crimes have effects that transcend just that of their victim. Crime lowers property values because people feel more anxious and less safe. Crimes create an atmosphere of fear that go beyond one individual action. This is why terrorism should have higher penalties associated with it (although I don't agree with the legal action that a crime somehow transcends traditional law enforcement because of its nature).
Not only that, but hate crimes create racial distrust, disharmony and tension that is really destructive to communities in ways beyond just any individual action.
Finally, crimes are penalized not just because of the act itself, but because of what the crime acknowledges and says about the perpetrator, that they've shown traits that forfeit their right to be considered human. Racism - in the vicious form that motivates and makes a hate crime possible - is one such characteristic. All of these things are taken into account in the highly interpretive process of sentencing. For instance, the more helpless the victim, the higher the sentence. Robbing a child or a grandmother usually gets a higher sentence because the savagery and sadism of that crime against a more helpless victim, shows far less humanity. In many cases the law acknowledges this, and something like higher penalties for a hate crime isn't new.
The only way that liberals can refute the idea that we're soft on crime is to not be soft on crime. I never thought that I would ever say the same to conservatives - that they're the ones that are making excuses and apologizing for human slime. Hate crimes cannot be tolerated, and racism in society is not acceptable. Period.
Posted by Julian Perez at 11:49 AM