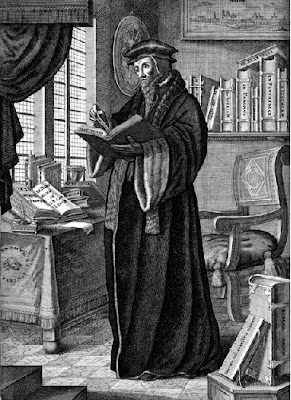 WARNING: this article requires a finely calibrated sense of satire. A good rule is, if you can't tell that Ed Anger and Steven Colbert are not really conservatives but are in fact goofing on conservatism, you probably won't get the joke here. And thus, become a part of the joke.
There are several writers of the blog "Calvinists 4 Conservatism." One of them is, by all appearances, a pretty normal and earnest guy that doesn't care for atheism and tries to use religion to make sense of disasters in the world in a way that shows real thought. I don't agree with him at times, but he's obviously the real deal.
The other one is a guy so laughably over the top that it's obvious that he's a liberal that's totally infiltrated this webpage, by the name of "Objective Scrutator." The fact that nobody on that website has figured it out is the best thing ever.
He amps the rhetoric up to such insane levels that it's funny and somehow perverse that there are actually people that find themselves agreeing with him. For instance, he defends Uganda's insane laws that punish anyone knowing someone is a homosexual and not reporting it with seven years in prison. Cheering on this obviously inhuman law is a direct satirical attack on conservatives' heartlessness and lack of concern about global savagery toward homos.
And what's more, his posts are a thing of beauty. Under "Turmoil in the Toybox," he's got this to say:
"There are other wicked cartoons, too. For starters, The Care Bears will indoctrinate your children into Hinduism and sodomy."
"The Big Bang goes against the 6000 year doctrine that has been repeatedly proven time and time again as Darwin, a man who had carnal relationships with Galapagos Tortoises, is continually revived by atheists and anti-Americans, so as to provide the antiChrist with legions of soldiers."
"I was seriously worried that I may grow lax on children’s cartoons, and perhaps allow my young children to expose themselves to the left-wing demons of pornography, the occult, and other Helioleftist Eratosthenian rubbish. "
The question here is, did the blog start as a joke and they just looped in some earnest but thickheaded guy into it, like Jolt from the Thunderbolts, who actually thinks they are heroes instead of criminals pretending to be superheroes in a scheme?
Posted by Julian Perez at 1:10 AM