"Mysterious Cities of Gold" and the similarities to "Avatar" 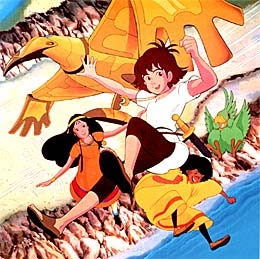 The similarities between “Mysterious Cities of Gold” and the now extremely popular “Avatar: the Last Airbender” are downright shocking. Both are Western-produced shows with a single story from beginning to end, an Anime-inspired look that aired on Nickelodeon (20 years apart!) with three kid main characters, one of whom is a levelheaded girl, the other two are the last survivor of a vanished tribe and a Messiah figure with powers he doesn’t understand. The kid characters have access to an animalistic means of flight (the Golden Condor and Appa the flying bison, for instance) and the structure of the show has them in a different place every day, as the characters hide pursuit from both a conquering army and a complex, charismatic antihero. In both shows, the majority of the protagonists are non-Caucasians, and finally, both have a cute flying animal kept around for “comedy” and cuteness. Both the Messiantic lead boy and the tribal girl lead develop feelings for each other.
Because the charismatic antagonist pursuing the children became too likeable a character and his motives too complex, the solution to having a really effective antagonist was, a third of the way through both shows, to introduce a female enemy that’s absolutely vicious and rotten to the core: La Malinche in Mysterious Cities of Gold and Princess Azula on Avatar. 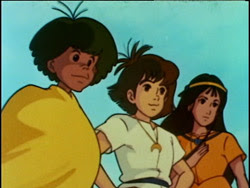 The reception to both shows was similar: both are very well-remembered fan favorites with a hardcore following made at a level of quality that stand head and shoulders above the often uninspired world of kids’ TV animation.
Obviously “Avatar” is a unique creation, but it might be interesting if that show was created because somebody remembered “Mysterious Cities of Gold” and tried to do it another time around.
Finally, and I say this hesitantly, it seems that both shows will receive a sequel in 2011…though the “Avatar” one is much further along.
Posted by Julian Perez at 3:03 AM 1 comment: