If you don't get the joke, you're a part of it 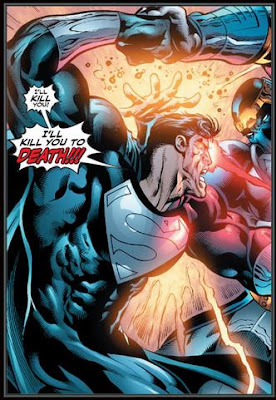 "I'll kill you! I'll kill you to death!"
A textbook example of the phenomenon where, "if you don't get the joke, you're a part of it" would have to be Superboy-Prime, a villainous character that goes on a lunatic rampage when other heroes break his insanely exacting standards of what constitutes heroism, and in so doing parodies lots of old school fans that think this or that hero is RUINED FOREVER by once in a while demonstrating their human nature. The character's whiny rants hit a little too close to home for many old school prudes.
What they don't get though, is that their "we are not amused" reaction actually increases the entertainment value of the character! It's sort of like how Bill O'Reilly's attempts to boycott records actually increase their sales.
The character's overused and played out, which goes to show that even the funniest jokes can eventually die from exhaustion. But for a while there, Superboy-Prime gave me a glorious schadenfreude explosion.
Another, more frustrating example of this phenomenon would be the absolutely savage Family Guy parody on South Park...for the simple reason that Seth McFarlane didn't play along, and said he thought the South Park satire was "very funny." I find that monstrously upsetting because...well, you're not supposed to get it and play along - that parody was an attack at your expense, so massive, so merciless that the only way McFarlane can just let it go is if he's either biting his tongue so as not to look like a humorless dick, or he honestly just didn't get it. Either way, it's disappointing.
I always thought that Family Guy's attempts at shocking humor were a little gutless because none of their shock-value gags were at the expense of anyone that enjoyed the show. For instance, a lot of their gags are based on spoofing uptight, prudish religious and fundamentalist nuts. My question is...what uptight, fundamentalist religious people watch Family Guy, anyway?
Posted by Julian Perez at 3:31 PM

Well I can think of a few.

1. The morality Police kinda person who watches so they can WARN you about all the filth so you're not shocked when Stewie makes a sex joke.

2. on a related note, the person who has apparently been living under a rock or in a cave and never seen an episode before and is therefore surprised when they see something shocking like Stewie makinga sex joke or anything involing that old guy who has a hard-on for Chris

The morality Police kinda person who watches so they can WARN you about all the filth so you're not shocked when Stewie makes a sex joke.

You're talking about the Brent Bozells of the world, right? That guy complained about a show as cheesy and wholesome as "Ugly Betty" because it featured homos - despite the fact that "Ugly Betty" won awards as one of the most family friendly shows in primetime. Brent Bozell always struck me as the kind of guy that would be offended if his own wife came on to him.

The Bozells and Tipper Gores of the world are old news, though. They're like Saruman at the end of the Two Towers: allowed to live in their castles because they have no more power anymore. They're figures of fun instead of people to take seriously.

Something happened, though, with humor, since the eighties: a whole crop of humor, particularly Family Guy, rose up that found it very profitable to be outrageous, but a very cowardly kind of outrageous that doesn't attack its audience but people its target audience (college kids and stoners) don't like, like religious people and the horribly unsexy Sarah Jessica Parker.