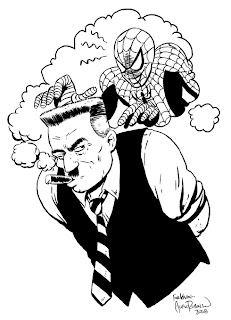 Well, the J. Jonah Jamesons of the world are at it again, wondering if Israel is a threat or menace after the latest encounter with a Gaza Flotilla. Supposedly the ships were there to give humanitarian aid to the people of Gaza, which is great, except that plenty of access already exists, provided by Egypt and Israel....too bad that both Israel and Egypt are both dedicated enemies of the terrorist organization Hamas, guys who dislike Israel for obvious reasons and Egypt because of its secular, non-theocratic Muslim government.
The fine folks that put the flotilla together were not exactly your friends of humanity. The people that organized the flotilla were the Turkish organization Insani Yardim Vakfi, who have extensive and copious links to not only Hamas, but the Muslim Brotherhood and Al-Queda. Heck, one of their activists, Izza Shahin, was arrested for providing hundreds of thousands of dollars to Hamas directly. When you have an organization that is known as a supplier of anti-Israel terrorists, you have an absolute commitment to getting them to stop sending weaponry and other devices....especially when they're going in a circle around the traditional aid route.
Israel's response was rational and cautious. It warned the flotilla that if they wanted to deposit aid, they could dock at Ashdod and do it from there. Even so, the flotilla refused to turn back even after being warned the commandos would respond with force if necessary. Even so, when commandos hit the deck on the ships, they were attacked by firearms, firebombs, and there is even video footage of one of them going overboard. It was a lousy situation to be sure, but one that that was entirely the creation of the Insani Yardim Vakfi and the freighter passengers.
Posted by Julian Perez at 5:37 AM