You know, "Star Wars" was actually pretty cool once 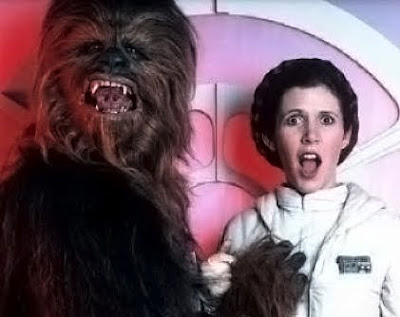 There was a time when "Return of the Jedi" was considered the worst of the Star Wars movies. I can only bitterly laugh at how naive we all were.
I've been angry at Star Wars ever since the prequels were released. They came to symbolize for me everything that is wrong with our current film culture: showy, grotesque, bloated movies that emphasize action and special effects over characters and story that the audience can get emotionally involved in.
It took a while, but recently, on one of my quieter days, I saw the original Star Wars movies again. And you know something? They were actually something! I can see why my brother's generation thought they were the greatest things of all time, especially in an era when nobody made escapist, smart adventure films aimed at teenagers and adults, let alone science fiction movies! They weren't b-movies either...Star Wars had a way of making their imitators look like shabby copies.
The movies were incredibly smart. They didn't have any cute little kids, which doom the ability to take anything seriously. There were no comic relief characters. Wisecracking Han Solo and the dry, deadpan Princess Leia were funny enough just by being who they were. Sure, there were those two lovable gay robots, R2-D2 and C3P-0, but the humor came from them being who they were: C3P-0 was timid, cowardly, and fussy, whereas R2-D2 was a spunky, courageous little runt firebrand that followed orders from humans, but the way he thought was best.
It was possible to love the characters because of what close friends they were. Han Solo and Luke were friends that risked their lives for each other; and C3P-0 and R2-D2 fought each other constantly but they needed each other.
The dialogue was quotable. Huge swaths of the Empire Strikes Back are watchable not just because of the special effects, but by another element that is even harder to do: the chemistry and witty, confrontational rapid-fire repartee between Han Solo and Princess Leia. My favorite was this great scene from "Return of the Jedi"
HAN SOLO: "Hey, kid! How are things?"
LUKE: "Oh, same as always."
HAN SOLO: "That bad, huh?"
A few insights that I had when watching the films:
1) Most characters in the original series were human beings. 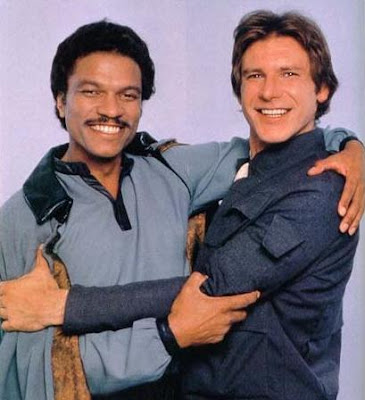 This was one example of a place where the limitations of money became a strength. In general, if there isn't a really compelling reason to make a character a non-human alien...don't do it! In the prequel films, to say nothing of science fiction in general, some characters are aliens or monsters or robots just because. This is a problem because there is much, much more to creating a likable or distinctive character than just making them a weird alien race. The use of makeup, prosthetics, and worst of all, CGI, became a crutch. Why give someone distinctive mannerisms or a personality the audience can like when you could just give them a squid's head or make them a cartoon rabbit or a four-armed fat-ass running a fifties diner?
The fact that the majority of characters in the original Star Wars were humans also lent some believability to it all. Aliens were used sparingly, or to used for specific effect heighten the exoticism of certain moments (like the cantina scene or Jabba's palace), but the fact that the characters were all humans instead of cartoon rabbits gave Star Wars a real maturity and believability. Yoda and Chewbacca were both weird creatures, but that was done with a point in mind: Yoda was a small, weird little thing because that subverted our expectations that a great warrior would be someone mighty and physically imposing. Likewise, Chewbacca's character is a big scary animalistic monster, but who is also strong, friendly, loving, and loyal. They were aliens, but there was a reason for that.
2) Lightsabers were used sparingly. 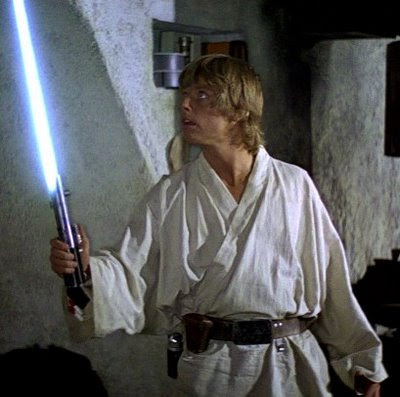 I hadn't realized this before, but Luke Skywalker and others use the lightsaber amazingly rarely, and it was typically his last resort - even when confronted with something as scary as the rancor in the "Return of the Jedi," he defeated it entirely by his wits instead of by pulling out his laser sword gadget. It also made me think about what exactly made the lightsaber cool in the first place.
The lightsaber was a cool and wondrous science fiction device because it was underused. It flickers on the screen for brief moments through most of the film, and really builds up to the sensational duels that typically happen at the end. One of the problems with the prequel films is that constant use of lightsabers, so not only does this weapon seem debased and ordinary, but ultimately, all action scenes end up looking alike.
3) Boba Fett was awesome.
Boba Fett was a minor character that immediately set our imaginations on fire. He dressed like an Ancient Roman. He had more gadgets than Iron Man and Batman combined. He had an aura of quiet coolness. And best of all, he went down in Star Wars history as the bounty hunter that outsmarted Han Solo.
The character was obviously based on Clint Eastwood's "Man With No Name," who also dabbled in bounty hunting. It wouldn't surprise me if the notes in the script were for a "Clint Eastwood type." It also goes to show that despite the fact Westerns have disappeared it's impossible to understand 20th Century film without them.
4) Darth Vader was frightening. 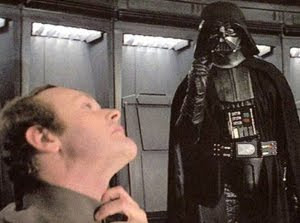 Like Tarzan and Superman, Darth Vader has been weakened by familiarity and his transformation into a pop culture icon and a symbol just like the Coca-Cola logo, to the point where it's almost shocking to go back and discover what a supremely awesome creation he was. Watching Darth Vader in the original movies is like watching Godzilla 1985 or the 1954 film: a reminder that this character was meant to be terrifying, surrounded with an aura of unstoppability and dread.
Before his helmet was a pez dispenser, Darth Vader was a frightening figure of pure intimidation, a hideously disfigured, ruthless evil sorcerer. During his battle with Luke in "Empire Strikes Back," Vader was toying with him: he could have killed Luke at any time. Darth Vader's hunches are always right, and he is absolutely unforgiving of failure. With his unnatural powers, he can choke and kill and even render the attacks of heroes superfluous. Who can forget the tantalizing scene where Darth Vader's bald, hideously disfigured head was seen briefly? Darth Vader and his personality totally dominates the action of "Empire Strikes Back." The interesting thing is that "Empire Strikes Back" is sort of like a reverse-Lord of the Rings: the good guys never win once.
Here's something I always wondered about Darth Vader: how come they never really used or mentioned again, after "Star Wars," that he was a supremely skilled, ice-cold starfighter pilot? That was always one of the most distinctive things about him: he wasn't above getting his hands dirty. In fact, Darth Vader was like a cross between Doctor Doom and the Red Baron.
The revelation that Vader was Luke Skywalker's father was so shocking, so effective, that I have trouble believing it was entirely Lucas's idea. In several interviews in 1980, Lucas flat out said it was Leigh Brackett's idea...though the more distance was put between him and that cool old lady's death, the more the story changed. Vader being Luke's father turned the character around and made us see him in a totally different light: instead of an uncomplicated embodiment of evil, he was a person with a connection to others.
People like to say that it's good when a character is "complicated," but what does that actually mean? Complexity is when someone is a combination of characteristics, some of which are contradictory - like when the Rutger Hauer cyborg in Blade Runner showed compassion, or when Nazi villains in war movies are shown as good fathers.
By the way, I was absolutely shocked that Vader actually died a hero, something that I had totally forgotten.
5) I actually liked Princess Leia.
Here's what I think is genius about the casting of Carrie Fisher Simon: she was not a knockout babe blonde bombshell, or a sexy exotic Latina or something like that. She was petite and slim, more like Audrey Hepburn than like, say, Kim Basinger or Elle MacPherson. She was such an oddball casting choice it had entertainment value for that reason alone. Carrie Fisher has an ethnicity that is undisguisable, like Joe Pantoliano, who never plays just guys, but always Italian guys. Even in a galaxy far, far away Carrie Fisher is almost comically Jewish.
Princess Leia could have been the campiest character in movie history: a snotty, entitled princess that uses the royal "we." Instead, she was almost like a gutsy female spy, good with a blaster, with a dry, caustic, sarcastic sense of humor. There are only occasionally moments that anything like haughtiness comes out, which they did with a great light touch, like when she calls Han Solo a scoundrel. It was little, subtle things that made Princess Leia memorable: at the beginning of "Empire Strikes Back," for instance, she was running a computer console along with the working stiffs on the hellish Hoth base. She gave off the vibe of a dedicated, competent and professional person with good organization and management skills.
Above all, the key word to her characterization is subtlety, yet she never feels like she doesn't have any personality. I was amazed at how much I liked her character.
Posted by Julian Perez at 6:05 AM

I find it funny that Boba Fett is considered so bad@$$ even though he barely appeared and ended up going out like a punk.

And say what you will about the Ewoks, at least for every bit of comic relief there were scenes showing them to be crafty and intelligent warriors.

Hey, who said anything about the Ewoks? Personally, I liked them: they were a savage stone age society that reminded me of little furry versions of Robert E. Howard's Picts. I always loved the Ewok cartoon, at least before it became crap about bears learning to share and care, and focused on details of primitive life in a hostile alien world. Did you know Paul Dini was the head writer on the early seasons of Ewoks?

As for annoying characters...once again, if the Ewoks were thought to be Star Wars's most annoying characters, I can only laugh at how naive we were in the days before the prequels, which gave us not only Jar-Jar but something far worse: Hayden Christiensen's femmie voice.

I knew about paul Dini. Did you know Stuart Copeland of the Police was the one who sang the theme to the Droids cartoon?

As for the Ewoks, I think some just disbelieve that a race of aggressive teddy bears could take down Imperial Stormtroopers. There's seems to be this idea that the fact the Imperials had AT-STs, Speeder bikes, and lasers was enough for them to dominate the Ewoks in a fight.

Do you drink Coke or Pepsi?
SUBMIT YOUR ANSWER and you could get a prepaid VISA gift card!