Long-Dead Cliches That Are No Longer Used 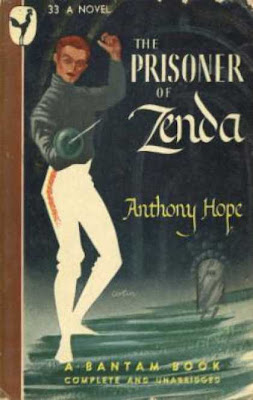 I was recently reading Edmond Hamilton's "Star Kings," a pulpy novel that is easily one of ol' Planet Smasher's best, when I realized that this story pretty much had the same exact plot as "Prisoner of Zenda."
"Star Kings" made me want to go back and read "Prisoner." What startled me about "Prisoner of Zenda" is that this book was the starting point of cliches, but cliches that are no longer referenced or used today. As surprisingly humorous and complex a book as "Prisoner of Zenda" was, it was oddly melancholic to read now...perhaps because the idea of something as crucial and influential to adventure novels, that spawned so many imitators, has mostly evaporated from the pop culture stage. It goes to show the short lifespan of adventure and escapist fiction.
For every adventure writer like Jules Verne that is constantly discovered by new fans, there are others that have been forgotten: J.H. Rosny, for instance, the pen name of a pair of brothers that were once considered in their native France to be the equal of Verne in the development of science fiction, best known for three books: "The Xipehuz" (which featured some of the most frightening, non-anthropomorphic, incomprehensible and otherworldly aliens ever), "The Death of the Earth" (mostly worth reading only for the moving last three pages, which describe the last being on earth winking out of existence) and "Quest for Fire" (best known for becoming a truly awesome film by a visionary genius director like Jean-Jacques Annaud).
There are other examples of cliches that were once exasperatingly universal but now are nowhere to be seen: 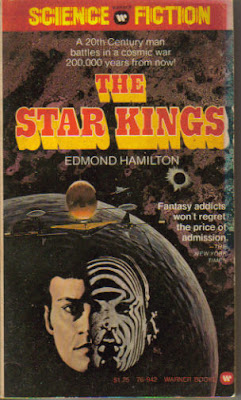 The Small European Country Adventure Story
In this story, typically identified with "Prisoner of Zenda," a tiny postage stamp sized central European country is under threat, and there is usually a problem with succession to the throne, a position that is offered to a foreign adventurer (who usually looks like one of the royals). There are lots of picturesque Disney castles and gallant fencing duels. One of the best such "Zenda" imitators is "The King Maker," one of the greatest of the Doc Savage novels, where Doc is offered the biggest bribe of his entire career: the throne of a tiny country. One can even argue that Doctor Doom's tiny nation of Latveria owes a lot to this now-forgotten subgenre.
It's not particularly hard to understand why this genre isn't seen much anymore. There aren't any more tiny European nations with royalty.
The Evil Chinaman
The mystery and crime novel market was once so utterly and totally choked with Fu Manchu imitators that by 1929, a prominent mystery guide wrote that "in a mystery, no Chinaman should be involved." It's not hard to understand why this cliche went by the wayside: it was mean-spirited and racist, paranoid about an immigrant ethnic group. It's hard to understand how hysterically paranoid white people were in the early 20th Century about an impotent non-power like the Chinese, surrounded on all sides by colonial rulers. Typically, the evil Fu Manchu character was such a genius, with such great planning ability and Oriental style, that he totally dominated the books that were written about them. Typically, the Fu Manchu genius had a sexy daughter, who was usually implied as promiscuous and sexually perverse, as warped and evil as Dad himself. One can even see Ming the Merciless as a sort of Evil Chinaman, in a sense: he certainly had the facial hair for it. 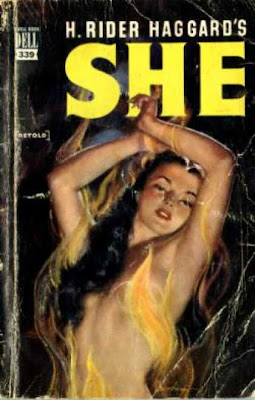 She-Who-Must-Be-Obeyed
Like Fu Manchu, an entire library could be filled with nothing but books that are inferior imitators of She-Who-Must-Be-Obeyed, the title character that was the beautiful, brainy and hypnotic sorceress of H. Rider Haggard's jungle adventure novel She (incidentally, Sigmund Freud's favorite novel). The beautiful, immortal, intelligent Ayesha was a white queen that ruled over an African tribe. She inspired a diversity of characters including Tarzan's archnemesis, La, High Priestess of Opar.
Startlingly, the evil, forbidding native queen has mostly vanished off the radar of pop culture. Perhaps she went offstage, hand in hand, along with the only man truly worthy of her: Fu Manchu.
The Stone Age Regression Novel
The best known example to modern audiences may be Jack London's "Before Adam. " The essence of this sort of book is one where a modern person, typically through the dubious mechanism of past-life regression or the collective unconscious, re-experiences the experiences and memories of a person alive in the Stone Age. Professor Challenger did this as well in one of the more ugh-inducing of the Lost World sequels - a series that jumped the shark pretty laughably when Arthur Conan Doyle converted to spiritualism. A better known example may be "Allan and the Ice Gods," featuring Allan Quartermain...incidentally, it was this book''s use of the past-life regressive hallucinogen Tanduki that suggested to Allan Moore that Quartermain might become a drug addict, a big plot point in "League of Extraordinary Gentlemen." 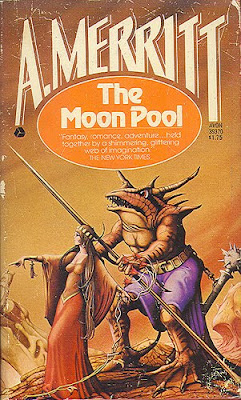 The Lost Race Yarn
This one took quite a bit to die out, but the Lost Race Yarn typically featured protagonists that discovered a hidden or secret society or civilization that is long thought extinct in a distant, unexplored region of the world: the Himalayas, the African Congo, the Antarctic, etc. The civilization that is most commonly found in Lost World yarns are almost always Ancient Roman, to the point that a lost city of Ancient Romans that survive to modern times is practically a sub-sub-genre in and of itself.
The best written book of this type, though not the most famous, is easily A. Merritt's "The Moon Pool," which I wholeheartedly recommended for its horror and humor.
Sometimes, though, the Lost Races aren't even human. Inspired by crackpot beliefs in cosmic evolution like Theosophy, many stories feature a hidden or underground cavern world. The most famous of these is Edward Bulwer-Lytton's "The Coming Race," about a blond race of superpowerful giants. Edward Bulwer-Lytton, incidentally, is best known as the writer who actually invented the cliche opening line, "It was a dark and stormy night."
What happened to the Lost Race Yarn? Well, the world became so well explored that the belief in a lost race or two became downright implausible to people in the later years of the 20th Century. So much is the pity. Of all the reasons for a story to go out of style, this troubles me the most: a story type that died because our world is mapped, explored and understood totally and completely.
Posted by Julian Perez at 11:53 PM

"a story type that died because our world is mapped, explored and understood totally and completely."

There are still a few unexplored places. the thing is they're underwater and the Atlantis trope has been done to death

I always figured this was a key reason Indiana Jones was a period piece; the 30s were at the tail end of that era where it still seemed there could be things left to discover, possibly because they'd unearthed Tut's tomb a decade earlier.

Increased familiarity with reality probably also accounts for the "tiny European nation" story. Even allowing for Americans' notorious ignorance of geography, if such countries existed, we'd likely have heard of them. If it makes you feel better, though, you could always rent that recent classic of the genre, "Beautician and the Beast."

Aside from the inconvenient fact that China is an Earth nation, Ming the Merciless was without doubt meant to be Chinese. And didn't Buck Rogers also war with the "evil Mongols" or whatever? That whole "yellow horde" routine never made any sense to me. I guess you had to be there, but it sure does date a work.

There are still a few unexplored places. the thing is they're underwater and the Atlantis trope has been done to death

James Cameron always astonishes me for his scientific literacy, and "The Abyss" pretty interestingly explained the type of life that might be found in the deep.

Incidentally, the most common condition on the surface of the earth...more than desert or tropics, is the Abyssal Plain.

I always figured this was a key reason Indiana Jones was a period piece; the 30s were at the tail end of that era where it still seemed there could be things left to discover, possibly because they'd unearthed Tut's tomb a decade earlier.

I always attributed it to Spielberg and Lucas's nostalgia for "Old Hollywood." I once found online the typed up notes for the discussion where Lucas and Spielberg proposed Indiana Jones, and what's interesting is how many references there were to Clark Gable, especially his role in "Soldier of Fortune." Only Toshiro Mifune was brought up more.

I kind of see your point. I do wonder though, if a lot of these stories based around Lost Races and unexplored zones were made possible because people were a lot less knowledgeable about certain regions of the world, so they could much more readily suspend disbelief.

Today, we think of places like the Arctic and Africa as very real locations, with a history of their own. In a savvier world where most people can identify the difference between Maasai and Dinka, where Tutsi genocide makes the evening news, it's harder to really swallow something like a Lost City of Gold.

Buck Rogers did indeed fight evil Asians, who apparently ruled the earth...but only in his first story in his first appearance in "Amazing Stories" all the way back in the late 1920s. It should be pointed out that the villains in the original 1928 Buck Rogers story were of entirely earthly origin in a future where the Chinese race ruled earth.

It was the Buck Rogers movie serials that brought in the considerably less offensive, but nonetheless scary idea that the world of Buck Rogers was misruled by criminal cartels, who just grew so huge that they ultimately became whatever organized power remained in the world. It was the serials, not the novels, that gave us Buck's archnemesis Killer Kane.

I always wondered if the Mongol-ruled earth from the novel of Buck Rogers was somehow related to the empire of Tsan-Chan, which in H.P. Lovecraft's work, was a necromantic asiatic civilization that dominated earth in the year 5000 AD.

It may have been Tsan-Chan that led to an Asian society even further in the future...namely, H.P. Lovecraft's fellow Weird Tales pulpster Clark Ashton Smith's creation, the future continent of Xothique, which has distinct Arabian Nights and Asian elements. But you know, with pulp this is an Ouroboros this kind of linking can just go on forever.

That reminds me...I have to do a post on Clark Ashton Smith. I always thought he was the most talented of the "Weird Tales" guys.