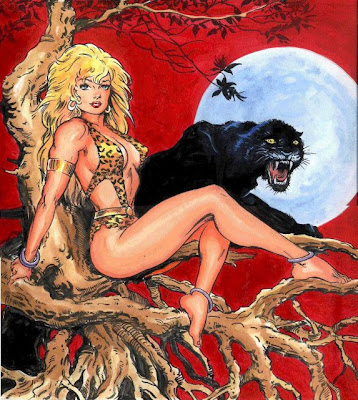 It's frustrating sometimes to know people with a singleminded devotion to a single topic, because it's all they ever go on about.
On the one hand, it is sometimes helpful to know people like this...for instance, I've had some friends that are autistically obsessed with trains who come in handy when I need some information on historical trains. 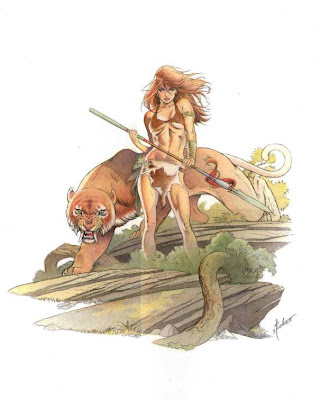 Another example would be this guy, who has an entire gallery devoted to the collection of "jungle girl" art. His need to collect is something that we all can profit from. Not only do we have some great comics art from the forties and fifties, but also sketches by some of the greatest artists that he meets up with at conventions: Amanda Conner, Darwyn Cooke, and so on. 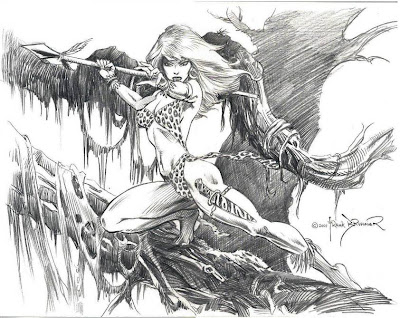 My personal favorite artist in the gallery is, natch, Frank Brunner - possibly my favorite comics artist of all time. He's also one of the few that drew a glamorous but sufficiently intense jungle girl that looks absolutely believable as a scary fighter, but also pure and uncorrupted. Frank Brunner's work was always mystical, stylish and dreamlike, muscular and awesome: some of the best art that I've ever seen in comics anywhere are his issues of Savage Sword of Conan. Whenever I think of Elric, I always think of Brunner's Elric comics in Heavy Metal, which gave Elric a glare and malevolence. I have no idea why he even slummed it in comics; he could do interior illustration for books, the way Gary Gianni and Frazetta did. 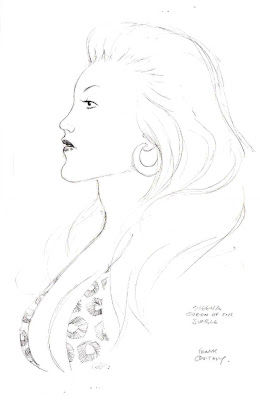 My least favorite is Frank Quitely. As you can see, his sketch gave his jungle girl a terminal case of man-face. Which is nothing but typical for the guy that made Wolverine look Mexican for some reason and made Superman look like Jay Leno. All the high profile work he's gotten (We3, X-Men, All-Star Superman) have one thing in common: he got that job by working with current fan-fave Grant Morrison...another guy that is inexplicably popular, thus creating an Ouroboros of terrible. He's wrong for superheroes, wrong for jungle adventure and sword n' sorcery, and as his overly busy designs are in We3, wrong for science fiction. Is there anything that he can do? At least Don Heck's romance and western comics were surprisingly good.
Posted by Julian Perez at 2:40 PM

I actually kind of admire guys like this for their sense of focus. I have the worst of both worlds; I get obsessed with subjects, too, but then I flit on to another one before I ever amass a complete (or even particularly impressive) collection of anything.

Jungle girls are not one of those obsessions, but I see this guy has a Mark Texiera page from that "Sheena" back-up in "Rampaging Hulk" (I *think* it was #9...the one with a frozen Hulk being hauled by the other early Avengers on the cover). That "Sheena" art job (with inks by Tony DeZuniga) introduced my innocent young mind to Lust, with a capital L.

The Quitely piece is the best one.

Quitely and Morrison are the only thing right about comics, these days.