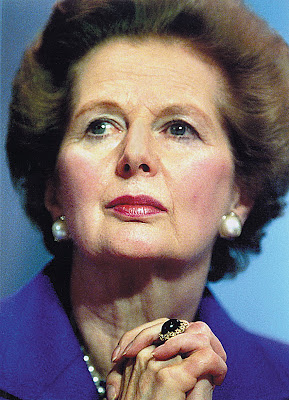 Et tu, Margaret? Et tu?
Don't tell me that you, too - one of the few politicians with a science background and a degree in chemistry - are supporting all that lefty claptrap and sinister conspiracy to promote global warming!
(I hope Bruce Coville will forgive me for borrowing the title of his book, Jeremy Thatcher: Dragon Hatcher.)

Here's an exerpt from a great speech given by Margaret Thatcher in a speech to the Royal Society in 1988:

For generations, we have assumed that the efforts of mankind would leave the fundamental equilibrium of the world's systems and atmosphere stable. But it is possible that with all these enormous changes (population, agricultural, use of fossil fuels) concentrated into such a short period of time, we have unwittingly begun a massive experiment with the system of this planet itself.

Recently three changes in atmospheric chemistry have become familiar subjects of concern. The first is the increase in the greenhouse gases—carbon dioxide, methane, and chlorofluorocarbons—which has led some[fo 4] to fear that we are creating a global heat trap which could lead to climatic instability. We are told that a warming effect of 1°C per decade would greatly exceed the capacity of our natural habitat to cope. Such warming could cause accelerated melting of glacial ice and a consequent increase in the sea level of several feet over the next century. This was brought home to me at the Commonwealth Conference in Vancouver last year when the President of the Maldive Islands reminded us that the highest part of the Maldives is only six feet above sea level. The population is 177,000. It is noteworthy that the five warmest years in a century of records have all been in the 1980s—though we may not have seen much evidence in Britain!

The second matter under discussion is the discovery by the British Antarctic Survey of a large hole in the ozone layer which protects life from ultra-violet radiation. We don't know the full implications of the ozone hole nor how it may interact with the greenhouse effect. Nevertheless it was common sense to support a worldwide agreement in Montreal last year to halve world consumption of chlorofluorocarbons by the end of the century. As the sole measure to limit ozone depletion, this may be insufficient but it is a start in reducing the pace of change while we continue the detailed study of the problem on which our (the British) Stratospheric Ozone Review Group is about to report.

The third matter is acid deposition which has affected soils, lakes and trees downwind from industrial centres. Extensive action is being taken to cut down emission of sulphur and nitrogen oxides from power stations at great but necessary expense.

In studying the system of the earth and its atmosphere we have no laboratory in which to carry out controlled experiments. We have to rely on observations of natural systems. We need to identify particular areas of research which will help to establish cause and effect. We need to consider in more detail the likely effects of change within precise timescales. And to consider the wider implications for policy—for energy production, for fuel efficiency, for reforestation. This is no small task, for the annual increase in atmospheric carbon dioxide alone is of the order of three billion tonnes. And half the carbon emitted since the Industrial Revolution remains in the atmosphere. We have an extensive research programme at our meteorological office and we provide one of the world's four centres for the study of climatic change. We must ensure that what we do is founded on good science to establish cause and effect.

In the past when we have identified forms of pollution, we have shown our capacity to act effectively. The great London Smogs are now only a nightmare of the past. We have cut airborne lead by 50 per cent. We are spending £4 billion on cleansing the Mersey Basin alone; and the Thames now has the cleanest metropolitan estuary in the world. Even though this kind of action may cost a lot, I believe it to be money well and necessarily spent because the health of the economy and the health of our environment are totally dependent upon each other.


See what I mean? That's just the kind of crazy talk that I'd expect from a loony liberal like Margaret Thatcher!

It all goes to show that the left vs. right discussion on global warming is fundamentally flawed in nature, because physical reality is inarguable. There is no discussion or dispute within science itself whatsoever.

The conflict over global warming and global warming deniers isn't one between left and right. But rather, between science and anti-science.
Posted by Julian Perez at 5:03 AM