Avatar: you loved the movie, now read the books! 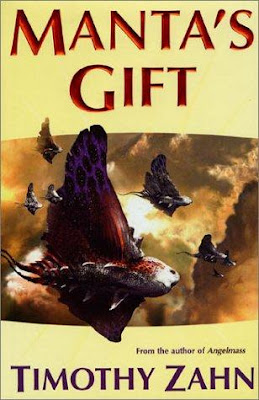 In a world of people that make movies as products without passion, it's great to see someone like James Cameron. With Titanic and the Abyss, it was obvious he had a lot of enthusiasm for the ocean, marine biology, and for history. With Avatar, he showed a real and profound love for science fiction to the point where it is actually able to trace the geneology of some of his ideas.
MANTA'S GIFT. Timothy Zahn.
"Manta's Gift" is the story of a quadriplegic that is placed into the body of a flying manta-ray like creature that lives in the dense atmosphere of Jupiter, with the secret mission of observing them and reporting their technical secrets.
Manta's Gift has various elements in common with Avatar: a quadriplegic given a second chance by the opportunity to become an alien, an earth company that wants a spy to get something they want from extraterrestrials, an emphasis on creating a well-developed and thought through ecology and biology as opposed to an emphasis on physics and new gadgetry. It's really hard to talk about Manta's Gift in a spoiler-free way, but like Avatar, it deals with a problem of conscience.
What's interesting and extraordinary about "Manta's Gift" are not the similarities to Avatar, but the differences: the quadriplegic hero was actually placed into a body in the womb and so he "grows up" in this race and later learns of his connection to earth.
Leigh Brackett's Mars Stories
Brackett's stories are like a reverse War of the Worlds: humans go and conquer Mars. They're stories about the colonial experience and the resentment of have-nots for haves, the resentment of ancient traditional societies for new arrivals and corporations and vice-versa. There's a lot of influence in Brackett of Clark Ashton Smith and the Weird Tales writers, in the sense that her Mars is atmospheric, dead, and eerie. For instance, Brackett's Mars has a winged race, a staple of adventure science fiction, but instead of awe-inspiring they're creatures of terror: batlike night-shadows that live in a crumbling city.
As much as the premise of Leigh Brackett's Mars stories sound like Avatar (mining companies against native people) the differences are even more interesting. For one, while, Brackett's Martians look human in the time-honored Burroughs tradition, her Martians are too weird to possibly be jack-off fodder for nerds the way Zoe Saldana's character was. Heroines of the stories tend to be gutsy earth-women. And it should be said, Brackett's females were very interesting, more like tough two-fisted girl spies that can shoot a gun if called for. 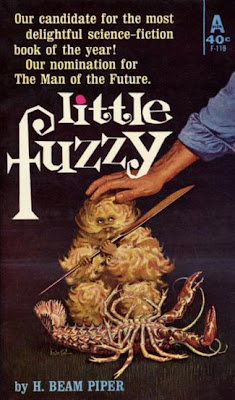 H. Beam Piper's "Little Fuzzy"
"Little Fuzzy" has many of the themes of Avatar: a scientist trying to protect the dignity of an alien race against a company that wants to exploit the resources of a world and deny the humanlike status of the primitive natives. Because whether the Fuzzies are sentient or not is a real question that has to be successfully argued and communication isn't possible, the hero has to prove their rights as beings...a common science fiction theme going back to Isaac Asimov. At some level, science fiction is about affirming the dignity of beings different from ourselves. The applicability to the real world speaks for itself, and it's something that always made me argue that SF is a forward-thinking genre.
It's actually pretty shocking that, considering the paucity of the public domain, that something written in the 1960s would already be expired, but "Little Fuzzy" is available entirely online. Though the reason is actually quite hideous: HBP committed suicide in the 1960s (supposedly to screw his ex-wife out of his life insurance by voiding it) and so his copywrights were allowed to lapse.
Posted by Julian Perez at 6:25 AM