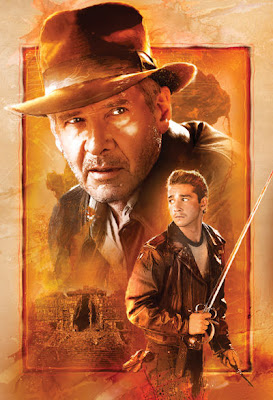 Here it is, my long-overdue review of INDIANA JONES AND THE KINGDOM OF THE CRYSTAL SKULL.

In short, I had a great time. It's a worthy addition that maintains the quality of the previous films. My anxiety about the return to Indiana Jones after all this time is dispelled, and I remembered why I liked this stuff in the first place.

The Crystal Skull, and its bizarre unearthly properties, has the same sense of fear and otherworldliness that the Ark of the Covenant had (and the Grail didn't have). 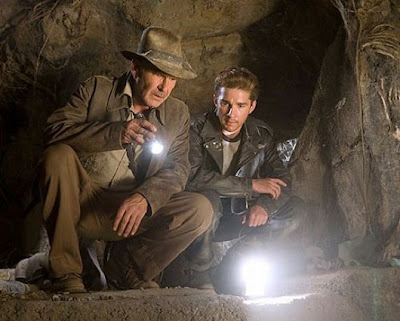 Harrison Ford has a fantastic charm. He's still got it: he makes a look or smiles at the right time to make a line a lot better than it ought to be. Roger Ebert said that Ford "doesn't get older, he just frowns more." After 20 years, the character is still recognizable: he's still got the hat and whip.

Indiana Jones reminds me of Doc Savage: a character that started in the 1930s, transitioned to the War Years and fought the Hun, and then finally battled the Communists in Cold War, paranoia-filled tales. Some of Doc Savage's last adventures remind me of CRYSTAL SKULL, with Doc fighting the age-specific bugaboos of the time. One in particular featured Doc discovering the secrets of "Foo Fighters" (the pre-1950s name for Flying Saucers).

In that respect, they picked the single most obvious Indiana Jones story to do, except maybe "Indy finds Atlantis." Who ever tried to read von Daniken's CHARIOTS OF THE GODS? and thought, "hey, Indy should do something with this?" As a UFO and Ancient Astronaut obsessed kid that read von Daniken and THE TWELFTH PLANET and watched IN SEARCH OF... regularly, I even urged my Dad during a family trip to see the actual Crystal Skull discovered in the 1930s: how it was made is one of the great brain teasers of archeology.

For what its worth, I think the transition was successful: the paranormal elements had the same sense of fear and atmosphere that the supernatural elements of the previous stories did. There was one sequence in particular that was absolutely brilliant: Indiana Jones, fleeing from the KGB, ran and hid in a makeshift town about to be used as an atomic bomb test site. What I thought was interesting about this was, in a flash we realized that the Indy that bested the Nazis was no match for the atomic age.

Shia LeBouf was a very worthy sidekick, a great Dick Grayson to Indy's Batman. He gave us some of the more humorous moments of the movie, which was packed with humorous moments. The KGB and Blanchette are about to gun him down. His last words? "I like Ike." 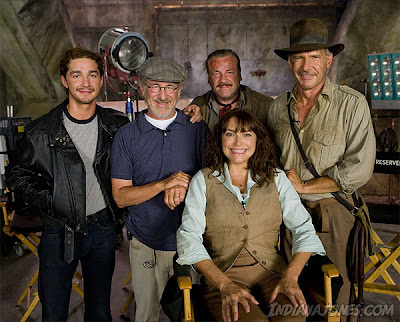 Spielberg is my favorite action director (with the possible exception of the CITY OF LOST CHILDREN guy). He is still every bit the auteur film school nerd in love with Igmar Bergman that he was back in the day. 30 years in Hollywood haven't stifled his ability to show us something totally different. Spielberg shoots action better than any director I know: by actually moving the camera. By using what the camera shows and doesn't show in interesting ways. At no point during the film did I say, "gee, I've seen this before in a billion other action pictures."

Of all the INDIANA JONES movies, this is the one that brings it all together, and so it leads me to believe this may be the last one. The Ark of the Covenant shows up (like Shaft, the Ark has theme music that follows it around everywhere), as does Marian Ravenwood and the Citizen Kane warehouse. Likewise, there are references to the YOUNG INDIANA JONES series: they mention the episode where Indy was captive of Pancho Villa. And it seems Indy is now living in his Father's house from LAST CRUSADE, where we learn the loveable old coot kicked the bucket.

The Indiana Jones novels aren't directly referenced, but a big part of the story was Indiana Jones's background in espionage...something that was a major feature of the novels, but never mentioned in the movies until now. Likewise, Indiana Jones functions in this story like Doc Savage, a chief to a team of sidekicks, which was how he worked in the novels but less so in the actual movies, or even the comics. 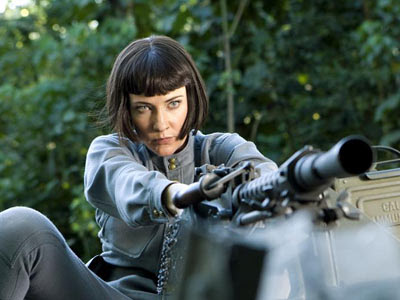 And Cate Blanchette has a fantastic menace. She gives one monologue that is downright chilling, about the future of mind wars. It's strange, I can't think of Irina Spalkov without thinking about my Mother. Maybe it's because Mom's name is also "Irina." My grandparents were Estonian, but like my Father's family, they were antifascist pro-Communist true believers, and big time Russophiles, big enough to give Mama a Russian name (though they came to regret it and become disillusioned).

How's this for a late comment? It's 2011 and I finally got around to seeing this movie. All I can say is thank god I got it for free from the local libary, and I'm impressed that you managed to keep your tongue so firmly in your cheek through this entire entry, since obviously a fellow of your taste and exacting standards can't have *really* enjoyed this debacle.

I felt bad for Harrison Ford, once such a proud, "no guff" guy, reduced to uttering dialog like "The treasure was knowledge. Knowledge was their treasure." Of course the irony is that for all of us who wondered for 20 years what a fourth Indy movie would be like, it is was in fact ignorance that was the true treasure, and now we've lost it.

Lousy writing, annoying sidekicks (you tipped me off you were kidding when you praised Mutt) and iffy stunt work (!!) aside, the thing that ruins this movie is the near-total reliance on CGI, even for scenes where people are standing around talking (the "lost city" I can see, but do you need to fake New Mexico!?!?!). Interestingly, this sort of thing actually makes a film look smaller and cheaper, though I know it cost a fortune to create.

I think Spielberg's lost it anyway, but the worst stuff bears the seal of George Lucas. Every time we saw a double-taking prarie dog or a howler monkey, my wife said, "there's Lucas' conttirbution." Once again he's crafted a film that's not only crap in and of itself, but also manages to retroactively ruin the fun of what went before. Never has a man made more money by giving his fans the finger. The only part I liked was at the end when Indy said, "Somewhere your grandfather is laughing." I've no doubt Connery was doing just that. Finally there's a crap movie he could have been in, but wasn't.