Seven of Nine is responsible for Obama! 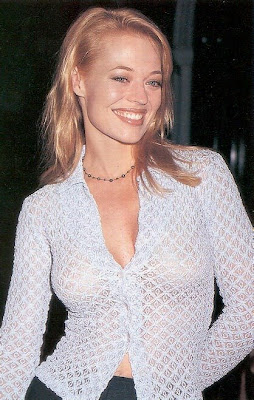 I was just thinking about this the other day: professional superbabe Jeri Ryan is responsible for the candidacy of my good buddy Barry.

Jeri Ryan filed divorce papers from her husband, Senator Jack Ryan. Part of the reasons she gave for wanting a divorce was how creeped out she was that her hubby dragged her to a swinger's club, where according to her divorce papers, Jack Ryan wanted her to have sex with him in public, and the place had plenty of whips and torture devices along the wall. During the campaign, the divorce papers came to light, causing the incumbent Senator to drop out.

It should be remembered that Jeri's husband's re-election was, basically, a sure thing. He was a well-liked incumbent, and he was running against some nobody named Barack Obama.

Who did the GOP decide to run instead? The craziest man in America, ALAN "AWESOME" KEYES, that's who! The guy that was in the GOP primary something like five times without winning a single state. Alan "No Chance" Keyes.

Barry Obama is nothing short of the luckiest man in world history. Running against Alan Keyes is like being GIVEN a Senate seat.

Here's something else that's interesting: Republicans in general have to answer to a base of religious, family-values types. Sex scandals alienate this base, and finish GOP candidates, which is not often true for Democrats. If Bill Clinton had been a Republican, Monica Lewinsky would have finished him.

Maybe that's no longer true, though. After all the gay sex scandals (Foley, Craig, et. al.) last year when the College Young Republican chief that seduced several students, you could hear a sigh of relief from Republicans everywhere. "A straight sex scandal? Oh, thank God!"
Posted by Julian Perez at 6:14 AM