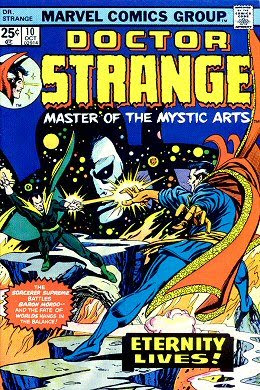 One of the best characteristics of good adventure comics and good comics writers, the most literate and intelligent (Englehart, Gerber, et. al.) is their ability to use their comics to have a discussion, to interact with the forces around them. If the nation is in malaise from Watergate, the comics should reflect that. If Christian fundamentalism has become a frighteningly powerful force in our culture, the comics should show that, too.

One of Stan Lee's greatest realizations was how Marvel Comics reacted to the antiestablishment, antiheroic strains of Modernism, just as much as Arthur Penn and Frances Coppola would take Truffeaut and Goddard, and from inside the studio system, start the American New Hollywood Cinema.

This characteristic, of responding to the greater world, is (mostly) lost now because of how comics writers have come to look at superhero and adventure books as being nostalgia-oriented. They view it as inherently for children (instead of for older children, intelligent children, teens, adults, and intelligent adults) and as a consequence write books with a lot less sophistication and credit to the reader. These writers also view comics as unable to have a dialogue with the bigger world, so they write comics about comics. I'm talking about writers like Mark Waid, Grant Morrison, Jeph Loeb, and (at least post-1990) Alan Moore.

All this may sound a little weird when we're talking about fun, escapist adventure books. I'm not so sure, though. One of the interesting paradoxes about escapism is, the best kinds of escapism are based on experiencing emotions that we wouldn't ordinarily like to feel, but we enjoy in a story. 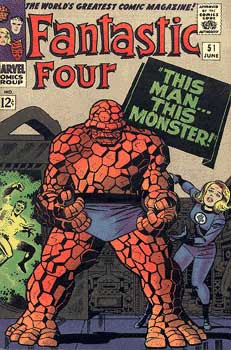 For instance, take Ben Grimm. He's an ugly monster, alone and alienated from the human race by his grotesque appearance, a character capable of great self-pity and who depends on his strength because he feels he doesn't have anything else to offer anyone.

Obviously, this isn't escapism in that, for instance, people want to BE Tarzan, because of his freedom, physical prowess, and exciting life. But it still is escapism! The defining characteristics of that most escapist of all literature, romance novels, is that at the end one of the lovers dies of cancer.

The greatest adventure comics writer of all time, Steve Englehart, realized how important it was for his work to interact with the world around him. Englehart's CAPTAIN AMERICA AND THE FALCON was about the malaise of the Nixon years, conspiracies involving corporations that usurp American democracy, and the ruthlessness of energy/oil companies. 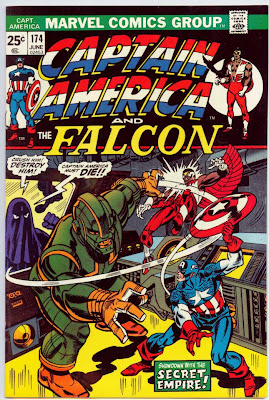 At the same time, Englehart's DOCTOR STRANGE was the first time that the good Doctor was influenced by the counterculture-spirited, British New Wave of science fiction and fantasy writers, personified in the magazine NEW WORLDS and represented by writers like Norman Spinrad and Michael Moorcock, and had an influence on writers like Roger Zelazny and Frank Herbert. Briefly put, the spirit of the British New Wave was the following:

1) The importance of Jungian symbolism, and the reality and significance of symbol becoming personified or real. This was the first science fiction for which psychology was important. This is also the first science fiction for whichthere was significance to dreams and the collective unconscious. Also, where the events of the story in the outer world were identical to what was going on in a character's inner mind. 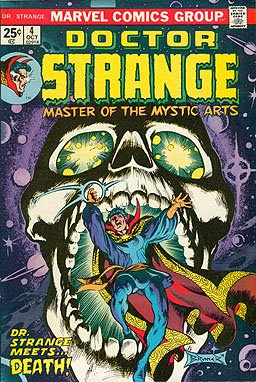 2) An emphasis on non-Western, non-scientific cosmologies and means of measuring time. The idea of the "multiverse" was new to science fiction but not to Hinduism. The idea of a spirit world where real consciousness happens, for instance. This was the first science fiction where

3) Hallucinogenic drugs as the secret of the universe, as seen in Norman Spinrad's stories about a "true" drug culture, or Moorcock's Jerry Cornelius.

5) A rejection of fascism, right-wing politics, Toryism, anti-imperialism, antiracism, and an embracing of radical politics and the counterculture.

6) A rejection of the escapist adventure story. 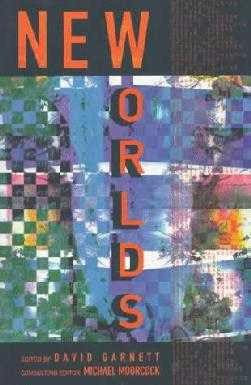 All of the above are present in Englehart's rock n' roll DOCTOR STRANGE, with the exception of #4, which couldn't be delved into because of the restrictions of the comics code. Sounds like the punchline of a joke, doesn't it? The Comics Code was at first a tragedy and then it became a farce. But apparently there are still some things that, even in the crazy 1970s (when Americans still had balls) a mainstream comic couldn't do. Englehart made up for #4 in a very, very big way with his sex-filled COYOTE, the main character of whom had a sexuality almost as oddball as Jerry Cornelius himself. 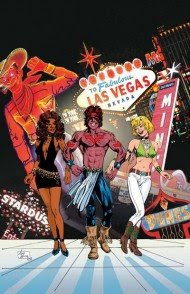 But hey, let's go down these one by one.

#1) Englehart was fascinated by representing symbolic figures. He featured Death heavily, for example, as well as Eternity. Englehart did not create either one, but the way he used them, as a journey of self-discovery and enlightenment, WAS new. In one story, Englehart has Doctor Strange go through every period of his life. Every period of his life taught him something. In other words, the external events of the story were related to the character's inner world and mental state. He could never win externally because the problem was internal. 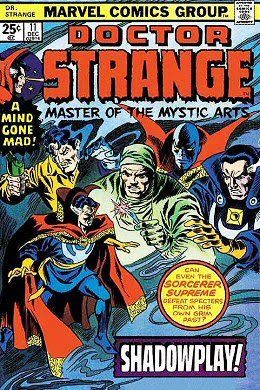 #2) Everything about Englehart's work priveledged and valorized non-Western, Indian, Shamanistic and Chinese means of thinking. This is obvious enough, but what's interesting is how Englehart applied this perspective. The best example of non-linear thinking would be in Englehart's treatment of time in the battle against Sisi-Neg.

#3) HAHAHAHAHAHA. Oh boy! The biggest not-so-secret secret of the Marvel Universe is that Doctor Strange has a lot of great shit. Why do you think the Defenders hung around the Sanctum Sanctorum all the time? Englehart had to approach this subject very carefully considering how mainstream what he was writing was, but the best example would be DOCTOR STRANGE #6, where Englehart and Clea were in Central Park and a junkie approached them. "In my time, in my studies...I have dealt with many drugs to free the body and mind..."

#5) Fascinatingly enough, DOCTOR STRANGE was Englehart's least political work, though his works made Englehart's political leanings clear, along with his distrust of hysterical patriotism and corporate power. Doctor Strange had the fascination with Eastern mysticism, rejection of materialism, and distaste for violence that the counterculture had. There are only a few hints of politics. In DOCTOR STRANGE #11 the good Doctor encountered a figure that represented repression and authority, who wore a Nixon mask. There too was the villainous Silver Dagger, an insane, fanatical witch-hunter that ironically, was a student of magic. He wasn't as memorable as Gerber's Foolkiller, to be sure, but he condemned Christian religious fundamentalism. 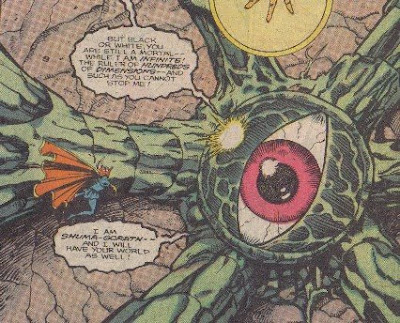 #6) Doctor Strange, under Englehart, were not stories about the exilaration of power. Doctor Strange was ineffective when applying power, because he managed to overcome obstacles by understanding and realizing their true nature. Yes, Doctor Strange was adventure, and yes it was escapist, but what's interesting is what Englehart could accomplish within the structures of traditional comics.

By the way, everything I'm talking about here goes a million for Englehart's COYOTE, which had the essence of his DOCTOR STRANGE and MARVEL PREMIERE work boiled down, but it was done in a different context...well, it's worth a post in and of itself!

Finally, it seems rather pointless at this point to point out that Englehart, like Spinrad and Moorcock, had a giant beard and did a lot of drugs in the sixties and seventies. 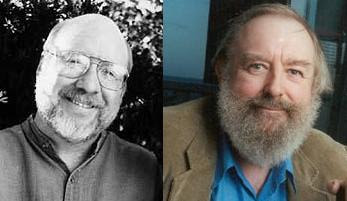