The five most annoying comic book characters ever 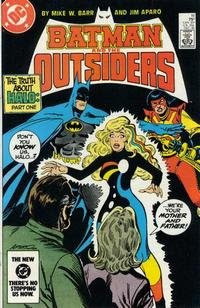 My mentor and good friend, novelist John Dufresne, once said that "no children are interesting except your own."
That about summarizes my feelings about teenagers in comics.
Halo was supposed to be "sweet and innocent," but it's funny how "innocent" and "severely mentally retarded" overlap. Maybe it's the contrast between her and the very, very adult, experienced, and competent members of the Outsiders: Batman, Geo-Force, Metamorpho, Black Lightning and Katana. Halo feels like the annoying kid that interrupts the grownups when they're talking to say something stupid.
The worst part about Halo is how everyone on the team, even frosty-hearted Batman, just loves her unconditionally, despite the fact her (ahem) "cute" antics are a good argument for infanticide. Despite the fact her "endearing" bonehead maneuvers have on many occasions nearly gotten everyone killed. That's what makes "Mary Sue" characters of this type so unbearable. The louder the writer tells us how SUPERWONDERFUL a character is, the more aggrivating they become. 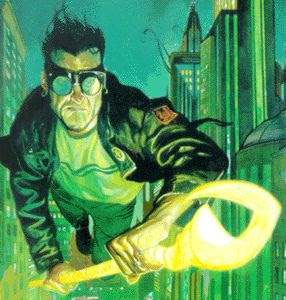 Never have I encountered a character so utterly worthy of a punch to the face. For the love of God, just LOOK AT HIM.
Starman reminds me of the movie JUNO, only removed of the humanity and unique situations that make JUNO such a great film, and all you're left with are lines like "That's one diddle that can't be undid, home skillet." The shallow attempts to be hip and ironic and intelligent, that fail because of how utterly forced it all is.
James Robinson is the guy you get when you can't get Grant Morrison. And at least once in a blue moon, not very often...Morrison occasionally makes me laugh.
Also: get a costume, you punk! (shakes fist)
Thank goodness for Geoff Johns, who realized how irritating Jack Knight was, and quickly shelved him away in JUSTICE SOCIETY OF AMERICA in favor of more interesting characters. 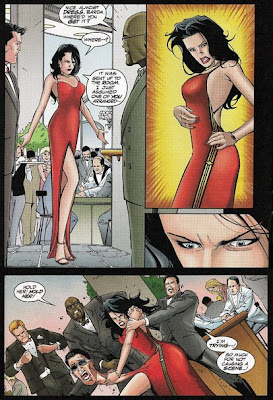 This choice just speaks for itself, doesn't it?
Plastic Man, in the pages of JLA, is a character type called the "comic relief." In movies like THE GOONIES or ANIMAL HOUSE, the comic relief is the funny fat guy. But historically, in Children's cartoons, the comic relief are characters that we hate more than anyone else.
Plastic Man was never funny. Ever. His spastic, flailing, desperate attempts to get a laugh were never as funny as Batman was, accidentally.

2. Every Single Kid Sidekick Ever 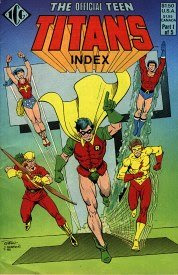 #2 is an unprecedented 30-way tie between every irritating, useless kid sidekick (in other words, every kid sidekick). This includes every single original member of the original five Teen Titans, the Martian Manhunter's buddy Zoot,
The whole institution of the kid sidekick is one the least intelligent ideas ever. Wouldn't a hero be charged with reckless endangerment? And more importantly, what person would be insane enough to go into battle with a ten year old in buttercup yellow tights? What if something happens to the little scamp? Superheroes don't exactly live uneventful lives, after all. If the poor kid got shot or mashed into goo by a giant robot, it's the hero's responsibility and fault.
There's no justification for a kid sidekick, even in an ironic sense. There could be no justification for a kid sidekick. The sheer insanity of it automatically skews a comic young, when superhero books should be for older kids and something of a challenge. It's an automatic sign the writers aren't taking this book seriously.
Sidekicks aren't even necessary, either. What, Batman can't solve a mystery without Robin? The Flash can't run fast without Kid Flash? Captain America can't punch Hitler in the face without Bucky to tie his shoes? Because the sidekick can't be as competent as the hero, they can't contribute in any way to the solution of the problem. They hold the story back. 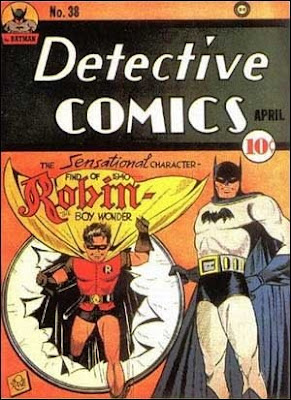 The very existence of sidekicks eliminates any attempt at verisimilitude, but it doesn't hurt that sidekicks are almost always annoying and detrimental. Robin is officially the shark-jump point for Golden Age Batman. Robin's introduction was an indignity it took even Batman decades to recover from, and get back his cool, dark, pulpy mojo.
Doc Savage had the right of it: sidekicks only work when sidekicks are adults that can consent to risks.
Finally, sidekicks fail at what they set out to do. All of them are austensibly created to be audience identification and wish-fulfillment for kids. But don't kids usually wish they were the hero? To quote the author of THE COMICS HEROES: "As a boy, how I hated Robin. He had the body of a weightlifter, and was clearly the best runner, the best ball player on the block. Imagine my delight to learn years later that he was a fag." 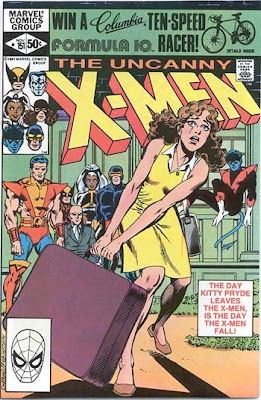 Imagine this: you're John Byrne, Terry Austin, and Chris Claremont. You just finished "Dark Pheonix Saga." To your great surprise, word of mouth from it got around, so you have on your hands the best-selling superhero comic of the entire 20th Century, the first true "fan" comic book.
So, what do you do now?
The answer should be obvious: make every single story centered around some teenaged girl!
I am in no way exaggerating. For years after Dark Pheonix, every issue was about her. Every issue she took center stage.
Kitty Pryde, you officially killed the X-Men forever. During your ascendancy on the book, X-Men went from being a cool, fan comic where anything could happen, the 1970s-1980s version of THUNDERBOLTS, to being the most hidebound and boring comic ever. You made this happen, and X-Men has never entirely got its dignity back.
There are so many interesting characters in the X-Men. So many! Every single character got something to do, yet when Kitty Pryde started to take center stage in the comics, almost all of them were shoved the backburner, in some cases forever. For instance, right after Dark Pheonix, Banshee discovered he was a father. When X-Men became the "Kitty Pride Show," we never went back to that story. Ever!
Then you have Wolverine. Right after Dark Pheonix in UNCANNY X-MEN #, Wolverine had a fascinating moment, where he was given a fascinating conflict. Wolverine wondered if he was human or an animal, if he was too savage and wild and a killer to possibly interact with the human race, if perhaps he'd be better off running away and hiding in the wilderness away from everyone he loves.
See, isn't that interesting? That would potentially have been a story as memorable and on the level of the Vision/Scarlet Witch love story, where Wolverine grows and changes and his humanity is affirmed.
It wasn't all Kitty Pryde's fault for pushing Wolverine's story to the backburner, naturally. Wolverine's own popularity meant he was becoming a face on beach towels and action figures. But the fact there was so little room for the other characters to grow because Kitty Pryde had to be center stage certainly didn't help.
As a result of this, we get modern Wolverine: a cartoon character that, like Superman and Batman, won't ever meaningfully develop in any way. 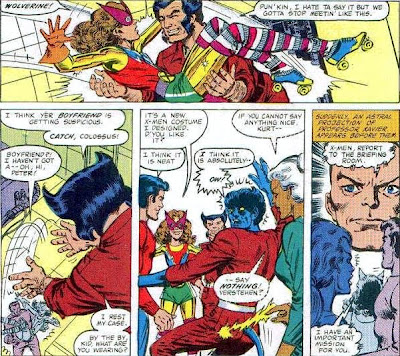 It's also worth mentioning that Kitty Pryde had a negative influence on many other comics, so her evil influence seeped out from X-Men: Halo for instance, shows a definite Kitty Pryde influence as a kid incongruously and inappropriately present on a team of mature adults.

Finally, Kitty Pryde is not hot. Not. At. All. In fact, she pretty much put the ugh in ugly.

...well, that's about it. There are a lot more DC characters than Marvel and that can't be a coincidence. In the past, DC attracted weirdo perverts that slip boys in tights, and in the present day with asshole "ironic" hipsters that think they're funny.
Worthy of honorable mentions: any character written by Keith Giffen, and Gravity.
Posted by Julian Perez at 1:28 AM

Notice how Jack Knight hasn't appeared since his comic ended and his weapon is being used by the much more interesting Star Girl. (Although I wish Geoff would have her grow up a bit and lose those DAMM braces.)

Surprisingly, I agree with most of your choices.

However, it should be understood that the "Plastic Man" in JLA, or indeed any post-50s comic, is not the real Plastic Man. You're right that Plas was "never funny," because he was never supposed to be. Any attempts to make him the comic relief in a room full of "straights" is misguided and doomed.

As for kid sidekicks, the addition of Robin put Batman on the map, sent sales through the roof and probably account for Batman's survival when so many other "mystery men" disappeared with the post-War superhero implosion. I know you prefer the "dark knight" type Batman, but without Robin you'd never have met Batman outside of a mention in "All in Color for A Dime" or Steranko's Histories.

And yes, Kitty Pryde is the worst character in the history of ever. Next to her, Wesley Crusher looks like a good idea. Losing Byrne was a huge blow to me as an 80s X-fan, but it was Kitty (well her and that interminable "Aliens" plotline) that got me to quit the book and never look back.