Things about the X-Men people forget 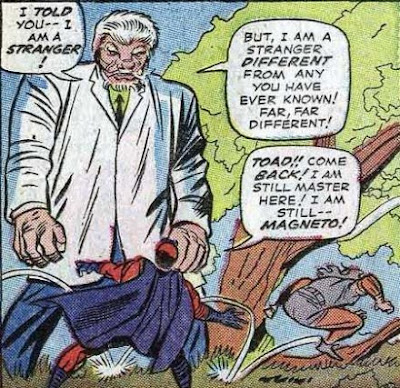 Toad had access to the power and technology of the Stranger

The Toad and Magneto were captured by the powerful, superadvanced cosmic being known as the Stranger. The Toad was left behind in the Stranger’s captivity coldly by Magneto when Mags escaped. There the Toad remained, studying the Stranger’s technology. In Avengers #137, the Toad was actually able to use the Stranger’s science well enough to impersonate him and pretty much whoop on the entire Avengers, including powerhouses like Thor and Iron Man. 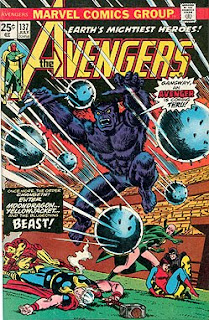 Consider the implications of that story. The Toad studied for long, long periods of time the science and technology of an advanced being that is either on par with the Watchers or at the very least the Overmind. The Toad was always an underrated genius with a surprising intellect for someone so underconfident and sycophantic, which is an interesting idea in and of itself...but mastery and use of the Stranger’s technology puts him in a very scary category of Marvel Universe high-level tech users. And who’s to say Toad doesn’t have a Stranger gadget or two stowed away? Even if Toad barely understood what he was working with (which Avengers 137 seemed to contradict - every indication was the Toad knew what he was doing and working with), the slightest application of the Stranger’s science can result in superweapons that can put Toad in one of the top tiers of X-Menaces...or at the absolute least, make him a believable villain. 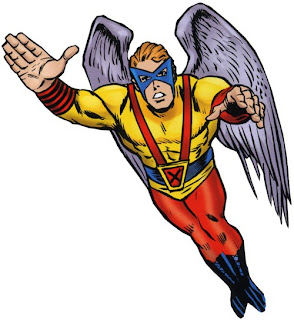 To the best of my knowledge, no one has mentioned this since the J.M. de Matteis “New Defenders,” but Warren Worthington III was the only one of the X-Men that had an adventuring career and costumed identity prior to joining the original group as the Avenging Angel. We get this element of his origin in Uncanny X-Men #54, where not only did he have a career as a hero, he also fought crime on his own, acquired some moderate fame independently, and even had a classic superheroic secret identity. Back when the Angel left the X-Men and joined the Defenders, he was much more comfortable without the X-Men and in a superheroic occupation because they said he’d gone it alone before. Heck, the Avenging Angel costume is so important it became Warren’s regular outfit when the X-Men acquired real costumes as opposed to training uniforms.
The Avenging Angel period can’t help but arouse curiosity and we only saw the barest hint of it. What villains did he fight? What adventures did he have?

Rogue started off as a supervillain 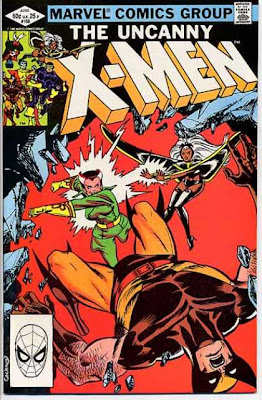 I can see why writers just let this one drop. After all, doesn’t that poor kid have enough angst and problems in her life, they have to add one more source of internal drama? What with her cruel total inability to have anything like intimacy and the way her powers provoke an identity crisis, and her ultimately heartbreaking attraction to men that are all wrong for her like Magneto and Gambit. 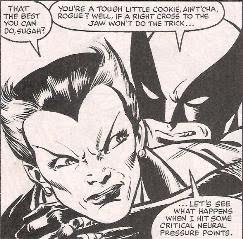 But lest we forget, Rogue was not only a supervillain, she was the nastiest, cruelest member of Mystique’s Brotherhood of Evil Mutants, which was the nastiest, cruelest incarnation of the Brotherhood ever. Just check out Uncanny X-Men 158.
In that story, Rogue shot to kill and was capable of murder. She delighted in mayhem. Rogue was, in short, not a crook that was just in it for the cash or because they were framed or tricked, the way Hawkeye, Quicksilver and the Scarlet Witch were.
Rogue was scum that could melt acid, but redemption came when she realized she was losing her mind, going mad, and forgetting who she really was and couldn’t control her power. When she showed up at the X-Mansion wanting help, she was so pathetic and humbled that it was possible to forgive her past cruelty out of sheer pity. This is surprising, because her draining Carol Danvers’s powers and memories (to the point Carol couldn’t recognize her own father) was such a nasty crime that, like the murder of Gwen Stacy by the Green Goblin, it would be very, very easy to consider Rogue totally unredeemable afterward. 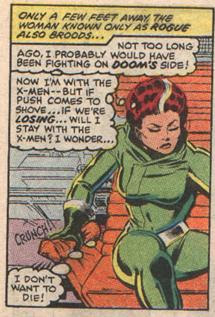 To be fair, from Avengers Annual #10 to about Uncanny #158, Rogue was scarred by the power and identity transfer with Carol Danvers and a case can be made she wasn’t 'herself' in these stories. But that doesn’t explain how conflicted Rogue was in her early appearances in X-Men and in Secret Wars, where she was totally uncomfortable being a superhero in light of her past, a person with divided loyalties that could jump ship and turn bad again if the occasion presented itself or the going just got too rough. There was even an intriguing but dark possibility she might become a villain again if it meant being on the winning side in the Secret Wars.
To the best of my knowledge, this inner conflict fell away as Rogue felt more and more like an X-Man, which is to be expected, but it's surprising how few people have brought up that Rogue started off evil. Contrast that to how Hawkeye and the Black Widow’s criminal origins have been a regular part of their characters.
Come to think of it, this whole list could actually be made up of things about Rogue writers forget. One of Ms. Marvel’s powers they just ignored and allowed to disappear was Carol Danvers’ Spider-Man like “Seventh Sense,” although there was one occasion it was stated in dialogue that Rogue lost the Seventh Sense at some point. This makes sense. Considering Rogue’s genetic instability, it would be logical if the power transfer from Danvers was far from perfect.
Alright, so they explained that one…but if Rogue has Ms. Marvel’s powers and physiology, she therefore has Carol’s Humanikree genetics. Did you get that? Rogue is part-Kree.
Posted by Julian Perez at 5:14 AM

Rogue's criminal past has been dealt with in recent times.

There was a story which featured a retconned assosciate of Rogue and Mystique's named Blindside.

Also, Rogue's past is mentioned by Steve Rogers in his writings in the Heroic Age files books

Wait, this wouldn't happen to be the same Blindside that became a Brood, did it? During the second unbelievably long X-Men alien arc that took place where they were in Australia?

Because considering she turned into a space monster I find that darkly hilarious.

What is it with X-Men where, every five or six years the comic grinds to a halt with an alien/space story arc that just seems to go on forever?

Actually I made a boo-boo. Her name is BlindSPOT, not Blindside. However, to answer your question, she's alive and well and waiting for some Marvel writer to use her again.

In response to your Angel comments, it would be interesting to find out more about his solo time pre-X-Men. Given the timeframe, it wouldnt surprise me if he fought at least one or two minor villians from the begining of the Modern Marvel Age.

Not to nitpick,but isn't *every* stranger "different from any you have ever known"? Hence the label.

the Stranger is a Marvel cosmic villian, its in their nature to make speeches like that.

No kidding. In Marvel comics, even meter readers talk like that!

I'm glad you showed up for this one, Dave. We've had conversations before about your statements about how in your view, Silver Age Superman is all about redemption.

I on the other hand, never agreed with you, because no important villain of consequence ever turned good or stayed good.

Because that never happened, I question the sincerity of that entire theme. If redemption was important to the Weisenger guys, they obviously didn't mean it or weren't committed enough to it to pull the trigger and have it go somewhere.

I mean, shoot...if someone like Rogue could be redeemed, anyone can. I suspect Claremont did it as an experiment to see if the audience would accept the redemption of such an unsympathetic character.

After all, it's easy to make someone cool like Deathstroke the Terminator a good guy. He was a mercenary, fought according to his code, and driven by things like a sense of duty. He was no angel, but he was no sociopath either, and he had a lot of charisma.

No, a stranger is merely someone you haven't met. Doesn't make him different from anyone you've ever met.

Who is to blame for Avenging Angel's awful costume?