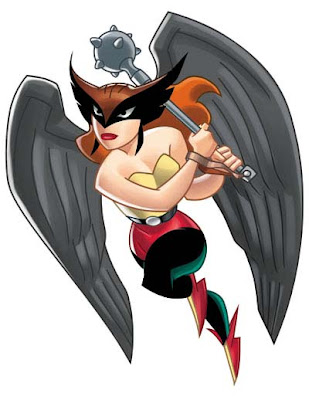 Dwayne McDuffie, a guy best known for writing for the DC Animated toons and then actually getting to write Justice League, died recently, which is an ugly shock because he was energetic, relatively young, and wasn't obese or anything. He's the kind of guy you figure can go the distance, and his death (due as I understand it, to accident) is the kind that makes you angry.
In his capacity at working at animated DC, particularly Justice League, he created some of the slickest, coolest cartoons ever made, the single best expression of DC superheroes in any medium ever. Dark, smart and old-school cool, Justice League was the first animated DC cartoon to use long-term arcs and is generally considered, along with the early seasons of Batman and Mask of the Phantasm as the high point of superhero animation.
Let me tell you the exact moment I realized Dwayne McDuffie was my kind of guy.
During the DVD of the Justice League episode 3-parter, Dwayne said he was absolutely shocked by the buzzkill, disappointing revelation that Hawkman's wings were some kind of strap on to his cosume and not actually a part of him. So, if you look closely at his Justice League show, at no point do any Thanagarians take their wings off, ever - even when by themselves...and if someone unfamiliar with DC were to, say, draw a conclusion from that...well, that wouldn't be his fault, would it? They don't say the wings are a part of them, they just heavily imply it!
This is such a clever way around outright contradicting canon that I have to give him props for sheer sneakiness.
Also, note that Nth Metal is onl mentioned as an engineering concept totally unrelated to flight.
I thought I was the only one this drove up the wall and it's nice to know I wasn't alone. People that are totally entrenched might wonder what the big deal is, but I started off a Marvel fan, reading Marvel-only as a point of pride. Naturally I got curious about DC because I liked superheroes, and one of the first I wanted to read was Hawkman because he looked so darn cool: he had wings and fought with ancient weapons. He looked like a DC version of one of Frank Miller's Ninja heroes. 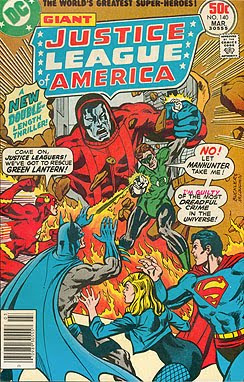 Instead, we have a character that is an alien (huh - why is that necessary?), who uses ancient weapons for no reason except an insane whim, whose motive for coming to earth and remaining there is murky at best, and worst of all, his wings aren't a part of him. This final bit removes the element of fantasy and adventure. It makes him a phony, a sham, a lie...like a pimply faced, Doritos-smelling teenager pretending to be Santa Claus at a mall. The real Hawkman is a lame character like Wonder Woman, in that he makes absolutely no sense so it's impossible to like him.
Regardless, here's another thing that Dwayne MacDuffie have in common: we're both Englehart fans.
Here's the pudding...the very first story arc after the three-part introductory movie was actually based on Englehart's dramatic splash story in JLA 140-142 featuring the origin of the Manhunters and their attempt to steal the power of the Guardians, the inciting incident of which is framing Green Lantern for murder.
What's more, the two characters that were the best developed in the entire comics run were Hawkgirl and Jon Stewart. It was Englehart's idea to bring Hawkwoman into the JLA with the impressive logic that if Hawkman was a member, why wasn't Hawkwoman, anyway? Though it should be noted that it was Gerry Conway a few years later that had Hawkwoman as a member without her husband.
Finally, it was Englehart who established the character of Jon Stewart as a leading man. When Englehart took over Green Lantern, the expectation was he was going to bring Hal Jordan back. Which he didn't do for at least an entire year, doing to the one thing nobody expects: writing Jon Stewart as such an interesting and competent guy, when he finally got around to Hal Jordan, I didn't want Hal back.
Even one of Englehart's minor stories was adapted by the animated series, including a Batman/Aquaman team up in Legends of the DC Universe.
Thus, Dwayne MacDuffie was a guy on my wavelength. I know he will be missed, and in an era when people who just don't care or know anything about comics characters except campy water cooler jokes (ahem - Brave and the Bold) he was someone that loved the characters and took them seriously. He was a rarity and his enthusiasm will be missed.
Posted by Julian Perez at 4:38 PM

Hey, Julian this is Stephen Escudero. I am loveing the blog. I'm working on ablog reviewing mcduffie's injustice league story he did in JLA a few years back. McDuffie is amazing. Have you read his Staic X comics which are the basis for the Static Shock Cartoon. I loved the Static Shock cartoon and he put a lot of heart into that show. we got to talk about it.