RPGs made under license

RPGs produced under license have incredibly stringent rules about faithfulness to content and that can result in odd and hilarious situations where RPG writers try to passive-aggressively undercut elements of the world they don’t like. 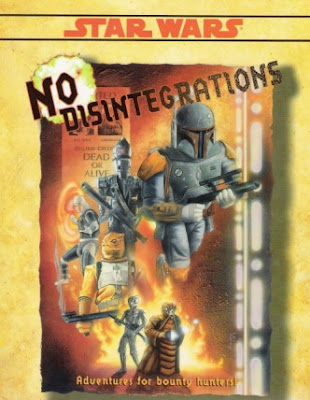 I’ve yet to see anyone in a Star Wars RPG product (or, for that matter, any other bit of Star Wars lore like novels and comics) ever mention or utilize the terminally retarded Medichlorians concept.

This is especially strange because in Star Wars RPGs, I’ve seen detailed treatments of something as throwaway as the Kessel Run used as the basis of an entire product, complete with gameboard, map and tokens, not to mention elaborate and detailed RPG treatments of Cantina-scene background races like the Hammerheads and walrus-men.

Medichlorians were explicitly described in the Phantom Menace as part of a huge exposition scene, yet much more detail and energy was spent in the roleplaying game devoted to what the monsters in Chewbacca’s holographic chess game actually are! You can’t tell me that’s not passive-aggressiveness in action. 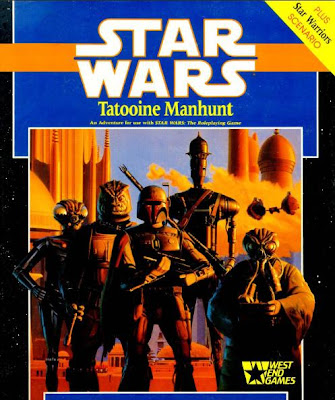 Have a look at that cover. Doesn’t it sound like the coolest thing you can do at your gaming table…have your buddies fight against the awesome, ruthless bounty hunter enemies in Star Wars, like Boba Fett, the Terminator-esque unstoppable assassin robot IG-88, and the lizard guy Bossk?

But wait! Look on the inside. 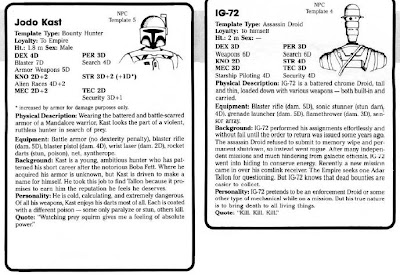 That’s right – for some reason, the module couldn’t use Boba Fett, Bossk, IG-88 or the rest. But that sure didn’t stop them from doing what the writer wanted to do! He made characters that are so identical to the iconic Star Wars baddies that to call them knockoffs would be misleading, because at least a “knockoff” would imply distance, that in some way these are different people. What happened was, most likely someone told them the characters were unavailable so they went and wrote this.

Star Wars is an interesting case because in many ways, the RPG created the entire expanded universe as we know it. You see, the RPG was the first place to consolidate information about the setting and revealed information previously unknown…so therefore RPGs were for a long time, only Star Wars “reference books.” Because the RPG materials were Lucasfilm-licensed, everything in them was first vetted and therefore totally canon! People writing the novels and comics had to read the RPG books because they were actually the most complete sources of information available on the Star Wars galaxy. 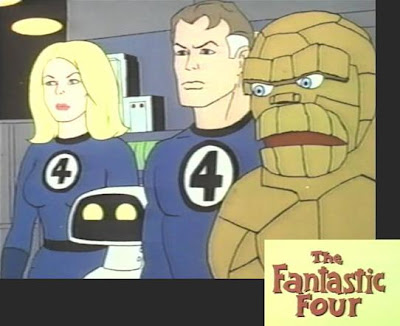 If you replace a member of the Fantastic Four, no matter how good of a character you are, people will hate you because these guys are so beloved. Remember that loathesome motherfucker HERBIE, who replaced the Human Torch in the cartoon?
That goes double for any character that replaces someone as awesome and universally liked as Ben Grimm, who is quite possibly the Morgan Freeman of the Marvel Universe: the guy everybody likes. Take the TSR Marvel Super-Heroes game module, which features the FF vs. Arcade. 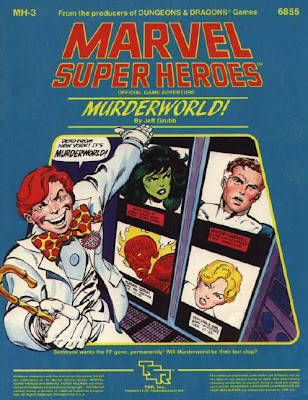 The adventure module “Murderworld!” by Jeff Grubb had to use She-Hulk because the TSR game was set in modern continuity, and someone working under license can’t pick and choose. It’s not “cafeteria canon.” But it was obvious the writer wasn’t a big Shulkie fan. For instance, Ben Grimm’s statistics were prominently given in the back “for game masters that want to use him.” Uh, okay. 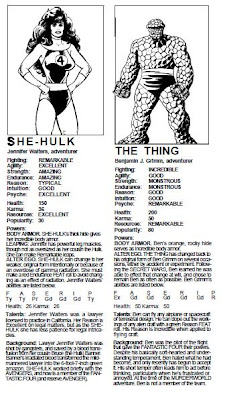 Notice his sheet is as big and prominent as She-Hulk’s despite the fact the character’s not even in the adventure module!

What’s more, when the FF arrives at the killer amusement park Murderworld, the She-Hulk’s ironic deathtrap was being on a simulator plane targeted by a gauntlet of traps and missiles and so on. The other heroes’ encounters were perfectly tailored for them in a traditional Arcade way. Placed in a plane? That’s something one would subject Ben Grimm to, since Ben used to be a pilot and war hero. 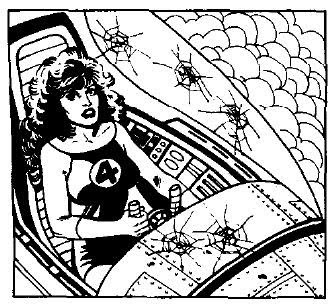 They mention briefly in the module that Arcade assumed the Thing was still in the FF. What does this mean? Two things:

1) The story as written makes no sense if used with She-Hulk but plenty of sense with Ben Grimm. Ben Grimm could fill in for Greenie and it would not require anything about the module to be changed!

2) Even in the story itself, the module writer made sure people are going, “hey, where’s the Thing?” 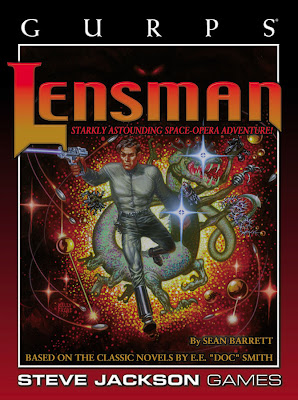 Women and the Lens

In the Lensman novels, Smith went out of his way to explain that women can’t use the Lens and have minds totally incompatible with the Lens in terms that are hilariously patronizing. There was one scene in First Lensman where it was deliberately stated that one female character went to Arisia and was outright refused to be granted status as a Lensman as she didn't have the mentality for it. This is canon, inarguable as gravity.

To say this creates a problem for gaming is an understatement. To REQUIRE a female player to play a male character against their will is pretty awful, and for the worst possible reason imaginable: because it’s impossible to enjoy being a woman in the setting that’s not a noncombatant nurse.

The Lensman RPG manual desperately tried to work around this limit in a way that could best be described as subdued panic. In fact the guy that wrote the guide once said in an interview that he was nervous about taking on the project because it would piss off his wife! The book contained a few sly, subtle hints slipped under the radar about how something like a female Lensman could be possible. One of them expressed a compromise possibility that perhaps Clarissa MacDougall needed to be the first female to use a Lens and after her, others were possible. That doesn’t make any sense, but it was something.
Posted by Julian Perez at 2:14 PM

I remember Jodo Kast. never played any of the Star Wars RPGs but I do remember he was used in other Expanded Universe materials. I think one of these was a story where Boba Fett hunted Kast down for stealing his bit.

i love the look on She-Hulk's face in the picture. I think even she realizes this death trap has nothing to do with her

Yeah, I just looked him up on Wookiepedia.

I must admit, learning about Jodo Kast's surprisingly lengthy career I feel the same mixture of amusement and embarrassment one would get on learning that the crazy uncle you visited as a kid also liked to go to transvestite prostitutes.

I don't think I'd go THAT far. But it is interesting to see that a guy who was essentially a Boba Fett clone had such a lengthy history. Just another way of showing that thanks to the EU, Star Wars has a surprisely huge history.

Makes want to be background in a Star Wars project. Then I'd get a figure and a short story written about me. If the CCG was still around then I'd also get a card.

I find this interesting: Jodo Kast, according to Wookiepedia (God, I love that title) actually originated in this very adventure. That is surprising to me, actually, because nobody really cares about the pen and paper RPG rights with the exception of Star Wars.

This is proof of what I've been saying: Star Wars's expanded universe was pretty much created by the role playing game.

i remember the first time I went on Star Tours at Disney/MGM, I saw a Star Wars RPG sourcebook in the gift shop. Imagine my surprise when I saw an entry on Dack, Luke's snowspeeder gunner from Empire Strikes Back. The guy barely did anything and here his is getting a backstory. Its like someone giving a backstory to the black guy from Top Gun.

One could assume Arcade planned his traps for the FF classic version and wasn't necessarily keeping up with Ben Grimm's comings and goings. I doubt he would've tailored a trap for Medusa in case Sue Storm quit again.