Everything you know about these figures is wrong!

There are some figures in pop culture that are no longer characters but are symbols, their names used as verbs. Here’s the problem, though: often everything we know about those characters is wrong, as the characters have been almost totally misrepresented.

The Perils of Pauline 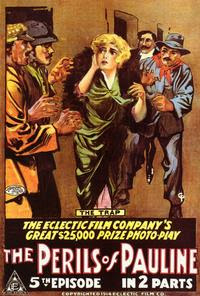 The Perception:
Pauline, according to pop culture, was a silent film heroine who was usually captured and tied to train tracks or a saw mill. She was symbolic of the virginal damsel in distress (and light bondage).
The Reality:
Here’s the thing, though: Pauline often was placed into dangerous situations, but she usually got herself out of them.
It would be crazy to say she was a feminist character or even a really strong woman, but for the time she was a little naïve but smart, scrappy and competent and typically solved her own problems. There were some occasions that she needed a rescue but these were occasional, not constanty.
Pauline was an adventurous female that wanted to be a writer, independently wealthy, and when she got married, she wanted to see the entire world from China to Paris and everywhere in between. Her evil accountant wanted to rob her blind, so he ensured she always faced some mishap.
And while we’re at it, Perils of Pauline is often described as the first of the cliffhanger serials. Only it didn’t have cliffhanger endings! Pauline experienced a problem or life-threatening in an episode and at the end typically solved it. There were no episode cliffhangers.
Incidentally, check out this serial from 1919, featuring both Pauline actress Pearl White as an antiquities thief that duels with Werner Oland as a Chinese gangster. It’s interesting in that both characters are thieves unlike other serials, and also that it features Pauline and Charlie Chan matching wits.

The Perception:
Horatio Alger was an archconservative who wrote hoary “rags to riches” stories where scrappy urchin shoe shine boys pull themselves up by their own bootstraps and become wealthy by the end. His stories are fantasies that gloss over real inequality and create a very damaging American mythology. 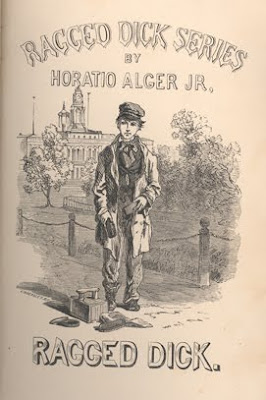 The Reality:
Horatio Alger’s most famous works like “Ragged Dick” (ha, ha) were all about shoe shine boys and other scrappy underdog kids, but they were not rags to riches stories but have realistic endings where the kids get into middle class respectability in professions like clerk or accountant. He did not write any stories where a kid became Dale Carnegie!
And far from writing stories where a character achieves their status exclusively “by their own bootstraps,” the majority of Horatio Alger stories featured a mysterious wealthy stranger who takes notice, secretly, of some good deed the hero does and works to benefit him in secret.
Let me repeat that: even in Horatio Alger novels, getting ahead is all about who you know!
Seriously, guys! Sure, I am tired of privileged nepotism beneficiaries like Bill Kristol saying poverty and lack of education aren’t real problems because anybody can be a millionaire, so it’s basically the poor’s own fault and they don’t deserve pity. But don’t use imagery of Horatio Alger, who didn’t write the kinds of stories people think he did and if he was guilty of anything, it was being formulaic and a little lazy. Michael Moore wrote a chapter in his slacker-aimed political book “Dude, Where’s My Country?” called “Horatio Alger Must Die.” This was, by the way, also where Moore published his deeply unimpressive Saudi/Bush family connections, which he honestly expected to shock everyone in Fahrenheit 9-11, but instead got a big, fat “why is this important?” from everyone.
What’s more, Horatio Alger was far from an archconservative. He was a Unitarian Minister, which means if he lived today he’d drive a VW van. His later books were often Westerns that were often banned by Church groups because of their extreme and surprising violence. And finally, it’s very likely Horatio Alger was homosexual. Yeah, I know, that’s often said about a lot of figures, but with Alger it’s better substantiated than most: he had to leave the church because of allegations of sex with teenaged boys, not to mention many friends that he confirmed his sexuality with.

Pop Culture’s Perception:
Rambo’s name is a byword for macho, testosterone fueled and brainless soldiery, and in foreign policy is often a symbol for right-wing aggression. In pop culture, Rambo is the ultimate pro-violence kill-crazy warhawk.
The Reality: 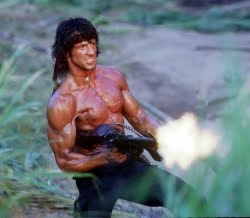 The actual character of Rambo, however, is nothing like that. In his first film, First Blood, John Rambo was a flashback-fueled veteran that went on a rampage as he was forgotten by society and unable to reintegrate into it. The final scene in the film was a vulnerable and somewhat pathetic Rambo breaking down crying about how he was a broken person that was the inevitable byproduct of war. It’s a mistake to say that the Rambo movies are anti-war, but Rambo was extremely cynical about it, even when he became a bow-wielding superman in the later films. Even in the violence-intensive later films, Rambo was still a tragic, pessimistic, doomed figure who had nothing in his life.
Rambo is the flip-side of Rocky Balboa. Whereas Rocky movies believed in America and the underdog, Rambo movies are always cynical and bleak, with Rambo as an expendable, Samurai-like, Zen figure that became war itself.
In the later films there was a lot of violence and mayhem and it’s easy to misinterpret that. Kurt Vonnegut once said that there was no such thing as an anti-war movie, because all war movies glorify war somehow. 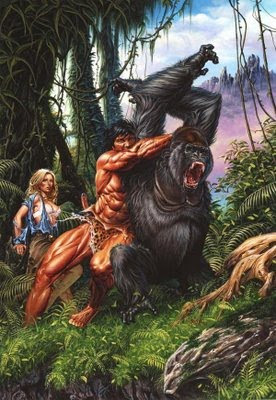 The Perception:
In the movies and television shows, Tarzan is typically a monosyllabic caveman that lives in a crummy treehouse, a wild man that’s a little on the slow side.
The Reality:
Two things about reading the original Tarzan novels take everyone by surprise: Tarzan is intelligent, and Tarzan is violent.
Tarzan taught himself to read with books left by his castaway parents when he had no spoken language, and in the book series later learned to speak perfectly a dozen languages including French and German. He could pass for a distinguished gentleman (at least on the surface, anyway), which made his savage nature all the more dichotomous and surprising when he ripped his nobleman’s clothes off to rush into the primitive. Return of Tarzan had some shocking images of a heartbroken Tarzan spending time in Paris smoking cigarettes, drinking absinthe and going to art galleries.
And for that matter, Tarzan didn’t have a treehouse. He lived with Jane in a sizable and wealthy plantation house in Africa, a compromise Tarzan was extremely unhappy with, but which he did to keep Jane happy.
Finally, Tarzan was a superwarrior of tremendous strength with a surprising bloodthirstiness that was animalistic – nature red in claw and fang. In Beasts of Tarzan, he actually killed a deer by sinking his teeth in until he drew blood. Tarzan was explosive and strong and a little scary and intense. To my knowledge, these two attributes give Tarzan his mystique and make him intriguing, but I’ve yet to see ‘em in any TV or movie version of Tarzan.
By the way, what do Tarzan and Horatio Alger have in common? Both were published in the first pulp magazine in existence. The Argosy got its start publishing Alger's serials. By the 1910s it changed its name to "All-Story Weekly" where Burroughs printed, in serial form, the Tarzan novels.
Posted by Julian Perez at 8:31 PM

It is interesting how characters can be misinterpreted.

Frabkenstien is another character that suffers from being misinterpreted. The Monster wasn't always dull-witted. I think the 90s Frankenstein wa sthe first time I've seen the Monster protrayed in recent times as something other than slow-witted brute. Deucalion from the Dean Koontz Frankestien series is also a subversion of recent Monster protrayals

If there's one thing that consistently pushes my RAGE button (and we've all got one) it's people saying "Frankenstein" when they mean the monster.

I don't know what it is, but in media adaptations everyone gets vaguely dumber. I recently listened to the Superman radio show from the 1940s, and everyone sounds and acts like they're mildly retarded.