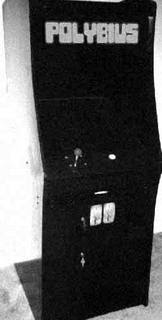 One of my all-time favorite, spookiest urban legends involves a mysterious arcade game whose existence was never substantiated, Polybius. It's a great window into the early days of video games, a horror story that developed around the anxiety people have around a new, unfamiliar technology seen as scary, youth-corrupting and addictive.
It's easy to imagine the Polybius story as a schoolyard telephone game that got bigger and bigger, a pearl that formed around the sand grain of a real life scientific phenomenon that was poorly understood at the time: some people go into epileptic fits when certain lights flash in sequence.
These days we all know about how flashing lights and intense concentration lead to epileptic seizures, but imagine how terrifying it must have been to see something like that happen in the early days of video games. You're at an arcade with a friend and in front of dozens of witnesses he foams at the mouth and collapses to the ground in a fit after constantly playing a video game.
Imagine seeing all this and not understanding why it happened.
Because the game, Polybius, if it existed at all, was put out by a manufacturer that can't be traced and no machines exist, it's very possible there's no basis for it at all. Nonetheless, the fears the game played on were very real, and the story tells us a lot about what people were afraid of at the time.
The usual versions of the urban legend goes something like this: in 1981, seven arcades in rural Portland, Oregon received a mysterious black with green joystick, undecorated arcade game named "Polybius" after the Ancient Greek founder of modern cryptography. The company that produced it was the previously unknown Sinneslöschen Publishing (a German term meaning "sensory-extinguishing").
Introducing a game in limited quantities isn't suspicious in and of itself since it was normal to test market arcade games before a wider release, and because the gaming industry was very new at the time, it wasn't uncommon for unknown publishers to get into the action either. The game itself was innovative by all accounts: most people (supposedly) remember the game being a Tempest-like tunnel-shooter. 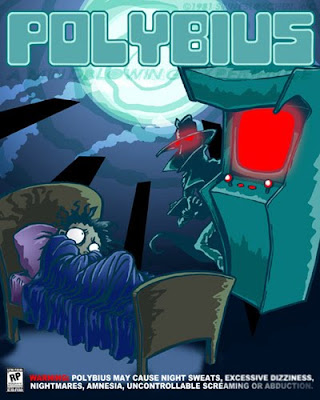 According to the urban legend, the trouble started immediately after the game arrived, those that played it suffered from feelings of dread, terrifying nightmares, night sweats, an inability to sleep due to constant screaming, and amnesia or memory loss. Different stories say that many people just stopped playing video games, and one became an anti-video game activist. One teenager first became moody and violent after playing Polybius constantly and even committed suicide.
Many people reported seeing men in black suits around the Polybius machines, not collecting quarters but removing data of some kind. A few reported the screen flashed with subliminal messages - "Obey," or "Work Eight Hours, Play Eight Hours, Sleep Eight Hours."
And mere weeks after it first appeared, Polybius machines were taken away and never heard from again. No arcade collector owns a Polybius machine, and the general consensus is that either Polybius never existed or the evidence is inconclusive about it ever existing.
What was Polybius, if it even existed? What's the truth behind the legends?
One of the more interesting theories is that Polybius might be a confused memory of the vector-graphics tube-shooter Tempest (interesting that the gameplay should be described as a lot like Tempest!), which had to be revamped because it gave vulnerable people seizures.
It is entirely possible that instead of some scheme by an X-Files agency, Polybius was just an ordinary game. According to this interview with a guy that claims to be the designer of Polybius, the game was test-released in Portland, Oregon, and as a result of a boy that got an epileptic seizure from the game, a panicky company, not used to selling something like video games that was a lightning rod for parents' groups, overreacted and pulled the plug on the Polybius's wider release and scrapped all the arcade machines that exist. The "men in black suits" were people from corporate that examined the machines for safety purposes.
Without a single working copy of the game it's difficult to take the story seriously, but nothing in it was all that outrageous or unbelievable: just a game a lot of people took time and effort to create that was the victim of a rumor mill because of a poorly understood real-world medical reaction, the litigation for which made the parent company overreact and yank all the machines out. The story of a kid who got sick from a game was passed around by a local rumor mill and became bigger and bigger, and the removal of the machines was seen as confirmation of all the scary stories.
Everything about this story, from the power the threat of litigation has on cowardly companies, to the tragic way creative people get trampled, to the lack of paranoia or conspiracy...it all has the unpleasant stink of believability. Without proof, it's all hard to believe especially with the way people try to attach themselves to a famous story like that of Polybius, but reading the interview, my bullshit detector never went off once. I sincerely hope Steven Roach's story will put an end to this over the top urban legend once and for all.
Posted by Julian Perez at 9:00 AM

Was it really that obscure a fact that flashing lights cause epileptic fits? I remember that being a plot point in "Andromeda Strain," which was a bestseller way back in 1969.

According to the urban legend, the trouble started immediately after the game arrived, those that played it suffered from feelings of dread, terrifying nightmares, night sweats, an inability to sleep due to constant screaming, and amnesia or memory loss.

I have the same reaction to "Cooking Mama."

It is surprising the X-Files never ran with this. I do remember one (good) episode where LED displays on phones, microwaves, etc flashed messages from some unknown source that compelled people to do nasty things.

Just out of curiosity, where did the "photo" come from? Just a good photoshop mock-up?

Hmmm! I just looked that up on a WebMD. Apparently, the condition is called "Photosensitive epilepsy," and apparently the first case of it as caused by video games was in 1981 on the dot.

I can't really say about the penetration of it into popular culture, but arcade games didn't have warning stickers of any kind until the 1990s. Apparently that vital space was reserved for the first President Bush reminding us that "Winners Don't Do Drugs!"

Wasn't Andromeda Strain written by an M.D., though? Michael Crichton was a doctor and he had a lot of real knowledge and expertise. That doesn't necessarily mean crazy stuff wouldn't spread at the level of the playground. Remember all the rumors that Surge killed sperm cells?

Was that X-Files episode the one where Mulder was immune because he was red-green color blind?

I have no idea where the photo came from originally. It's probably fake, although a few people analyzed it and if it is, it isn't obviously so. For instance, the "Polybius" script isn't a known font. If it was right next to WingDings that would be a dead giveaway.


There is an article appearing in an online subscription Gaming magazine called Retrocade that has an in depth article on Polybius that is very, very informative. The author obviously used painstaking research into not only the legend, its origins and key players but also uncovered a criminal element in Steven Roach, the man who claims he created the game. I was pretty surprised by what I read. I've never read anything like it before or since on Polybius and it is great. I believe this writer got it all right.