Heroes that worked for the bad guys 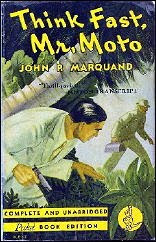 Talk about a supporting cast member that steals the show. Mr. Moto is a weird, funny looking little Asian man with bad taste in clothes and a tendency to wear golf suits. He never raises his voice or is impolite.

And he's Imperial Japan's greatest secret agent. He desperately tries to win and defeat huge swaths of territory for his masters, those friendly folks that brought us World War II and Pearl Harbor. He wants to help conquer China for Japan.
Despite his obvious affiliation with the forces of darkness (one book makes him a personal friend of Emperor Hirohito) Mr. Moto is interesting because you wouldn't expect a guy in a bad golf suit and glasses to have such a casually matter of fact, practical attitude to killing, execution and assassination. He's a supercompetent secret agent with a dozen skills, but he doesn't look it or act like it.
Once you figure out the real character of the unassuming Mr. Moto, you're always a little nervous about him because he's got his own agenda and sometimes that involves him helping you and sometimes it doesn't. If you have a conversation with Mr. Moto, he'll smile and be polite, but you'll come away thinking you just told him everything and he didn't tell you anything at all. He's patient, outwardly polite, and even tempered. He's a cryptic guy that never shows his real feelings; it's obvious "Mr. Moto" is a pseudonym; what his real name is, we just never learn. Even though he works for the baddies, it's impossible not to like a guy this cool.
By the way, it's worth pointing out for Martial Arts buffs that Mr. Moto knew and used Judo, which was given by name and its general properties accurately given (grabs, throws and joint-locks). The only earlier appearance of Asian martial arts in fiction I can think of might be Sherlock Holmes's use of Bartitsu, which barely counts because Bartitsu was created by a Brit.
Mr. Moto is obviously a take on Charlie Chan, but one who went far enough in his own direction to be interesting, in much the same way the start point for Conan the Barbarian was obviously Tarzan.
The Mr. Moto books have a great sense of humor, which is another thing to recommend them. In terms of unpredictability, there were some that a mystery buff like me can figure out all the twists well ahead of the author ("Your Turn, Mr. Moto") and others where I was genuinely surprised ("Think Fast, Mr. Moto"). 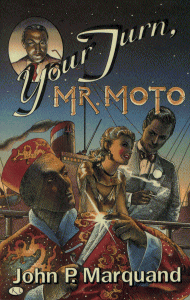 If you've read one Mr. Moto book, you've pretty much read them all. Some down on his luck American/Western main character living in the Far East bumbles his way into international espionage and must be saved by secret agent Mr. Moto. There's usually the beautiful evil spy lady, of course, a vague MacGuffin, and some (usually) evil Chinese secret agent.
The books are filled with the usual claptrap "inscrutable east" Fu Manchu stuff that macho post-pulpsters will desperately try to tell you isn't racist. The phenomenon at work here is an attraction to the most sensational elements of a culture to the point a real place becomes a cartoon version of itself. I for one would love to read at least one detective mystery set in New Orleans that doesn't somehow involve voodoo magic, for instance.
There's an argument that lots of adventure stories rely on luridness and sensationalism. That's fine, luridness and sensationalism I don't have any gripe with. The problem with things like "inscrutable east" is that it shows a real laziness of intellect. Anyone that ever threw their hands up and said we can never understand the primitive mind in jungle adventure stories is being intellectually lazy - same thing with inscrutable "who can ever figure out these Orientals" stories.
The truth is, there's a difference between the unknown and the unknowable. If you want to make a good impression on some Chinese clients, for instance, buy a book of Chinese culture, manners and etiquette. Figuring out other cultures isn't hard if you decide to take the effort.
Before Pearl Harbor, the allegiance of a huge part of the mainstream American public, not just German American Bundist types, was with the Fascists. Sure, they were efficient and Anticommunist, but never underestimate the American public's ability to sympathize with winners and hate on losers. The Chinese, though conquered and horribly exploited by the Japanese, in the Mr. Moto stories, were overwhelmingly represented by backward and lawless Warlords.
By the way, the Mr. Moto books are a perfect example of what I think is one of the most insufferable characteristics of modern libraries: the insistence on good books over popular ones. John P. Marquand was an established Pulitzer prize-winner who dabbled in mystery, espionage and thriller novels, yet despite his credentials his most famous creation was Mr. Moto. I could never find any Mr. Moto novels growing up, but all of his dense Pulitzer-winning stuff nobody read today was everywhere in every library I knew. It was enough to drive a man crazy.

It reminds me of a story about one inner city girl that wanted to find Nancy Drew stories, but they weren't available in her own library. Librarians: I understand the library profession has a special obligation to make available the great works that make up our Western culture. But if some inner city kid wants to read some Nancy Drew books, for the love of God, let her have them! 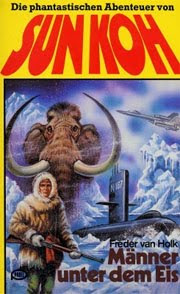 SUN KOH - The Son of Atlantis, the Man of Destiny

"Hey Jules...did you ever hear there was a pulp hero, published in Germany in the 1930s, that was like sort of a version of Doc Savage, except he was a Nazi that wanted to take over the world for Germany?"
I remember a fellow pulp-loving friend of mine told me that and I thought he was crazy because it sounded too weird to be true. But I looked into it and apparently Sun Koh actually did exist.
Even though the stories want us to think he's a noble heroic type, everything about Sun Koh is unintentionally sinister in the extreme. A Doc Savage type hero called "The Perfect Aryan" (creepy!) with blonde hair and big muscles, what sets Sun Koh as different, other than his allegiance to Nazi Germany, is that his backstory is filled with Nazi crackpot alternate history and mysticism. 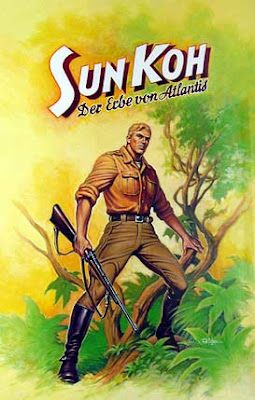 Sun Koh fell from the sky, a legendary prince of the Kingdom of Atlantis (a land filled with blonde haired whites related to modern Germanic people, naturally - it's laughably mentioned he's related to "Mayan Kings"), sent to warn our time about a coming ice age like the kind that destroyed Atlantis, a cataclysm only the Aryan race can survive and therefore he is sent to ensure its dominance over the planet. He has a tattoo on his back of hidden kingdoms and mysterious places, and a lot of his stories involve going into weird lands in India and using Indian mysticism and yogic techniques. He performed acts like removing ice from Greenland (in accordance with Nazi myths about "Ultima Thule"), going into the Hollow Earth via a hidden ancient tunnel and also bringing sunken Atlantis up from the Hollow Earth so Aryan peoples have more living space. 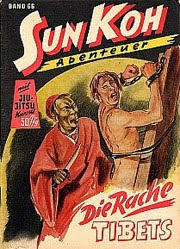 By the way, I'm pretty sure reading that previous sentence gives you schizophrenia. Sun Koh's stories are so full of discredited racist pseudohistory that if he lived today he'd spend all his time fighting vaccination and looking for Obama's birth certificate. That kind of bothers me because Doc Savage's world was interesting but purely rational.
Incidentally, I've always found it an interesting trait of German science fiction that despite how the technology got incredibly over the top, there was very little space travel at all. After all, when you've got both that AND the Hollow Earth you're just getting greedy.
Sun Koh is a shockingly casual killer. He often rips off artifacts from ancient cultures and takes them without apology. He operates according to "protagonist centered morality," in the sense that what's right and wrong is determined by the main character; opponents are bad guys because they stand against him. In one story, he actually advocated enslavement of a native people at the Hollow Earth. In short, he was an absolute monster. What's creepy about these stories is not how different he is from pulp heroes, but how similar. 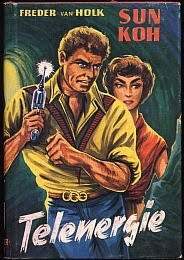 Sun Koh has a few allies: two sidekicks including a servile bellboy, as well as a big Negro prizefighter. Later on the pulp introduced Jen Mayen, a fellow inventor and mad scientist that is more his mental equal (and even got a spin-off dedicated to him and his vehicles), and Joan Martini, a sexy woman daughter of an archeologist who was thought to be a crackpot because of his belief in Atlantis and other hidden kingdoms.
By the way, the black American prizefighter sidekick died off a year after the strip started at the request of Nazi officials. The guy got a heck of a sendoff: Sun Koh gave Nimba great wealth which he used to support the Ethiopians against Italy, and he was eventually killed in battle. His last words? "Say hello to Atlantis for me." Not a bad fate for an ethnic sidekick with a lot more dignity than usual - but horrible that it had to happen at all. It's interesting to note this sidekick died the same year Jessie Owens embarrassed the Nazis at the 1936 Olympics.
Sun Koh was obviously a rip-off of the Doc Savage type technology and science hero. Both series lasted over 150 books long, and both started with him going to the Yucatan peninsula, finding a lost civilization of Mayans, and ends with our hero taking back enormous treasure that means he doesn't have to work a 9 to 5 and can just fight evil all the time. Except Doc Savage's Mayan friends gladly gave him the treasure in gratitude, whereas Sun Koh just took it.
What's exasperating about Sun Koh is that unlike Doc Savage, Conan, Tarzan and other far superior American adventure characters that fizzled out without the Gotterdammerung they deserved (damn - there's that Wagner imagery, I've got to stop reading these), Sun Koh actually got a "final story," an "ending" where he conquered the Hollow Earth and Atlantis, long since prophesized, rose from the sea. I want to never stop kicking this guy in the nuts with my all-kosher feet for this: this racist douche got something my favorite hero Tarzan never did.
Posted by Julian Perez at 8:15 AM

There is actually a guy rewritting these in English with a subvertive, anti-Nazi slant I believe.

"What's exasperating about Sun Koh is that unlike Doc Savage, Conan, Tarzan and other far superior American adventure characters that fizzled out without the Gotterdammerung they deserved (damn - there's that Wagner imagery, I've got to stop reading these), Sun Koh actually got a "final story," an "ending" where he conquered the Hollow Earth and Atlantis, long since prophesized, rose from the sea."

Nice, the author actually answered the wishes of his readers!
The fuck couldn´t the authors of Tarzan or Conan do the same?