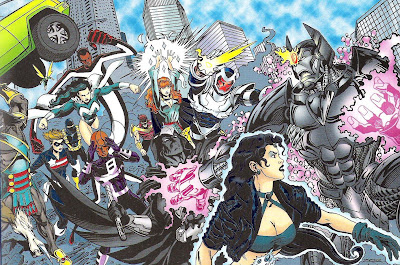 Do you like magic?
Well, apparently, so do Steven S. Long and Darren Watts, the people that brought the Champions Universe into the 21st Century.
Magic is (seriously!) responsible for all superpowers, even mutants and accidental origin types (say what?).
Atlantis is full of magic, and so are the Champions Universe's Mole Men equivalent race, who also use magic. The main martial artist NPC uses magic swords (possibly +3 Shocking Burst Vorpal, but let me check the DMG tables again). The other dimensions are filled with magic and the book even points out only mages are suited for interdimensional travel – which is weird because the most famous other dimensions in "real" comics are "alternate universes" and the Negative Zone. Depending on the sourcebook, there are more magic bad guys than any other origin. There's even a city full of magic, Vibora Bay – especially irritating in that it broke the Champions Universe's long-time prohibition against fictional, DC style American cities.
Almost every single hero outside of America gets their magic powers from the region's local magic folktale, representing the EPCOT version of that world culture. If you think this means the continent of Africa is packed with soul brothers with tribal lion-command powers, you'd be right.
Magic, magic, magic. I think Julius Schwartz is getting chafed from all the 360's he's doing in his grave.
This blew my mind. This was where I realized things were out of control. Just in case you think I was exaggerating above. 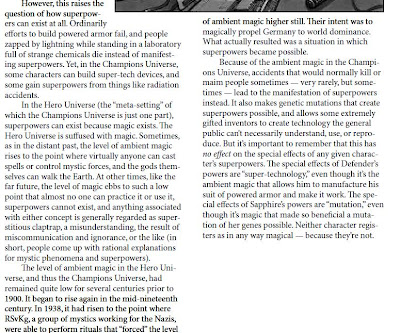 To summarize: "magic makes mutants and power armor work because of the Nazis."
Say what? By the way, this insane page is contradicted by the fact that later on they talk about how technology is relatively higher in the Champions Universe earth because of superheroic inventors. It's like even the book realizes how Medichlorians-level terrible an idea this is and rejects the idea like a viral infection mere pages later.
By the way, if the idea was to bring Champions in with the meta-setting, it choked there, too. There must have been at least as much magic during their Brand-X Conan or Middle Earth age in the meta-setting, and yet I'm betting there were no mutant powers and powered armor then. Maybe it's because there were no Nazis.
I know comics have wizardry involved from time to time but…how many super-mages are there in "real" superhero comics? I mean, can we do a head count here? Guys, this is disproportionate representation.
I play superhero roleplaying games because I've had about a bellyful of fairy-and-dragon fantasy games. I have great memories of running D&D games for my friends in middle school, but if I never run another D&D game again as long as I live it'd be too soon.

Despite the obvious raging boner the creators have for magic, the book is a pretty useful introductory guide to the Champions Universe, and explains what "Hunted: PSI, 8-" on character sheets actually means. It provides an introduction for newbies, and is a great place to start. I'd recommend it, but if you can get it by borrowing it once from your GM for a weekend so you know who ARGENT is, that'd be the best course of action. A lot of it is filler, naturally: a lot of the world setting is about characters that aren't important. Who the heck was Beowulf or MicroMax? The only character from the Justice Sentinels that stands out to me was Diamond, and that's because he was obviously inspired by the Thing.
One thing this book has going for it, though: that may be the awesomest cover of any roleplaying game product ever. They did George Perez in all the right ways!
Posted by Julian Perez at 9:00 AM

This reminds me of how it was revealed that mutants in the Marvel Ultimate Universe were caused by govrenment experiments. And how in the New Universe all superpowers came from the Starbrand causing the "White Event."

I can think of an even more direct inspiration, actually, and that's the George R.R. Martin "Wild Cards" novels where they bring out superpowered gadget users like Jet Boy.

The twist ending is that Jet Boy's rocket pack never worked and what makes the gadgetry of device-using heroes work is actually some subtle superpower they have.

(In context, this is all the more shocking because Jet Boy was very anti-super.)

I think that's what they're TRYING to do here, but they shy away from the full implications of it.

I don't think anybody wants the Champions Universe to be "science fiction," where the fewer departures from reality the better...this is after all, not the New Universe or the show "Heroes" but a place with an Atlantis and the Mole Men. So the pre-eminence of magic is baffling.

I suspect that these guys were primarily Tolkien fans, and their minds have trouble switching gears away from that.