Back in the Old Days, if you were an artist that worked in comics, you didn’t want to do a comic book: you wanted the high profile, prestige and visibility of a daily newspaper strip as opposed to the toiling obscurity of comic books. One of my favorite details in “Kavalier and Clay” is that doing comic books was a step above being a pornographer…but only barely! Strips were the ticket to the big time.
So color me surprised to discover the Star Wars daily comic strip in the late 1970s was plotted and drawn by old-school comic book guy and Korean war vet Russ Manning, creator of Magnus: Robot Fighter. Apparenty he was going to retire but instead went back to comics simply because he loved the movie Star Wars that much. Now that’s passion!

And what can I say? It’s gorgeous alright, classy and old-school cool, Russ Manning brought his A-Game. He’s the only comics artist I can think of that draws Darth Vader in a way that feels “right” to me, that draws Storm Troopers in a frightening way. He’s a master of monsters and machines. As for his Luke Skywalker and Leia, his drawings look like Luke and Leia, though they look nothing like Mark Hamil and Carrie Fisher! If that makes sense.

However, I can’t help but shake the feeling that Manning should have worked with a plotter on this, someone that understands Star Wars, like Archie Goodwin. For one thing, Star Wars is so lively because of the characters. I can’t think of one line of dialogue that Han Solo would say, with his distinct swagger and smarminess. Luke was a hero and audience identification figure, but he was also reckless, “fast and bumpy,” and was always spoiling for action. I can't think of one time in the daily those characteristics were on display.

I guess that’s my overall verdict: Russ Manning was a godlike artist at the top of his game who may have been the most beautiful Star Wars comics artist except for maybe Walt Simonson or Duursema, but in terms of plotting and character he was past his prime, developing as a writer in an era that didn’t value characterization or unpredictability. In that sense he reminds me of Otto Binder and yes, even Jack Kirby and Chris Claremont these days anyway: once-great creators who stopped being relevant when comics changed and they didn’t. Though to his credit, Manning always kept his dignity and didn’t descend into Otto Binder foolishness; Manning’s plots were predictable but clean and correct.

(In fact, I always thought of Jack Kirby after Marvel as very similar to George Lucas: he receives more than his fair share of credit for something that was a collaborative effort and when he works on his own and calls the shots, he delivers something weird and ugly. In fact, the Fourth World was Kirby’s Episode I: highly anticipated like nothing else. There was even talk the Fourth World was going to be a “Marvel-Killer.” Ultimately, it was a giant Episode I-esque creative disappointment. Episode I words like “disappointment” and “shock” can describe practically everything Kirby did during and after the 1970s. His much-touted return to Captain America without Simon or Lee featured weird and ugly stuff like the doughboy and the madbomb.) 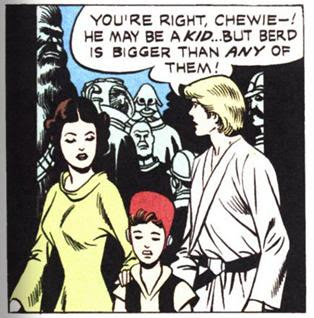 Russ Manning also broke the one great unspoken no-no of Star Wars when he made some insufferable little kid a part of the story, for which I want to choke the life out of him with my bare hands. The greatest thing about Star Wars was there were no little kids running around. Little kids are unfortunately common in adventure comics prior to 1950, and they’re all terrible. Not some of them…all of them. It’s unfortunate Manning had to export the bad habit of little kids to a comic like Star Wars where it doesn’t belong. I’ve never understood the reasoning behind making a kid a part of something aimed at kids. Imaginations don’t work that way. Kids dream about and pretend to be heroes like Batman or Han Solo, or bad guys of a grand and terrible type like Darth Vader or the Joker, precisely because they’re not kids. I have no idea what went into the decision to make kids the main characters of Star Wars phenomena like the forgettable Jedi Prince books and the various Ewok TV specials.

Star Wars was something kids loved, but precisely because it was never childish. People were killed in Star Wars, something the movies never covered up. This, by the way, is why people were so offended by “Greedo shot first.” So it blows my mind to see Manning’s strip actually do Comics Code stuff like have the bad guy get “accidentally killed by a ricochet.” What, he couldn’t have “tripped and fallen into his own deathtrap,” the preferred ironic means of death for Doc Savage villains? Bad guys have to die because of poetic justice for the awful things they’ve done, but the “fall into your own deathtrap” accident leaves the good guys’ hands lily-white. Somehow, I don’t think Han Solo would either a) have any qualms about blasting a lowlife Imperial officer Nazi type, or b) miss. 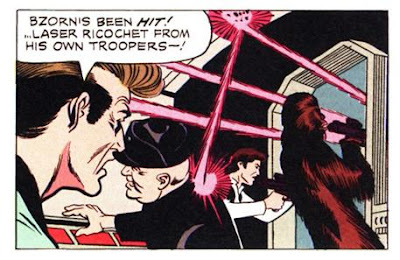 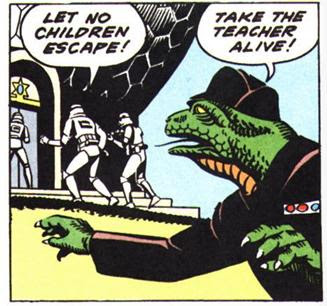 The Star Wars strips were responsible for giving us a bad guy that became a big figure in the expanded universe: Blackhole, a creepy, memorable villain that moved like a shadow. There were some other bad guys too. One of the more surprising was an Imperial Officer who was a sort of snake-alien. This is, to the best of my knowledge, the only Imperial Officer other than Thrawn to be a non-human. A big part of Star Wars lore is that the Empire was racist and classist, and officers were from the aristocratic classes and were never derived from the rabble of the enlisted men. This was probably due to the fact that as the Star Wars movies were all filmed in England, most of the non-principal cast brought from the States were English actors. Anyway, it’s an old Hollywood habit to hire Brits to play Nazis in war movies, which Star Wars kept, since it was all basically World War II in space.

I always thought this was one of the more unusual things about Star Wars: the bad guys were white and upper-class, as opposed to villains that are malevolent because they’re vaguely ethnic. Offhand I can’t think of any other science fiction group were this was done. Even the Klingons in the otherwise progressive Star Trek were swarthy types, typically played by Greek, Jewish or Italian actors (and black actors in the Next Generation on). 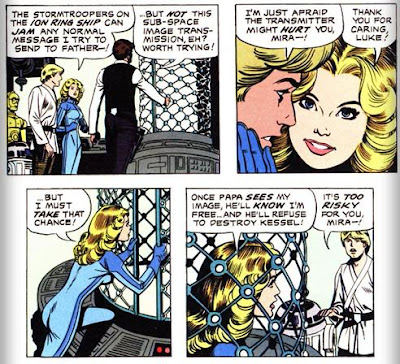 The Star Wars expanded universe operates under the hilarious conceit that Luke Skywalker would get more female action than the cooler Han Solo or Lando Calrissian, and the Manning comics are no exception to that unbelievable rule. All of the girls teamed up with Luke and “liked him.” 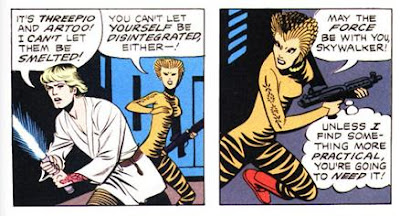 Science fiction comics have always been sold under the va-va-voom factor, and pay no attention to Calvinist hypocrites that say otherwise. Heck, to anyone that tries to argue that comics fandom has gotten hornier and dumber over the years, I’d offer as my rebuttal pretty much any given lettercol for the original Planet Comics: all the letters pages talked about was who the hottest space babe in the book. I’m not kidding, read them for yourself. They’re as unpredictable as a stable-hand’s hidden passions.

In fact, Russ Manning even used a G-rated version of one of Star Wars’s favorite plots: the Star Wars “It Girl,” Princess Leia, becomes a slave girl. They did this in a much more famous way with the slave bikini in “Return of the Jedi,” which got a cover in Rolling Stone and Vanity Fair, and was also a plot point in Alan Dean Foster’s novel “Splinter of the Mind’s Eye.”
Posted by Julian Perez at 7:10 AM

Great observation about the parallels between Kirby and Lucas. I hadn't considered it before, but it's a perfect analogy. With both, there's a feeling of, "Sir, we'll be happy to make a god of you if you'll only retire, now. Please?"

As for kids ruining adventure tales, I offer Canniff's Terry, Wildey's Jonny Quest and Herge's Tintin. Which is kind of cheating as they were the stars and not just cynical add-ons to capture the "kid" demographic, but they were those rare kid characters a kid might actually want to be.

Thanks! There's a comparison in there also to Elvis and Michael Jackson, too...both of them were, at the time of their deaths, not well liked and viewed as irrelevant, and that common attitude was swept under the rug after their death. Michael was, like Kirby, known as a weirdo that hadn't produced anything good in a while...and then there was the Fat Elvis. After death both were practically canonized. But up until his death people called Kirby "Jack the Hack."

There's a great very dark comedy about how we tend to rewrite history and romanticize people after their death, "World's Greatest Dad" with Robin Williams.

I will admit I haven't read every single Tintin and Terry and the Pirates comic ever printed, but at least at the time of the stuff I read both Terry and Tintin were adolescents with real jobs. Terry was some kind of military scout (?), and Tintin worked as a reporter.

I don't think that's as outrageously unbelievable-slash-offensive to have a teenage reporter and a young soldier be heroic figures.

It's hard to say, and perhaps totally subjective what the dividing line is between young people heroes and annoying kid heroes, but I found Tintin comfortably on the "young person hero" side, just like Luke Skywalker, and on the other side you have Wesley Crusher, any Robin, and the little kid from Episode I that we were supposed to accept was a genius mechanic that builds robots and cars in his spare time, who destroyed the starship "by accident."

Hmmm, maybe I hit it on the head. The thing I found so annoying about kid heroes like Wesley Crusher and young Anakin was they had no real conception of what was going on around them and what was at stake. Anakin saved the day and blew up the evil starship by mistake.

At least Anakin confirmed the cute genius kid sidekicks grow up to be despicable threats to everything decent and good.

Incidentally, you can add Roddenberry to your list of guys who create something great with talented collaborators, then somehow develop a cult of personality as a lone "genius" and go on to crater spectacularly when given total control. Luckily in his case the suits stepped in and took the toys away from him after TMP. (Of course he then got TNG, but you'll notice that only got good when others took over, a few seasons in).

The problem seems to come when these guys start believing their own press. And the problem's even more pronounced with Lucas and Roddenberry, who *write* their own press, then believe it.