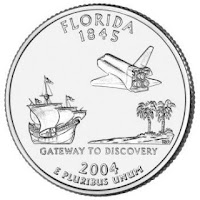 The Florida 50-State Quarter is so dull that I think I dozed off when looking at it. A collage of mostly empty space with the space shuttle and what I can only guess is Ponce de Leon's galleon. What, they couldn't do like the ugly Wisconsin quarter and cram in images of our principal products? (I'd love to see a state that's praised as "First in Bauxite!")
All this becomes all the more shocking when one considers all the great imagery that could have been used for the Florida quarter, like an image of the dead rising from the grave to vote in elections. Amelia Earhart leaving Hialeah and then crashing to her doom. Perhaps images of a few of Florida's real natural treasures, humorists like Carl Hiaasen or Dave Barry, or maybe one of those ultra-tacky Daytona mermaids. 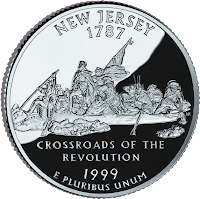 The trouble with the state quarters was they were predictable. Try to guess what was on the Maine quarter. Go on...guess.
The single two best quarters were those with unexpected themes. For instance, New Jersey's quarter was dedicated to the state's military history as the site of many Revolutionary War battles. It's easy to forget that Jersey, all spray tanner jokes aside, was the site of many turning-point battles during that conflict.
When you think of New Jersey, do you think of military history and the Revolutionary War? No, but it's great to see Jersey get a shout-out.
And my all-time favorite was Alabama.
When you think of Alabama, do you think of Helen Keller? Not really, and that's why there's something genius about it. It shows there's a lot more to that state than college football and Martin Luther King. 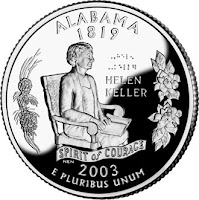 It's worth noting that recently a dollar coin was unveiled to celebrate 200 years of the birth of Louis Braille, a coin that actually features Braille on the front!
Posted by Julian Perez at 4:43 PM

Not to alarm anyone, but that shuttle is clearly on approach for landing. In the water. On top of a ship.

Maybe they could have done a hanging chad on the back? Or a "Mickey" hat? Personally, I'd only have been interested if it was a portrait of Crockett and Tubbs.

As for the Florida coin, I guess it would be too hard to depict a bunch of narrow-minded old Cubans obessing over what goes on in the Homeland on such a small space.

A hanging chad joke! Damn, I knew I missed something.

Here's a Miami Vice story for you: when the family first moved to Miami, we lived a block away from this place that was so opulent it was almost crass, a dead ringer for Tony Montana's place in Scarface. My first reaction was, "wow, that looks like a drug dealer house."

And interestingly enough, I heard later on that very place was actually used in the filming of the original Miami Vice, back during the "Cocaine Cowboy" days when this town was supercool, as a drug dealer's house.

Here's the kicker. At some point after I moved away, I heard stories that the occupants of that house were arrested for...you guessed it: drug dealing!

A quarter dedicated to beating children? What is this, Australia?

Theres an idea for a Miami quarter, a Cuban Abuelo telling his grandson to behave or he'll take off his belt. (Something I actually saw once at a Publix)

The "kid beating" thing is a joke, of course, referencing Julian's fondness for this license plate:

Which in turn is a cousin to this one:

The real quarter honors the 1607 Jamestown settlement, in that subtle fashion that says, "We were here first!"