3-D movies are not a gimmick or fad, and they're here to stay... 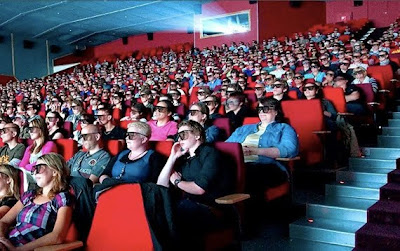 By this time last year, James Cameron’s “Avatar” became the highest-grossing movie in history, and it hasn’t really been analyzed just why that is.
People went to see that movie over and over, not just because of the novelty of 3-D, but because of the effect that 3-D accomplished: as a result of the 3-D, you felt more like you were “there” on a totally different planet. In short, 3-D was used to immerse the audience into a different world, just like the elaborate and exhaustively researched ecology and biology of Pandora made the world feel more real. There was a point to that movie being in 3-D: the world of the film felt more real and magical, as opposed to just because James Cameron had the technology to do it; 3-D accomplished something that improved the movie.
A similar phenomenon can be seen in the movie “Tron Legacy.” If 3-D was just a gimmick like its cynical critics say, the entire movie would be in 3-D…but it isn’t. The scenes in the “real world” are in two dimensions, while the scenes inside the computer world of Tron are in 3-D. It reminds me a little of how the Wizard of Oz used technicolor: there was a point to that film being partly in color other than just because they could. Color was used to show the audience they weren’t in Kansas anymore; the drab, black and white Kansas contrasted against the colorful, fantastic and otherworldly land of Oz. Color made you feel differently about Oz than you did about Kansas. 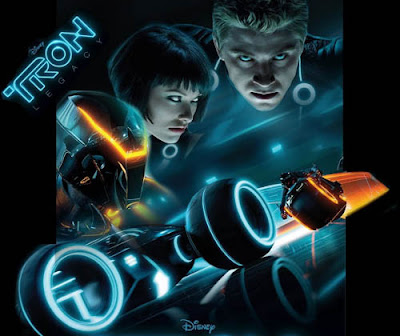 In short, my point is this: 3-D is not a gimmick or fad. It is a new technology that adds to the tools used in movies to affect the audience, just like color, sound, a soundtrack, cinematography.
Sure, 3-D is something you can get in the theater that you can’t get at home (at least right now, for most people). In that sense, these movies are virtually pirate-proof. And there are many directors and movies that make 3-D films that don’t utilize this technology properly, where the 3-D is incidental or pointless, but there are also many movies that misuse special effects or have a terrible soundtrack, too. But all this is incidental. That doesn’t mean that soundtracks and special effects by themselves are.
Here’s a prediction: 3-D is not only not a fad, it’s here to stay. I am not saying that 3-D will alchemically and magically change bad movies into good ones, or that every movie with 3-D will be good or use 3-D properly. I am saying that 3-D will be used in increasingly intriguing ways by men of vision that understand this new tool’s potential.
Now, don’t get me wrong, 3-D can be used as a cheesy gimmick, which is why many movies made in 3-D have the usual “tomato flying at the screen” shot. But consider this. While I was watching “Tron Legacy” with a friend, there was a 3-D trailer for “Pirates of the Caribbean 4.” In one shot of the trailer, Johnny Depp is leaning against a wall when suddenly a sword bursts from the very wall he’s resting against. This shot would have been boring and pedestrian in 2-D, but in 3-D, as the sword was coming out right at us, it made everybody in the theater practically jump out of their seats. Because of 3-D, we felt exactly what Johnny Depp must have felt in the scene: shocked and startled. The essence of good filmmaking is to make the audience feel what the characters feel, so mission accomplished.

3-D is like color or sound or special visual effects, just another new technology that can improve the artistic value of a movie, another way to make the audience feel something, or express an idea, or create a mood. Yes, I am explicitly comparing 3-D movies to the arrival of sound and color.
The Example of Sound

There’s plenty of historical precedence for something starting off as a gimmick but then becoming a legitimate part of the movie-maker’s toolbox. Did you know that the early sound films were pretty much musicals? They called attention to the newness of the talkie. There was Ziegfield’s Follies' 1929 "Glorifying the American Girl," a cute movie featuring a kitchy, sexy stage revue – no plot, story or characters, just dancing girls and music. After seeing a movie like Ziegfield’s Follies, from the perspective of people in 1929 it’s easy to come to the conclusion that sound is just a gimmick that calls attention to itself or a fad. In fact, many people in the film business said exactly that: sound would never replace the silent film.
Since then, sound and soundtracks are a part of film-making. Creepy noises and the sound of footsteps are used to heighten fright and suspense. The most extraordinary thing about Mae West is her sexy, distinctive voice. Like Jack Nicholson or Shatner, you imitate her, everyone knows instantly who you’re goofing on. It’s no coincidence she became a star right when talkie films replaced silent films.

The Example of Cinemascope or “Widescreen”
Prior to 1950, most movies were made in a “square” aspect ratio. When the technology was made to film in a wide screen (“Cinemascope”), at first it was just a gimmick meant to provide a wide-screen experience that televisions couldn’t provide, until movie makers saw the potential of the wide-screen. Nowadays every movie is “wide screen” as is every single movie theater screen.
Ask any baby-boomer you like about what they remember about “This is Cinerama” and they’ll probably tell you “The Roller Coaster Ride.” Imagine watching the movie screen double in size and then getting a first person view as a roller coaster streaked over the screen on a track. This wider screen really wowed audiences, but “This is Cinerama” was a plotless movie where the entertainment value was in the gimmick of a big screen. I can’t help but think about what cynical critics said about “Avatar,” in that instead of a movie it was more like a theme park ride.

It took other movies to realize the creative potential of the larger movie screen aspect ratio. Huge scale, epic movies of the fifties and sixties like “Ben-Hur” and “How The West Was Won” used widescreen to show off the incredible scale and size of the events. In fact it’s hard to imagine now that “Gone With the Wind,” made before widescreen, was a “square” film.
Finally, when widescreen was normalized, film-makers used the wider screen in composition. Take “The Graduate.” In one scene, Anne Bancroft’s Mrs. Robinson is at one end of the screen, and Dustin Hoffman is at the other end. The older Mrs. Robinson is trying to seduce the young college graduate. The giant space between the two emphasizes the awkwardness the main character must be feeling. 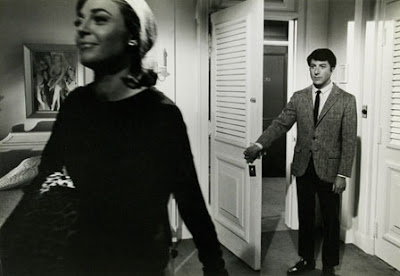 This seems to be a trend among how new technologies are used in film, a series of stages. First they’re just used to call attention to themselves, as in “hey, everybody! This movie has sound!” Then they’re used for spectacle. Finally, they are a normalized part of film-making that film makers use for creative effect. There is no reason that 3-D will not follow this pattern.
The Example of Color 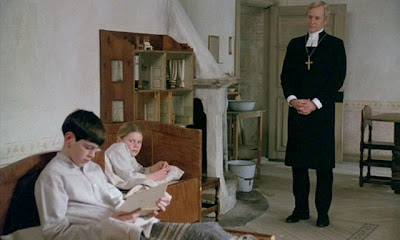 I already mentioned how “The Wizard of Oz” wowed audiences not just by using color but by using it to project people into a totally different world. The land of Oz feels more magical and interesting, a totally different world, because of how colorful it is. Again I think of “Avatar” and "Tron Legacy," in that it used 3-D to great effect the same way “Wizard of Oz” used color, to show you’re not in Kansas anymore.
Here’s another example of how color is a technology that can be used to creative effect. Ingmar Bergman was slow to accept color and made most of his films in black and white even after color became so normal it was an expectation, and his use of black and white became an idiosyncratic affectation that really stood out. The first film he ever made in color USED color. “Fanny and Alexander” was about a kid that goes to live with a cold, puritanical Lutheran stepfather. Scenes at the kid’s loving grandmother’s place feature warm, passionate colors, while scenes with his evil father’s have drab grey and brown, Spartan colors that instinctively make the audience feel how cold and austere his puritanical and abusive stepfather is. 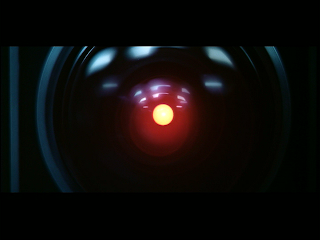 HAL 9000 had a bright red, malevolent eye so you immediately know he’s a bad guy. I’m actually surprised Kubrick didn’t give that evil computer a British accent to add to his villiany.
At the end of the day, the real world is in three dimensions but the cinema, until recently, was flat. That’s why “Avatar” was so successful in transporting people to another world.
There are all sorts of ways that 3-D can be used creatively, not as a gimmick but as a normalized part of film. 3-D can make great heights seem even more dizzying and vertigo-inducing, for instance, and add to the tension, danger and drama of scenes set in high places for suspense and action movies. In short, there’s a point to showing and making movies in 3-D other than just a “theme park ride” or an excuse to jack up the ticket price. In 20 years, opponents and critics of 3-D movies will look as ridiculous as critics of “talkie” movies did in the 1930s.
But here’s my message to Hollywood and film-makers: as always, the future is counting on you. If you think 3-D is just a faddish gimmick, that’s all it will ever be. Realize the potential of this extraordinary technology. This is a once in a generation opportunity to innovate and do something no one in movies has ever done before, to leave your mark on the language of film. You’re in the right place at the right time. Bring movies into the third dimension!
Posted by Julian Perez at 6:08 PM

Its like I said when we were talking about this earlier, you have a point. However, its not just critics that you have to convince, the fact is the technology is still be treated as a gimmick. For every Avatar and Tron legacy, you have Clash of the Titans and moments like when Kato throws two bottle caps at the screen in the Green Hornet trailer.

In order for your vision to come true, Hollywood Studios need to be convinced that 3-D can grow beyond its whizbang, golly gee whiz, gimmicky origins. Otherwise, it will never join the ranks of things like sound, color, and wide-screen

I agree with you that 3-D can be more, much more than just a gimmick where people in the movie throw tomatoes at the screen or something. Even that, though, can be used in creative ways. Imagine a war movie about the horrors of combat, something like Saving Private Ryan, where a mashed potato grenade hurls right at the screen. I guarantee in 3-D you'd be a lot more startled and frightened. Which is precisely what the character must be feeling!

Also, don't forget creative use of space. Just like the Graduate used space and the big screen to create a feeling (awkwardness) that goes a million for 3-D movies created for 3-D. I hesitate to give an example of how this can be done well because nobody's done it yet. The best 3-D movies have yet to be made.

Are you still claiming 3D wasn't a gimmick or a fad?