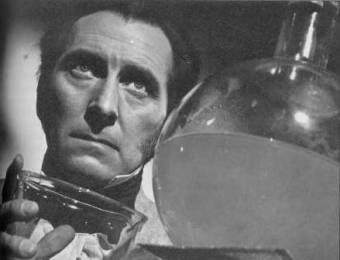 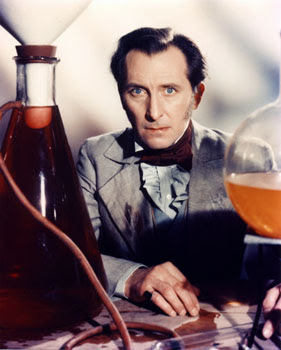 Of all the characters at Hammer Horror studios, by far the most complex and interesting was Baron Frankenstein, played by Peter Cushing.
The Baron was the central character of all the Hammer Frankenstein movies, and his creature, the famous Frankenstein Monster, was practically an afterthought and didn't even appear in some of the Frankenstein movies. Hammer realized, correctly, that the man that
made the monster was more interesting than the monster himself. Peter Cushing's reptilian performance as a cold, cruel, ambitious man was the most chilling part, and he was brilliantly cast; by all accounts Peter Cushing was a really great guy in real life, but at least in the movies he always had a look in his eye that showed that he was a scary creep with a hard edge.
The most fascinating thing about the Peter Cushing Baron Frankenstein was, he could be a hero or a villain depending on the movie, yet the character never really changed. Depending on the movie, he could be a sympathetic genius visionary hounded, misunderstood and persecuted by superstitious, dimwitted and prejudiced little men and angry mobs who destroy anything they don't understand as he was in Evil of Frankenstein...or, he could be a coldblooded, ruthless and reptilian fiend that destroys anyone's lives and even commits murder to get what he wants, heartless and inhumane, the way he was in Frankenstein Must Be Destroyed.
There's something kind of likable, despite all his bad qualities, in an arrogant and sharp-tongued character like Baron Frankenstein that doesn't suffer fools or the superstitious gladly. He runs into all kinds of problems because he isn't charming or tolerant.
One of my favorite scenes features Baron Frankenstein overhearing a guy talking about how the former Baron Frankenstein was guilty of "ungodly experiments." His response?
"Pardon me, sir, but are you a doctor?"
"Ah, no sir."
"Ah...my apologies. I thought you knew what you were talking about." 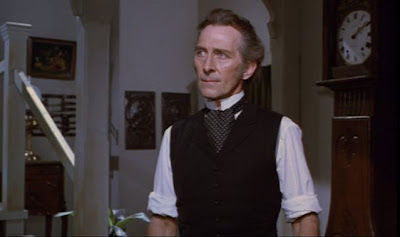 Likewise, Frankenstein, over and over, was legitimately wronged and his misfortunes, caused by prejudiced people that never leave him alone, have been exploited. In one scene, Baron Frankenstein returned to his villiage in Switzerland and was outraged to see the burgomaster of his former town (who rose to his current status for kicking Frankenstein out) wore a ring that originally belonged to him! And it got worse. When following the guy home, he discovered the burgomaster's entire house was filled with the Baron's furniture!
Posted by Julian Perez at 4:50 PM

As a lifelong Hammer horror fan, I want to say how much I enjoyed reading your post on the great Peter Cushing as Baron Frankenstein. I couldn't have put this description of that iconic character better myself. Long live Hammer horror!