The New Shadow, Tolkien's Lord of the Rings Sequel 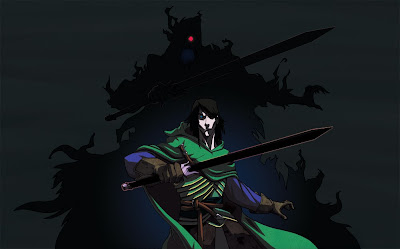 For those that love "Lord of the Rings," I was fascinated and intrigued to hear about Tolkien writing...and abandoning...a sequel to his most famous work, set in a time when only Men live on Middle Earth during the era of the Unified Kingdom ruled by Aragorn's descendants.
Because there was very little wonder left, the work, "The New Shadow," was crushingly dreary and dark, but in a fascinating way like a good chiller book. The story fragment, set in a time when Goblins and Orcs are legends, features a fighting man in Gondor that discovers remnants of a Satan worshipping cult, of humans that behave like Orcs and cut down trees for no reason (which in Tolkien's world, is quite possibly the most dickish deed possible).
The thing that strikes me the most as interesting about the New Shadow is how similar it is to Conan the Barbarian. Bear with me here. The main character is a solid, regular fighting man whose primary virtues are his simple honesty, traditionalism, and fighting prowess. He lives in a complacent era, with rulers that are merely competent administrators. Most impressively of all, the main villains are frightening Satanic cults dedicated to the worship of scary pre-human societies.
All in all, I'm sorry Tolkien abandoned his Lord of the Rings sequel after 16 pages. It would have been a great insight into an era of Middle Earth that was phenomenally underdeveloped and been a great middle ground between the mythic pessimism and tragedy of the Silmarillion, and the realism and grit of the Lord of the Rings.
Tolkien's reasons for abandoning the New Shadow strike me as incredibly harebrained. According to Tolkien, the reason he gave up was because he felt the sense of wonder that existed in Middle Earth no longer existed come the Age of Men, and because without Sauron there wasn't a single source of evil in the world that transcended the possibility for human evil. For the first point, the very curiosity that many people have about events after Lord of the Rings ends shows there's obviously some creative potential there even without Elves and Wizards.
The second point is enormously wrongheaded. The worst part of Lord of the Rings was a central villain who was inaccessible, remote and entirely in the background with inhuman "Evil with a Capital E" motives. How much stronger that book series would have been with an ever-present "Doctor Doom" type villain with an actual personality and comprehensible human motives.
Also, the idea that all evil has to have a single source and that evil is a unified force is one of the greatest errors in conservative and Christian thinking. One of my all-time favorite examples of this phenomena is the Tea Party's current unification of high-level bankers with socialism, and the inability to tell the difference between fascism and communism. How a banker can be a socialist defies my understanding, but there it is. It reminds me also of the evangelical protestant view that pornography, radical feminism and the coarsening of our culture are ultimately the doing of a conspiracy headed by Satan himself. Again, the idea that feminists and pornographers both do the bidding of a single Master requires mental gymnastics I'm not capable of.
Posted by Julian Perez at 1:46 PM

It does suck. However, as great as Tolkein is, maybe he was not comfortable writing something without using elves and dwarves as part of the wonder.

Eddie - have you read the Silmarillion? It was not as realistic as Lord of the Rings, much more surreal and less grounded.

Anyway, surely there's a dragon or two left out there somewhere...!

Never read Silmarillion. I've been meaning to check it out but have never gotten around to it

That's alright, the Silmarillion is nowhere near "required reading" for Middle Earth aficionados.

Other than explanations for what exactly Numenor is and why it's important, I can't remember a single thing I learned in the Silmarillion that somehow enriched my understanding of the stories that already exist, and a lot of really dumb ideas I hated.

For instance, you know what Gandalf and the wizards actually are? They're Maiar, an order of beings not unlike Angels (the Balrog, including the one in the Mines of Moria, are of a similar order, only corrupted).

Get that? Gandalf is an angel. If you ever wanted to know the background behind Gandalf and Saruman and Radogast, the Silmarillion will make you REGRET ASKING.

The reason the Silmarillion bugged me so much is the same reason so much of the Star Wars expanded universe annoys me: it turns the main characters and their current conflict into almost an afterthought. For instance, in the grand scheme of Middle Earth, the War of the Ring that is the central conflict of the story that really matters is basically just a mop-up job handling unfinished business...and Sauron is hardly a supreme or even major evil in the grand scheme of Middle Earth, but a jumped up henchman for a previously unmentioned Big Bad, Morgoth.

The dragons that exist in the age that we care about and is really important (the age of the war of the ring) are tiny has-beens compared to things of the ancient world. Even the War of the Ring was a downright second rate conflict compared to things that happened in the first and second age.

That said, there were a few things that I actually did like. My favorite was the background behind Elrond. Apparently, he was half-human and had a brother. He and his brother had to choose between a human and immortal existence. Elrond chose to be an elf, whereas his brother chose mortality and founded the line of kings that eventually led to Aragorn. Very cute story.

Maybe...and your mileage may vary...but I always thought the Silmarillion focused extensively on the least interesting parts of Middle Earth to me: its mythic beginnings and the early Elven kingdoms. I always found the immortal, wise and fair elves inhuman and boring as shit, especially compared to the more blood-and-thunder, violent and energetic human cultures, or the plucky Hobbits that so much energy was invested in their creation - turning them into irrelevancies never mentioned once when they're pretty much the central characters is a pretty lame thing to do.

Your mileage may vary of course. But if I had my way, the New Shadow would exist in full whereas the Silmarillion would be sketchy, half-completed notes for an abandoned project.

Julian, you have it backwards: To Tolkien, the Silmarillion was the chief work, which he started first and worked on after. The Lord of the Rings was the afterthought, the sequel his publishers wanted that wound up being much more than he had originally planned.

In other words, if you're actually a "Middle Earth" aficionado rather than just a swords-and-sorcery fan, the Silmarillion is more important reading than LotR itself. The only thing better would be the scholarly version: the 12-volume History of Middle Earth.

Tolkien always said that the Silmarillion was more important than Lord of the Rings but that's ultimately not an author's judgment to make.

Mark Twain always said his best work was his only non-humor novel, "Joan of Arc," a serious novel without his usual wry cynicism or humor, played totally straight about a girl he based on his daughter.

Mark Twain used to write books that made fun of works like Joan of Arc and it was depressing to see him constantly defend it.

I always thought the Silmarillion was Tolkien's Joan of Arc: a work the writer defends precisely because they confuse the lack of humor and humanity for grandeur.

Also, I'm disturbed you'd make liking or not liking the Silmarillion as a purity test for Tolkien fandom.

Take a look again, strider mentions morgoth, not by name by just after he sings the lay of beren and luthien Aragorn briefly mentions their fight against morgoth

in lothlorien legolas metions the balrog of morgoth, the reason he isnt really mentioned in lotr is because he wasnt there. he was the main enemy in the silmarillion. every body has their own opinion on what they believe matters, the ring in lotr and the silmarils in the silmarillion. i personally like all three, the silmarillion for its timelessness, the hobbit for its magical feel, the lotr for its feeling of fantasy and realism.

if you are an aficionado(just looked it up)then you maybe should read the silmarillion, it tells of how middle earth began.

I do love when people make assumptions about Tolkien as if he was some bog-standard comic book or pulp writer and not a man who put literal blood, sweat and tears into his every word. Just for example:

"I always thought the Silmarillion was Tolkien's Joan of Arc: a work the writer defends precisely because they confuse the lack of humor and humanity for grandeur."

Yeah, no. That's not the case at all. Tolkien never "defended" the Silmarillion in the face of unreasoning criticism--in fact he was VERY aware (as you would know if you ever read The Book of Lost Tales Volume 1) that people would have exactly the issue which you expressed--a feeling that Middle-earth is somehow lessened through knowing more about it rather than just the hints LOTR gives (Lost Tales itself details an attempt to write an alternate Silmarillion that attempts to preserve the mystique by having the tales be things that some sailor heard in his travels). He didn't just bullrush the Silmarillion out the door in spite of everyone's objections, and for that matter not everyone objected to it--judging by letters the man had gotten before its publication and its sales figures following (as well as the sales of its follow-up Unfinished Tales) I would say plenty of people wanted to know!

By the way, about "The New Shadow" where exactly did you hear about Tolkien's reasons for abandoning it? I never heard that particular reasoning. There was a discussion about this just recently on TheOneRing.net forums and not once did anyone bring up needing a spiritual evil. Link: http://newboards.theonering.net/forum/gforum/perl/gforum.cgi?post=899219

By the way, to the guy suggesting that Tolkien wasn't comfortable writing books without elves or hobbits... Roverandom, The Adventures of Tom Bombadil, and the recently-published Story of Kullervo.

As for the idea that Sauron needed to be more like Doctor Doom... so, Sauron should fail constantly then have all his failures retconned into being "that wasn't me, that was a robot duplicate?" Yeah, funny thing about comicbooks.... they're idiotic, written by bored middle-aged men who do it for a paycheck without really caring how good the finished product is (they actually can't care too much since the schedules basically force them to print the first draft, which no good author ever does if they can help it). It doesn't surprise me a person raised on such works would have faulty ideas about Tolkien, much the same way a child raised on M&Ms won't appreciate the taste of spinach even though the latter is much healthier.

In all honesty, there was some creative potentials here and there, but it would have been better if Tolkien had added a few mystical creatures that was left in middle earth and maybe the revenge of utumno because if you've read the silmarilions or the lost tales, utumno was destroyed but not all the caverns were destroyed and therefore, evil still lingers.