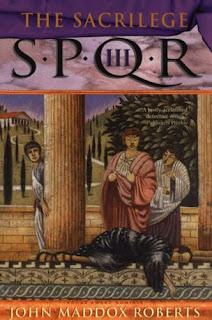 John Maddox Roberts may be one of my favorite historical novelists. When he wrote about Rome in his SPQR series, I always had the feeling that, of all the versions of Rome we've seen or experienced, that JMR's was the closest to how it really was: noir before its time, bustling with criminal cartels, prostitutes that knife-fight each other over turf, where even a Senator's life was cheap if he went into the wrong part of town at night, a place of pug-nosed gladiators, where the line between being a gangster/mob boss and being a politician was so thin, the two jobs were practically interchangeable. John Maddox Roberts's Rome was not a nice place to live, but it was cool.
And best of all, JMR always had sense of humor about things. This was in great contrast to many other stories about antiquity that take themselves way, way too seriously. In general, Sword & Sandal and Roman epics are dead serious, with dead being the operative phrase.
JMR also wrote some speculative (what-if) history with his book "King of the Wood," and it's a real relief to read an alternate history that somehow doesn't involve the Nazis. In "King of the Wood," the Vikings reached America, but this time they came to stay. The northern kingdom, from Canada and so on, was Treeland, whereas the southern kingdom was Thorsheim, founded by pagans fleeing religious persecution. 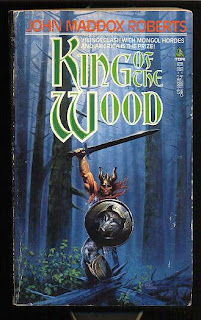 It doesn't surprise me that John Maddox Roberts wrote Conan novels, because the main hero of "King of the Wood" was basically a Conan-type hero that did Conan-type things. A noble from Treeland, he was cast out from his country for the crime of kin-slaying, becoming a "Wolf's Head." The hero is pretty boring, although there is one sequence where he trips balls-out on hallucinogenic drugs that is all the more entertaining because I can imagine it happening to Conan.
Along the way, he encounters the inhabitants of the Americas, including the Aztecs, who are presented, as usual, as a profoundly sick society fascinated by imagery of stillborn babies and human sacrifices in retch-inducing industrial quantities. From what I understand of history this is not that far off the mark.
The book is overall entertaining and chock full of alternate historical goodies in a world that Roberts obviously thought through, but if it is guilty of anything, it's guilty of taking a bit to get to the point. The Mongols are the heavies of the book, and they don't show up until two-thirds of it are done. To JMR's credit, the Mongols are scarier here than anywhere else: imperious, commanding, tactical geniuses in hordes of tremendous size that dwarf lesser armies, with advanced technology for the age and brute toughness...it's great to see the Mongols as history's most frightening villains, a real world hyperpower, as opposed to the goonish cartoon barbarians seen elsewhere.
Posted by Julian Perez at 3:30 PM