Now here's something that had potential... 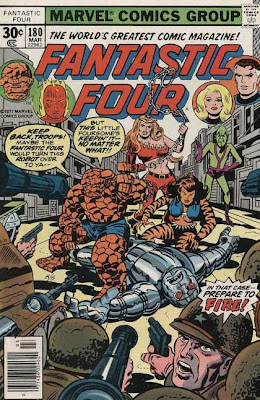 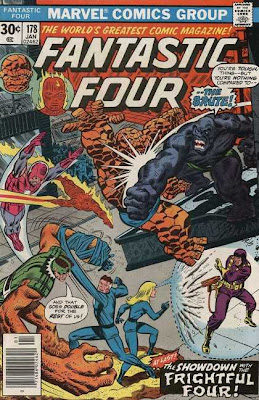 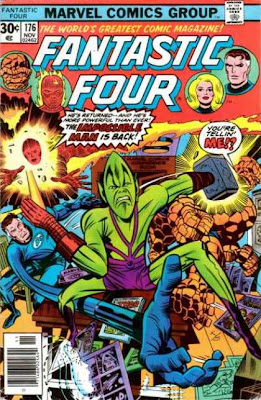 There was one villain that had the potential to be one of the greatest Fantastic Four foes of all time...the Brute. Introduced in the last story arc of the Roy Thomas run on Fantastic Four, the Brute was an evil Reed Richards from the Counter-Earth of the High Evolutionary. Because he never gained superpowers and his Susan Storm was sent into a coma, he was always unbalanced and even more so when he discovered he could transform into the Brute - a primitive cavemanlike monster with the strength of the Thing, Reed's intellect, and troglodyte senses like Wolverine.
Unfortunately, the Brute never got a chance to really be a truly terrible villain because FF changed writers in the middle of his story. This was a shame because this story came hot on the heels of two really well plotted and outstanding stories, one of which was the Frightful Four threatening to execute the FF and having try-outs for villains, the first appearance of Captain Ultra, who like Flag-Smasher and the Alan Zelenetz Crusader, gained a new lease on life when he was one of the people inexplicably chosen to have a Marvel Universe Handbook entry. The previous one had the FF trying to save Counter-Earth by getting another world to become food for Galactus instead. It was the first time someone used Galactus in a new way: as a sign of the horrible moral choices involved when encountering a being like him.
Roy Thomas had been on FF for a couple years by the time he got to introducing the Brute, and the amazing part was, the Roy Thomas run was mostly just okay for the majority of the time, but by the end it made a really spectacular increase in quality and hit its stride. The George Perez art didn't exactly kill interest, either: though it's amazing to see him at an early stage and see that he drew exactly like John Buscema.
The trouble with FF is that sometimes it gets repetitive, reusing the same supporting cast over and over: the Black Panther, the Inhumans, etc. Roy Thomas at least, made an effort to give the FF a new, alternate supporting cast: the Impossible Man, Thundra, Frankie Raye, and Tigra. The Impossible Man was actually surprisingly entertaining. TV-addicted, everything was a game to him. It seems like he got the best lines of dialogue. He was a mischief-prone tourist on earth that thought differently from any human being and for that reason was often extremely dangerous. Roy Thomas made me believe the character had potential, and I have a well-documented allergy to magical midgets.
Roy Thomas's run ended just when he was juggling a half-dozen subplots, and the succeeding writers had to work to tie them up. If Roy Thomas was allowed to finish his FF run is one of the great What-Ifs of comics. These stories included: Reed, powerless, trapped in the Negative Zone while the Brute replaced him outside; a burgeoning love square between Thundra, Tigra, Alicia Masters and the Thing; Frankie Raye, who was terrified of the Human Torch and his fire powers; the Impossible Man lost on earth as a mischief-prone tourist; the kidnapping of Franklin Richards and Agatha Harkness. Unfortunately, not a single one of these stories were finished off neatly, with the possible exception of Frankie Raye, a character that later on, John Byrne really liked and used in a very big way.
Heresy Time! One thing I've always disagreed with is the idea that FF's core roster is fundamentally unchangeable. One of the problems with FF is, as the roster never really changes, the characters get locked into roles and never grow beyond them. Ben and Johnny will always be the brawling kids as long as Reed and Sue are there to play Mommy and Daddy. And I think this is a shame because FF has a real great supporting cast that could become major players for a while.
Posted by Julian Perez at 12:31 AM

In addition to Captain Ultra, the Frightful Four tryouts also gave us the first appearance of Texas Twister

Texas Twister! He's another example, along with the Brute, of a character that obviously Roy intended to make a bigger deal out of, that he had plans for, but ultimately ended up a casualty that wasn't really returned to much after Thomas left FF. In the actual issue itself, his appearance was such an utter non-sequitur that was out of sync with the rest of the story, and Texas Twister was written as a perfectly consummate badass, that it's hard to believe that was anything else except a setup for a later story.

Len Wein used Texas Twister later on in FF when he filled in for Thomas, of course, and had him singlehandedly fight the Human Torch during his arc, where he broke up the FF "permanently."