No wonder nobody Challenges the Unknown much: it's the same crap over and over 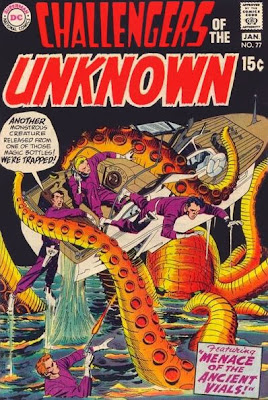 But...but...if you stop after the first four stories, you won't get to the ones Wally Wood inked! For my money, the pairing of Kirby and Wood is one of the greatest in the history of the medium.

I would bail before the Bob Brown-drawn issues, though. Not only are they dull to look at, but by then they've given up on even trying to be original or interesting. I actually read the second half of the Showcase first, so I could savor the front end with Wally and Jack.

This is why I find it hard to believe that Challengers is in any way an antecedent to Fantastic Four. Anyone that says that doesn't understand what actually makes FF great: how interesting and distinctive the four lead characters were.

That's because you're looking at it from the point of view of characterization. On a superficial level, they're very similar: four people crash down from the sky to find their lives changed and dedicate themselves to adventure. It's the same, you see, like "Battlestar Galactica" is the same as "Star Wars" or The Monkees are like the Beatles.

It is curious, though, that the brainy one isn't made the leader (if anything, Ace the jet pilot seems to fit that bill. And I suppose the name "Ace" just reinforces what a cypher he is...of course the pilot would be named "Ace"). In fact, Prof's expertise seems to be scuba work, so we should be grateful he's not called "Flippa Dippa." How dorky is that, BTW, to be the "Aquaman" in a group of non-powered Super-Friends?

Yes, but there have always been people who take comfort in the repetition of stories with only slight modifications. This goes back to the earliest days of spoken language and continues healthily in the Bond films, and elsewhere. But I agree it's like any other taste; either you're into it or you aren't.

Bless you, Julian. This is why I keep coming back here. I never dreamed there was such a thing as a Garbage Pail Kids movie, but of course if there were, you'd be the one to quote it. Awesome.

Oh, forgot to mention that's a very insightful observation about outsiders being "bad" in the DC universe and "good" at Marvel. Luthor loses his hair and turns evil. Harvey Dent, a swell guy and District Attorney goes to the dark side because his face is messed up. In tons of stories, being ostracized, rejected and shunned is presented as a fate worse than death. How many Silver Age covers of Superman, Batman, et al had the hero being run out of town as citizens tossed tin cans and rotten veggies at them? How many times did Superman have a near-breakdown because a new "champion" took his place in Metropolis (instead of saying, "Welcome aboard, glad to have the help")? Silver Age DC was all about fitting in and having friends.

The one exception of course is the Doom Patrol, all weirdos and outsiders. But even then, they really would have preferred to be normal and accepted over being gifted and having cool adventures.

About outsiders being generally evil at DC...

There was a very specific reason I used the example of Lightning Lord there. I can kind of understand why Harvey Dent would turn evil: after all, he believes his disfigurement reveals a secret, previously hidden evil aspect to his nature and drives him criminally insane.

Lightning Lord, though...I just don't follow their thinking with him. I mean, he's an outsider on a planet of twins. Okay. How does that make him evil? I can understand if they were trying to make him a sympathetic enemy like Magneto or something, because that is kind of sad. But the very fact he's an outsider in and of itself makes him malevolent. He's the purest example of what it is I'm talking about here: he's evil cause he's a misanthrope that didn't fit perfectly into society.

By the way, I find it interesting that Gorilla Grodd is a criminal outcast/deviant from his society and culture instead of an authority figure in it. When we first meet Maximus, he's king of the Inhumans. The Mole Man and Tyrannus are kings of their subterranean races, and Namor is ruler of Atlantis. Doctor Doom is a monarch from Latveria, not a criminal refugee.

In the book "Comic Book Nation," one thing that Wright points out is that all the superheroes introduced during the 1950s were either in some way authority figures, status quo guys: police officers or scientists.

It's interesting that the one villain that's cast out from society and is villainous and twisted for that reason, the Mole Man, was introduced all the way back in FF #1, at the very beginning of Marvel. Even then, there was this one story in later FF where they felt the need to explain why he was a villain because by this point I think they were aware that just being a reject wasn't cutting it, especially when you've got a hero like Ben Grimm. So you have the Mole Man piteously whine about how nothing's ever his fault.

Johnny Storm's response? "So you had a gripe! Nobody exiled you to Subterranea! You went there on your own cause you couldn't face up to your problems. Ben Grimm had a lot bigger problem than yours, and he faced it like a man! Alicia, a gal not as lucky as you cause she's totally blind, managed to take on the world and come up a winner!"

I find it very interesting that they felt the need to tell a story like this, to fit the Mole Man better into what Marvel ultimately became. Just being a person that didn't fit in, in and of itself wasn't enough to make you evil after FF #1.

re: Lightning Lord...I suppose you could make the case that residents of his world need a twin to be "all there" mentally; that twins are somehow psychically bound together in a way that maintains emotional equilibrium and even sanity. Without a twin, Mekt would then be mentally unbalanced, and ultimately criminally insane.