I've been rereading "Lord of the Rings" over the past week or so, and something occurred to me that I don't think anybody else has ever talked about. I had just finished the chapter at the beginning of "The Two Towers" were Merry and Pippin were taken prisoner by the mixed band of Isengard and Mordor Orcs.

To me at least, the Orcs are easily the most likeable race on Middle-Earth. Their dialogue is snappy, punchy and to the point, and they have a lot of humor. When the Orcs complain about having to move through sunlight, their leader urges them with, "oh, don't worry, you'll move fast enough with me behind you." There's another sequence where one of them asks if they should stop to rest while in the territory of the Riders of Rohan, and one of them says, "Oh, of course! Then let's invite those cursed horse-boys to a picnic afterward, while we're at it?"

After all the rhymed poetry and poncy speeches...someone actually used sarcasm in "Lord of the Rings!" It was such a breath of fresh air. Maybe the reason I respond so well to the Orcs is because they sound so American. It's interesting how in Hollywood, an English accent adds to your villainy, whereas Brits make their evil forces sound and talk like Yanks.

Anyway, it's hard not to find amusing a song like "Where there's a whip, there's a way."

The Orcs are tough, skinny and capable of sudden, stabby violence for very little reason. They remind me a little of the Nazi villains from "Inglorious Basterds," who were werewolves in human form. 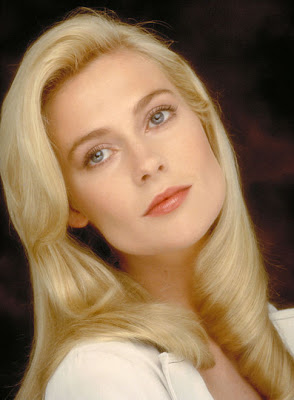 Incidentally, speaking of Rohan, you know who Peter Jackson originally wanted for Eowyn? Allison Doody, best known as the Nazi double-agent from Indiana Jones and the Last Crusade. If you were to ask me what her nationality is, the list would be very, very, very long before it gets anywhere near Irish.

I don't know the circumstances, but shoot...if you look like that, and you can't get a part as a Scandinavian warrior princess, it's time to give up acting forever.

The one and only thing that I think Peter Jackson's otherwise extraordinary film version did wrong was that it explicitly made a character as grandiose and terrible as Saruman a mere puppet of Sauron. Saruman and Isengard was more like a very dangerous third factor at play, a second deadly enemy that wanted the power of the Ring for himself, who, perhaps because the characters actually interacted with him, was actually a more dangerous and interesting figure than even the otherwise dull Big Bad Sauron himself. Saruman was the closest these movies got to a "Doctor Doom."

As a consequence, some scenes just don't make sense. For instance, in the book version of Fellowship, when Saruman offers to use the One Ring together with Gandalf, that "together we can be the Lords of the Ring," Gandalf rebuffs him by saying "there can be only one Lord of the Rings, and he would not share power" (referring to the innate evil, jealousy and corruption of the Ring that makes it impossible for more than one to possess it).
Posted by Julian Perez at 5:57 PM

Wow, I remember that song! It's popped into my head at various points over the years but never would I have figured out its origin. I saw that film in the theater on its release. Still haven't seen Jackson's.

That is a pretty memorable song, isn't it?

I'm a little surprised you missed the Jackson version of Lord of the Rings, considering what a huge pop culture event they were.

The Lord of the Rings movies are actually one of the few examples I can think of where it would be better to watch the movies before reading the books...simply because the movies made it ridiculously easy and idiot-proof to follow the at times complex and necessary backstory of certain elements of Middle Earth...for instance, who Isildur was, the forging of the Great Rings, and so on.

The ten-minute prologue that spoon-fed the backstory of Middle Earth at the start of the first film presented it all much more clearly than anything else. After watching that, I was like, "hey, that's who Isildur is!" With the books you had to fend for yourself.

Thanks Julian. Now that song is stuck in my head. And just when it appeared I've recovered from New Years.

The song is catchy but i still so hate you now.

I realize I'm responding to a rather old entry, but I only just discovered this blog, so forgive my being late to the party. For the most part, I find your writings entertaining, insightful, and informative, but your above comment that "it's better to watch the movies first" is something I simply have to disagree with.

Watching the movies first would likely be a disaster. Peter Jackson's Rings is a twelve-hour episode of Hercules: The Legendary Journeys (or perhaps Xena: Warrior Princess, not that there's much difference between the two). It's full of campy, over-the-top antics with humans and elves who are impossibly badass, dwarves who exist to be goofy, and hobbits who Jackson clearly thought of as "loads" who were weighing down the cool mary sue badasses he'd rather make a movie about. I'm honestly surprised he didn't have Frodo die and Aragorn become the new ringbearer, since he clearly had more fun with the humans and elves (who, after all, are the ones audiences want to have steaming hot sex with).

So imagine the fifteen-year-old testosterone-laden lad who sees the movies, sees elf chicks dual-wielding longswords which they twirl flashily before dismembering an orc, and they say "Yeah, I wanna read that book! It must be so badass!" Then they pick it up and find paragraphs longer than three sentences, evocative prose and poetry that mentions times long past and things yet to come, and not once does Legolas walk up a troll's arm. He's likely to throw the book in a trash pile and go back to watching the latest explosion-filled summer blockbuster.

I'm not saying Tolkien is impossible to do right on film--the animated The Hobbit and Bakshi's version of Lord of the Rings rather felt like they were in tune with Tolkien's spirit, despite their shortcomings, and a person introduced by those films would go in with a decent idea of what to expect, whereas if your introduction is Jackson then you will probably hate the books.

On that note, I'm not sure why you say "with the boks you had to fend for yourself." Every piece of information presented in the movie's prologue is also featured in the second chapter of the novel, the chapter titled "Shadow of the Past." Besides, I thought you said in a previous entry that new readers like being a little lost because it makes them feel like they stepped into a rich and interesting world? Or something like that. It was in your article "Comic Fans Say the Dumbest Things." Why take the opposite stance here?