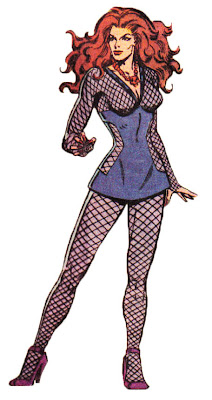 The only time most North Americans think about Cubans or Cuban Americans is if they like cigars or baseball, so it's something of a rarity to see Miami or Cuban culture portrayed in the broader culture...usually by Miami novelists like Dave Barry (who has a Cuban wife) or Carl Hiaasen. Hiaasen must look so weird and surrealistic to people from other parts of the country, but yes, Miami really is like that. I think that may be why film versions of Hiaasen's stuff are such creative disasters, notably Striptease.

I am constantly surprised by Dave Barry's national popularity, especially since his humor is of such a local character that I have trouble understanding why other people "get it."

It's even more fascinating to see Miami and Cuban-Americans in adventure comics. The one and only exception is Steve Gerber, who if his work is anything to go by, is as interested in Cuban culture as much as Englehart was interested in Native American stuff. 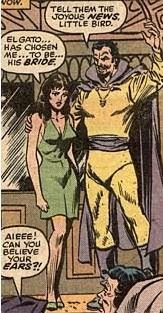 Steve Gerber created El Gato, the mind-control villain of Omega the Unknown #4-5, as a brujo of Santeria - explicitly stated in those very terms. Gerber didn't exactly do his homework on Santeria: for instance, brujo is a term most Santeria practicioners consider denigrating, though it may be possible El Gato called himself that out of self-conscious irony. Likewise, animal totemism is as out of place in Santeria as Norse runes are. Black cats are traditionally used for sacrifice to the Orishas, though, which is why a lot of civic ordinances in (where else?) Hialeah had to be removed to make it possible. Jesus Christ, only in Hialeah.

It's worth noting that this is light-years ahead of how embarassingly Hollywood Gerber portrayed Voodoo in Tales of the Zombie.

Poison was one of those supernatural horror characters Gerber loved to write, ever since his time on Man-Thing. If the two Steves had a weakness, it was their embarassing fascination with the supernatural, something more obvious with Englehart than Gerber. Stainless was fascinated by acid, astrology, and Native Americans to the point it verged on sheer Cherhonkeeism. 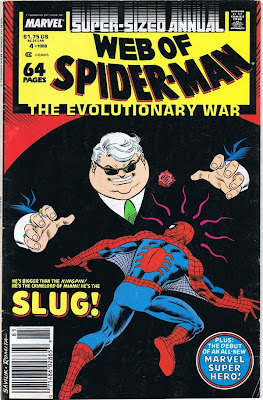 To Gerber's credit, Poison made a superpower as traditional as flying seem new: she didn't soar or swoop but instead eerily levitated while standing up, Exorcist-style.

Poison's origin was that she was in the 1980 Mariel Boatlift, immortalized by Brian de Palma's Scarface. Amusingly, she was rescued at sea when her boat sank in a way that was creepily reminiscent of the weird folklore that later came up around Elian Gonzalez, who was saved by either the Orisha Yemaya-Olokun, or dolphins, or both.

She is also one of the few single mother heroines I can think of, the other being the title hero's girlfriend in Star-Brand. I was always amused that this bit of male chauvanism was never pointed out by the always-wrong "grrrrls" at Women in Refrigerators, the absence of single mothers. Ask any guy you like: the one great unjust prejudice in the dating world isn't against age or weight but against women that already have kids.

Poison showed up in a Web of Spider-Man annual set in Miami, during the eighties, the cocaine cowboy days when this sleazy, corrupt, decadent and compelling town brought in a trillion dollars of drug money...yes, you read that right, a trillion, not a typo. The villain of the piece was a grotesque Miami druglord called the Slug, who was so fat that he executed people by choking them in the folds of his body.
Posted by Julian Perez at 11:08 AM

I'm sorry Poison fell into comic book limbo. After her first appearence, she did an issue or two of Marvel Comics Presents then vanished before popping up in Spider-Man as part of the storyline involving the Great Game.

Unfortunately she was killed off and zombified off-panel by Hydra and the Hand in the Wolverine story "Enemy of the State." She apparently died during an attack on SHIELD. One or two people who were brainwashed have shown up alive and well recently so I can only hope someone will pull Poison out of the bottom of the toybox and do something with the character other than red shirt her.