The Female of the Species is Worse Than the Male

When it comes to science fiction fans, the female of the species is far more irritating than the male, and the website Fandom Secrets proves it.

From the sexual fixation with Doctor Who and Heath Ledger's Joker, the worst element has to be the hot man-on-man action. Not because gay stuff is icky, but because of the irritating insistence on out of character pairings.

As weird as fanboys can be sometimes, at least most will admit to wanting a good old fashoined shag with Jessica Rabbit or Talia from Batman comics. Fangirls, though? They're often too hypocritical to admit sexual desire. The way they idealize their objects of affection to a crazy degree gets under my skin. I had the experience of meeting one girl that insisted that "Jason Behr from Roswell doesn't smoke!" (He does.)

If you've ever been a guy that wanted a girl that could talk with you about Dungeons and Dragons, Tron, or the collected works of L. Sprague de Camp, this sort of website will sharply disabuse you of that notion forever. "Fandom Secrets" performs the valid public service of scaring men straight into (once again) dating shallow, bosomy blondes that like John Hughes movies.

I will admit, there is one that actually did catch my eye as being quite wonderful and charming: 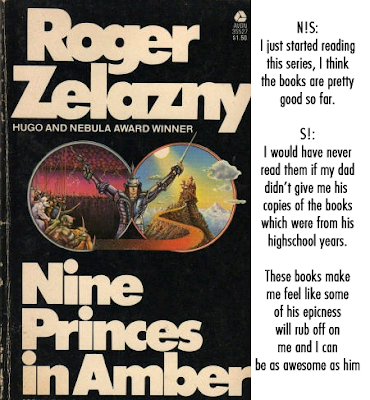 While it would be nice to have a woman I could talk to about Marvel Comics, scifi films, and my love GIJoe, I will settle for one that doesn't mind if I hang a poster for the 86 Transformer movie somewhere in the house or if I have a section dedicated to my Joe collection.