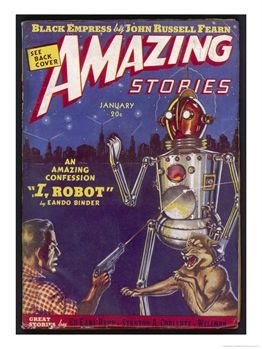 Asimov has the bad luck of two works that have titles similar to others: John W. Campbell wrote his story "Nightfall" years before Asimov, and the title for Asimov's anthology of robot stories was chosen by a publisher in 1950, unaware that a work had already been written with that title back in 1939 by the Binder brothers, Earl and Otto. The name they used together was the essence of compromise: a solution that leaves no one happy that results in an extremely fake-sounding name.

"I. ROBOT" is an illustration of two things:

1) Yes, there were differences between the "scientifiction" pulps, which were not all a giant undifferentiated mass of robots and rayguns as people unaware of science fiction seem to think;

2) In every brother writing team, there was always one with the disproportionate part of the talent, that carried their collaborations.

The three short stories that make up the I, ROBOT collections were written just before the 1939 cutoff point of the collaboration between the brothers, where Otto took over writing full time and Earl became his literary agent.

The story is extraordinary for its time as it has a robot as a main character as opposed to just a monster or wisecracking sidekick.The titular character Adam Link is a robot built by a scientist and like van Vogt's Slan, the theme of the stories is prejudice. Adam Link terrifies his creator's housekeeper the instant she got sight of him, and after his creator is killed by accident by a falling object, she assumes Adam Link is responsible. Adam flees for his life, a murder rap on his head and armed gunmen on his trail. When they see the "monster," they shoot to kill. They murder Dr. Link's dog, which provokes Adam and makes him use his great strength. Adam starts to discover the hysterical prejudice against him when he finds the scientist's copy of Frankenstein, which was hidden away from him.

Of course, it doesn't end there: Adam gets his day in court, naturally, where in shades of Data in "Measure of a Man," argues for his sentience and status as a living being. (This short story, "The Trial of Adam Link" was incidentally, modified to be an episode of the Outer Limits.)

Like the Slans or perhaps the X-Men, Adam Link is strange but special, an angry, misunderstood outsider. What I think is especially interesting about the Adam Link stories was that Adam Link was in fact, very frightening. Every time the story m 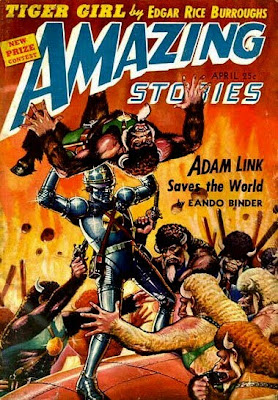 akes you get on Adam Link's side and tut-tut the people in Binder's stories for being hysterically afraid of a robot, Adam Link does something shockingly savage and with incredible strength that shows just how frightening a machine with his physical power would be. There is nothing similar in the Binder brothers' stories to the Three Laws of Robotics, and Adam Link is capable of murder, something he debated many times to preserve his liberty. In short, even though you were on Adam's side you were never really comfortable around him.

It's easy to blame Otto Binder becoming the sole writer for the subsequent post-1940 decline of the Adam Link stories...and I will! Just take a look at these b-movie titles:

...and it just gets worse from there. I never thought I'd get nostalgic for Breastica, Amazon from the Naked Future.

The younger Binder brother, Otto, when working alone, gave Adam Link a wife and family. Adam's wife's name was - and prepare to be totally blindsided here - Eve. The absolute worst was Adam Link Goes to War, which features Adam against the Sirius Confederation. It's a commonality of writers hacking out material that they turn what ought to be a great premise into a dull one. Just like ERB turned the unbelievably cool-sounding Tarzan and the Leopard Men into a stale story involving the antics of a funny monkey mistaken for a god, Adam Link Goes to War was a concept that was unfuckupable: just have Adam Link flip tanks over, baby! And what's more, there's some juicy potential inner conflict there with Adam as well: Adam is a pacifist, but are there circumstances where it is moral to wage war and take life?

The defining angst and alienation of Adam Link was replaced by goofy gimmickry, robot kids, and a robot dog (which makes as much sense as it sounds like it does), and it's no coincidence that this creaky, sitcom means of creating "zany" plots ("Who ever heard of a robot playing soccer?" Oh, Otto, you nut, you) began as soon as Earl left to become Otto's literary agent, which is like George Harrison and John Lennon leaving the Beatles to design the band's posters. Incidentally, Otto Binder would, two decades later, export this hideous model of a superhero family over to Superman and ruin him for an entire generation, before Julie Schwartz came on and his stable of competent writers treated the humiliating Weisenger Era as an aberrant hallucination.

The first work I ever read by Binder were several fill-in stories during the exemplary Jim Shooter and Curt Swan run on Adventure Comics. More than anything else, the younger Binder brother struck me as...well, sad. The contrast could not have been greater between Jim Shooter's rebellious, characterization-centered stories with huge stakes and the often trivial, irrelevant stories Binder told. The shocking part is that Binder was 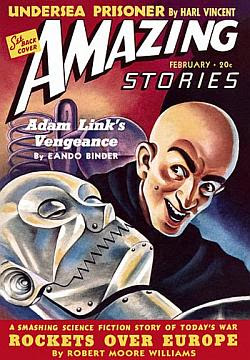 just doing what he always was doing - there's little difference between "The Eight Legged Legionnaire" and the stuff he did in the forties, when he had a top-selling comic. It was comics that changed, not Binder.

God, must it have been tough to have been utterly overshadowed by a fourteen year old kid like Jim Shooter! For this reason any feeling I have toward Otto's lesser Adam Link stories are tempered by pity and sympathy: Otto Binder was, towards the end, a sad old man that time passed by.

As easy as it is to blame Otto Binder for the terribleness of the later Adam Link stories, it has to be remembered he had an editor to satisfy who may partially bear the blame for them.

Amazing Stories, where all the Adam Link pulps were published, was the first scientifiction pulp magazine, created by Hugo Gernsback all the way back in 1926. However, by 1938 it had been bought by the Ziff Davis publishing company, who put Raymond Palmer, a diminutive hunchback, in the editor's chair.

Whereas John W. Campbell's Astounding Science Fiction explored the human stories behind science and ushered in one of its peak periods, for the majority of SF's "golden age," Amazing Stories was downright peripheral, a holdover from a time when science fiction was about "sex and shooting," with lurid, naked covers. Few of the stories originally in Amazing Stories are reprinted today.

It's often forgotten, but Space Opera was originally a derogatory label, meant to distinguish the Campbell type science fiction from the Palmer type.

It was in this magazine that the Adam Link stories were originally published. So maybe it's editorial tinkering that led to the shark-jump.
Posted by Julian Perez at 8:58 AM