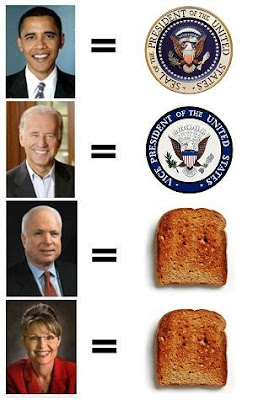 I could hug a random stranger right now, that's the general feeling. I'll be back to being a bastard that hates being touched in the morning when the euphoria wears off.
It's so weird to know I'm living in a blue state. "Landslide" would be putting it mildly.
The Obama campaign was a victory of ideals: the power of hope over the power of fear. Obama spent oodles of cash on advertizements where he didn't mention his opponent once. McCain spent his campaign either duplicating what Barack was doing (even his Iraq policy!) or arousing our fears with "boogedy-boogedy SOCIALISM!!!" cries.
Hope triumphed over the politics of fear.
The success of Barack Obama was made possible (and I can't believe I'm typing this) due to minorities: latinos, African-Americans. And especially by idealistic young people, who were able to tip the vote in nearly all swing states.
It's revenge of the nerds, like those movies where a bunch of loveable slobs and geeks beat the snooty blonde jocks that run the summer camp: the disparaged underdogs of America (young people, minorities) beat out aged geezers, traditionalists, jocks and snotty cheerleaders. Come to think of it, that's why Sarah Palin seemed to have such popularity: shallow, mean and unintelligent, she was the ultimate High School "Queen Bee."
The contrast couldn't have been more different than the crowd shots of both rallies. McCain's rallies all had reaction shots of depressed looking blonde Scandinavians and other assorted corn-fed douches. The reaction shots of Obama's rallies looked like real Americans.
All through the Bush years, I hoped for something like this to happen: a crushing landslide made possible by the young and by people at the fringe of America. They elected someone that otherwise wouldn't be electable: a black guy with an Arab-sounding name, who was the son of a single mother, who by his own merits rose to head of the Harvard Law Review and graduated at the top of his class in an Ivy League School. He was from Hawaii, not "the heartland."
God, how I hate "the Heartland." Not the actual place, but the dishonest, manipulative concept that America is about white working class Christians from rural areas. It's always irked me that because my parents are both immigrants I'm considered "some Spanish guy" despite my loyalty and love for the United States, the country where I was born and raised...yet Rene Zellweiger, who is also the daughter of immigrants and raised in the United States, is considered the "All-American Girl."
If America was all, or even mostly "hockey Moms" and "Joe Sixpacks" like Sarah Palin famously said, she'd be vice-president elect now. America is about Pakistani-immigrant cabdrivers working to send their daughter to college. It's about homosexual half-Mexican, half-Italian electrical engineers in Brooklyn. America is Christian, but also Buddhist, Muslim, Hindu and Jewish.
That said, what is shocking is how broad the appeal of Barack Obama is: rural people, working class, whites, blacks, Latinos, urban white collar people, the elderly...heck, if McCain hadn't voted for himself, the win would probably would have been unanimous.
In other words, this election transcended just a mere victory for a single man. It was the victory of a broad, inclusive idea of America. It was a victory for youth and idealism. It was a moment where we shed our cynicism and said that government can be a part of the solution, and not the problem.
Posted by Julian Perez at 12:50 AM

An African-American canidate for President not only won, but took the state that was the CAPITALOF THE CONFEDERACY!!! Jefferson Davis must be going ballistic in his grave.

And to all the racist MFs I say today DEAL WITH IT @$$HOLE!!! THE PEOPLE HAVE SPOKEN AND YOUR WAY OF THINKING IS DEAD! GET WITH THE PROGRAM.

On a happier note, I am sure Martin Luther King must be looking down from Heaven and smiling right now. This is the ultimate symbol of his dream accomplished. And I'm sure Barack's grandma is right there with him. To her I say Rest easy maam, your grandson has done you proud/