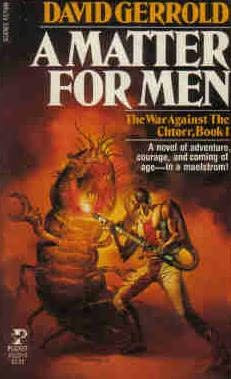 I find it hard to believe that one man could create both the loveable tribbles AND the Chthorr, who are nothing short of the stuff of nightmares.

I suppose at this point I'll have to give a shout-out to my bud Paul Chapman, currently in Tarpon Springs, Florida, who got me into David Gerrold out of Paul's interest in the WAR AGAINST THE CHTHORR novels. Sure, I read THE MAN WHO FOLDED HIMSELF before, and I knew who the guy was, but I wasn't a fan of his until the Chthorr books.

THE MAN WHO FOLDED HIMSELF is in the category of unusual time travel stories along with Julian May's THE GOLDEN TORC. I've always enjoyed unusual takes on time travel, and this one posits a fascinating idea: eventually a guy travels through time enough to the point where he "folds himself," and multiple variations of himself exist through time. It's worth noting that THE MAN WHO FOLDED HIMSELF was the direct inspiration for Roger Stern's "resurrection" of Kang the Conqueror (and Immortus). Stern refused to use any of the usual cheeseball techniques for bringing master villains to life, namely robots and clones, and instead borrowed a page from Gerrold: as a result of Kang's time travel escapades, there are dozens of different "variant" Kangs in existence, ruling different branches of the timestream. Thus, Kang really did die in the Old West (or at least that particular variant Kang did).

The CHTORR books have a particularly brainbending and terrifying idea behind them. It is a book series about alien invasion, particularly by formidable worm monsters called Chthorr, but the twist is that the invasion is ecological in nature, an entire biosphere attempting to replace earth life. Chthorr is a world where life is more hostile and lethally progressed evolutionarily speaking, and gradually parts of earth become more like the Chthorr homeworld, including its nasty flora and fauna that outperform our comparatively milder earth life with their toxic, polluting and carnivorous adaptations.

With the Chtorr worms, the question of what qualifies as sentience rears its head, a common science fiction theme also explored in H. Beam Piper's LITTLE FUZZY. One of the worst legacies of science fiction's early years is the tendency to anthropomorphize aliens, particularly in how they think. And, well, not to give any spoilers here, but the Chtorr worms don't think like humans, more like gods. They easily take their role as one of the most fascinating alien races in science fiction, along with Arthur C. Clarke's Overlords, Larry Niven's Puppeteers and Kzinti, and Alan Dean Foster's Thranx.

David Gerrold is best known for "The Trouble With Tribbles," but the one Star Trek script of his that I would most like to see, is one that was ultimately never made: "Blood and Fire," which was supposed to be in the Next Generation's first season. It dealt with the one topic that was taboo even for Trek: homosexuality, and featured an AIDS analogue, bloodworms, a disease so vile Starfleet orders are to kill patients infected with them. Gerrold himself is one of the few openly homosexual science fiction writers. "Blood and Fire" dealt with the way the treatment of fearful diseases creates a kind of anxious, ruthless inhumanity that lets us ignore suffering, which has always been a favorite topic of mine.

And the guy's still writing, too: I for one would love to see the next book in the Chtorr series. At least when it comes out, which at this rate sounds like sometime next century.

ah scifi book covers with heroes vs giant insects. Nothing beats a classic. It goes right up there with the damsel in the barely there slave outfit. In fact, sometimes both are in the same cover.