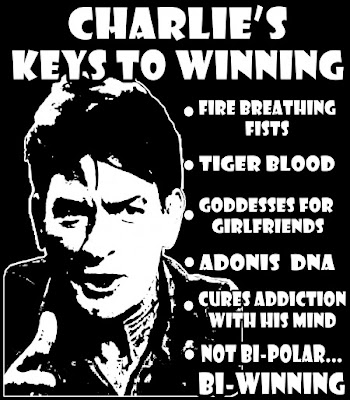 Mr. Charlie Sheen, I want you to know you have one supporter in the person of a Mr. Julian Perez.
A lot of people have gone about you saying a whole lot of weird and eccentric things about tiger blood, but that's because this nutty Oliver Cromwell puritan country doesn't know panache when they hear it...I mean, "tiger blood?" That's a cool turn of phrase.
As nearly as I can determine, your so-called "crazy" public statements can be reduced to the following bullet points:
Well, shoot, Chuck! I'd agree with all of those bullet points, and I can personally vouch for #3 being absolutely and inarguably true.
Your problem is twofold: telling it like it is in a notoriously truth-averse culture, and being utterly unrepentant about it.
If I had any piece of advice to give you, it's this: remain utterly unrepentant. Sure, it's easy to create a second career after a tremendous meltdown by suckering the rubes and pretending to give up drugs and wild women and find Jesus. Protestants have a built-in narrative about the drug addict criminal who goes too far and then needs to be "saved." As Mark Twain once said, "churchgoers love a rapscallion." This is so built into their mental hardware as true, such a soft spot, that they'll accept absolutely ludicrous claims that conform to that, especially James Frey's book where as a rich upper class white kid, he seriously claimed to be a drug kingpin and stone cold criminal. 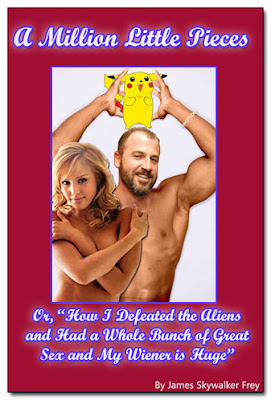 When I read James Frey, I was amazed not that he was ultimately exposed as a monumental liar, but that anyone was ever gullible enough to believe he was anything else. His lies are not only ridiculous, but pure schmaltzy pap and melodrama. There's one part in Frey's book where he becomes bunkmates with a huge but ulimately goodhearted and illiterate black prisoner. Frey then teaches him how to read, obviously. But then the pair read War and Peace together, and weep at the powerful moments. Now this I have to call shenanigans on, since I can read anything and I've tried on a number of occasions to start War and Peace but I never get more than a few pages in.
This can be you, Charlie: pimping the great Protestant addiction novel. A fate worse than death, if you ask me. 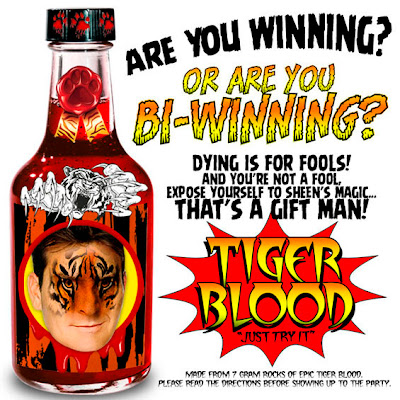 Despite that, an even more glorious fate can await you: that of the living counter-argument to the claim drugs and hard living will kill you eventually. Growing old is inevitable, but growing boring and cowardly is optional. Take Hunter S. Thompson, smart and tough - the one honest man of his generation. The entire craven, cowardly generation of the 1970s, on rewriting their history, tried to shift their experiments with drugs into "addiction." Every so often there were rumors that Thompson OD'd on this or that, but it never happened. Thompson remained unpenitent at great cost to himself, but the ultimate payoff was he didn't end up an aging sell-out.
I don't get why everyone laughs about you claiming you cured your addiction with sheer force of will and the power of your mind. That's the only thing that can truly fix anything about human behavior, including addiction.
In short, Charlie: keep on winning.
Posted by Julian Perez at 9:45 PM