News of the Weird

I really enjoyed this story about the execution of a Texas racist killer who targeted Middle-Easterners in revenge for September 11th, mostly because everyone involved came out looking good.

The Texas racist killer was evil, but he died brave, like a man.

At his execution, these were his last words:

"Even though I lay on this gurney, seconds away from my death, I am at total peace," he said. He later called himself "still a proud American, Texas loud, Texas proud."

"God bless America. God bless everyone," he added, then turned to the warden and said: "Let's do this damn thing."

Don't misunderstand me: I hate murder and racism, yes...but I also despise cowardice. Actual bravery is so shockingly rare.

Besides, he shot Middle-Eastern looking people as revenge for 9/11. There was a lot of anger and revenge momentum after that. In fact, the attack on Iraq was basically just misplaced anger and vengeance. Lots of people, even a lot of liberals, wanted to attack Iraq despite the fact it didn't have anything to do with 9/11.

Hear that, America? You're just like this guy: misplaced bloodthirstiness over 9/11 made you support violence on a bystander, and the only difference is he actually got a gun while the rest of you settled for being craven, jeering little war-cheerleaders. Are you all really such angels of mercy you can tsk-tsk this man with a straight face, especially someone who did what the lot of you jackals secretly wish you could?

Better yet, it sounds like Nark Stroman learned his lesson. Imagine that, actual redemption, something you never see because most people are proud and willfully ignorant, cruel and incapable of remorse. A case might be he was trying to do it to save himself from death row, and that's certainly possible. Prison has a way of breaking you. The thing is, Mark Stroman's been to prison before, for armed robbery no less (at age 12 - damn!). He wasn't broken there, and his death wasn't the death of a guy who was begging for mercy because he realizes he's going to die. He most sincerely came around to actual remorse. 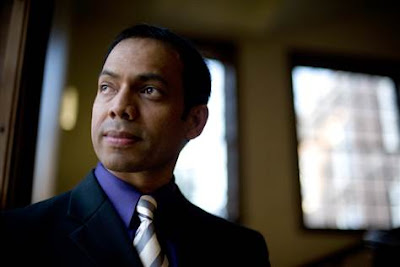 The story gets better, though, in terms of displays of real human virtue and sincerity.

The killer's convenience store clerk victim, Rais Bhuiyan, so sincerely believed in real forgiveness and mercy he fought at the last minute to save his own attacker from the death penalty. He believed his attacker had reformed and didn't deserve to be executed and his Muslim faith urged him to forgive his own shooter.

Now, if anyone in the world would be understandably excused from showing mercy, it would be an innocent convenience store clerk who had an eye taken out by a racist on a shooter rampage who shot him in the face, especially if that shooter is responsible for other murders. If Rais wanted to see a little Texas-style justice done, who could possibly blame him or hold it against him?

Again, other virtues on display that's seldom seen: mercy, and actually practicing what you preach. It's obvious enough why not being a hypocrite is virtuous, but mercy is not seen as a virtue anymore because people forget it is actually difficult to have mercy, and very easy, in fact it's the most natural thing in the world, to want revenge.
Posted by Julian Perez at 12:04 AM

So, to recap, if you're going to practice hatred and bigotry, at least be man enough to follow through and actually kill people (by which logic the 9/11 hijackers were supremely courageous). And if there are acts of mercy and forgiveness out there worthy of admiration, they're the exception and not the rule, especially in people of faith (any faith), who are by and large rotten.

Oh, and believing all of the above and finding "confirmation" of it in this news story makes you feel good.

If this is your warm and fuzzy, I like you better cranky.

On a positive note, the story about the Texas killer reminded me of the last scene in "Breaker Morant," where Ed Woodward, a loyal British officer about to be executed as a convenient scapegoat for a military debacle, yells out to the firing squad, "Shoot straight, ya bastards! Don't make a muck of it!"

Apropos of nothing, I note the "word verification" feature is telling me to enter "cyboar" to post my comment. Awesome word; sounds like a bionic pig!

I recently read a biography of von Ricthofen, the Red Baron, where despite the writer's thrilling anecdotes of the ace's skill, bravery and chops, the biographer felt the need to get heavy-handed and condemn the Red Baron and Germany in the forward and afterword. Anyone that didn't admire the Red Baron, or like him, wouldn't have written a book about all his deeds, so why not just own-up and admit the man-crush?

Yeah, I do admire the Texas convenience store shooter for being unflinchingly brave in a horrifying death – especially giving last words with gusto like that. Be honest with yourself, last words like "let's do this damn thing" are somewhere up there with "you'll never take me alive."

I would actually truly love to meet one of these movie-type sophisticated, suave rich criminal jewel thieves in real life. Most thieves are brutish, cruel, stupid and trashy, and are usually caught not by Columbo or some other genius, but because they made obvious idiot mistakes.

That's my point: virtues are incredibly rare in real life and incredibly rare on, of all things, the crime page. Most criminals don't sincerely try to redeem themselves. Most people that are harmed want revenge, especially if it involves getting shot in the face.

Let's say someone most people really hate, like fish in a barrel example…Michael Bay…is horribly axed by a guy that hates his movies. Obviously you and me wouldn't kill him, ever, because we're not like that. But wouldn't you smile a little? And worse, what if the news kept blathering over and over about how great this guy was and what a hideous crime it was? And what if those hypocrites in the press tried to rewrite history and say everybody liked Michael Bay and this came from nowhere?

Wouldn't you want to set the record straight and say, with honesty, "this crime happened because everybody hated and jeered Michael Bay, so all you smug weasels trying to get moral and indignant about it doesn't work?"

Well, that's far from hypothetical. Look no further than JFK, a president at least as polarizing as any other in the 20th century and on the whole less productive than most. When he went to Dallas, it was to shore up support for a re-election bid in a part of the country where a lot of folks flat out hated him. Anti-Kennedy rhetoric was so strong and nasty in many Texas households that when schools there announced the shooting, kids cheered.

But then he was dead and suddenly he's a saint who everyone alive at the time voted for (despite winning by the slimmest margin on record) and everyone loved. And if he didn't accomplish much, well it's only because he wasn't finished, and of course we wouldn't have stayed in Vietnam with him in office, and we'd all be living in Moon colonies now and there would be rainbows every morning and peace and love for everyone, yadda yadda.

This sort of hagiography is only partially the result of a leftist bent to the media; it's also fueled by a collective guilt. We can't imagine what could have driven Oswald to such an insane act today, but lying awake the night of Nov. 21 in Dallas, he probably thought he'd get a parade.

We saw it all again with Princess Diana, perpetual tabloid fodder and party-hopping absentee Mom before her death and Queen of Saints as soon as the car crashed. Walking punch line today, beloved icon tomorrow. Michael Jackson: see above.

So I've no doubt if Michael Bay were killed, they'd play him up as a guy everyone loved and say, "Why would anyone do this?" But no, I wouldn't smile if he died.

Well, maybe if he died in a spectacular explosion after the broken-off spire of the Chrysler Building crashed through him and ruptured a gas main, all documented by four cameras and edited together in a series of flash-cuts. Otherwise, no.

I gotta disagree with you on this one Julian. The guy didn't show bravery at his death. He showed a cliche. What the guy did was disgusting and full of hate and in dying he showed he was nothing but a brutal thug. I'm not a fan of teh death penalty but I dont shed tears over this guy nor will I honor his "guts". The man is no hero and deserves no praise.