Try to imagine for just one minute that you didn't watch movies at all.
All your friends would drop weird quotes and references you didn't get. Trends would come and go in popular culture, and you don't know where they come from.
Fractured fairy tales with modern references and winking jokes to parents would be the norm in the book publishing world and you wouldn't understand why (thanks to the popularity of Shrek, among others). 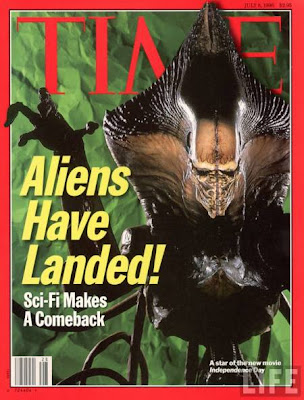 One day, everyone would suddenly be into science fiction and aliens out of nowhere and talk about how "science fiction is back" (thanks to Independence Day).
You'd wonder why, one summer, the big panic, all everybody seems to talk about are asteroids smashing into the earth (thanks to several movies with that topic back in 1990-whenever it was).
In short, you would not be aware of a lot of what's going on around you. You'd be dimly aware there's a subterranean force of great influence but you wouldn't know what it is.
Well, don't imagine any more. That's how I – and a lot of other people - feel about video games.
Until I got a friend that played video games extensively, a lot of things were going on around me that I just didn't understand. The comparison between movies and video games is totally apt because the video game industry reached a tipping point a decade ago where more Americans spent more money on video games than on movies. That statistic shocked me, but all the gamers that heard about it weren't surprised.
For example, it struck me as strange that starting a few years ago, every nerd friend I had started to be a Russophile, admiring Russian culture and the USSR. At first I thought it was because Russians were the last bunch of white people to be really scary and tough, and the USSR was their heyday and high point. And while that speculation may be true, the answer is because a lot of video games were made with Commie and Russian bad guys. 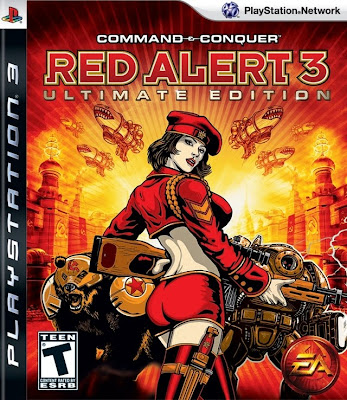 Also, when did zombie apocalypses get so popular, anyway? Suddenly every friend I had started quoting zombie survival manuals. Obviously they were inspired by the anti-consumerist Romero movies and the supercool cult films like Army of Darkness…but those have been around for decades. Why were zombies and end of the world zombie scenarios suddenly the hot property now?
I never understood zombies. They were mindless, dumb and made from boring assholes: former accountants and travel agents. Vampires are also very trendy now, but Vampires I get: Vampire stories are full of cool crumbling castles, fog, and gaslight, Victorian atmosphere. Vampires are aristocratic, sociopathic megalomaniacs with a hefty dose of scary sexuality. The good Vampire baddies have so much personality they totally dominate the stories they're in, compelling and repellant at the same time like good baddies should be. 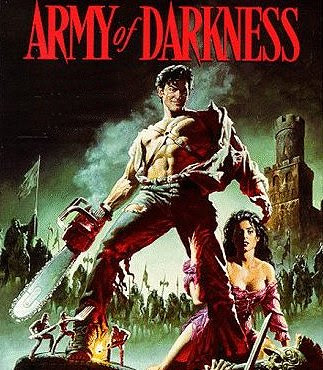 By contrast, zombies are mindless so they're more a force of nature or inanimate object. The single thing you never want in a story is one where characters are opposed by inanimate objects without personality, like a door lock or a security system, for instance. Conflict is only interesting between people and personalities that want opposing things.
Remember all the sequels to the Mummy back during the Universal days, when the Mummy was basically a mindless, speechless corpse driven like a robot by anyone wearing a certain ring? Wasn't that much less interesting and scary than the original film where Boris Karloff was an evil sorcerer creep who could barely pass for human, but who was driven by lost love?

I don't understand zombies, but I did understand why a zombie apocalypse would be appealing, at least to others. It's for the same reason people love disaster movies. Freud said nobody ever thought about disasters unless they long for them to happen at some level.
It reminds me of the Reagan administration's attitude to nuclear war, Jesus, and the environment. Everyone remembers James Watt, Secretary of the Interior, and how, when asked what his office's strategy was to preserve national parks for future generations, said that as the Rapture and end of the world would come soon there was no need to try to preserve national parks long-term. Thankfully, Reagan's enormous cowardice was greater than his hatred for living things and no war happened, but nonetheless, there is a personality type that looks forward to the end of the world because it means an absolving of adult responsibility. 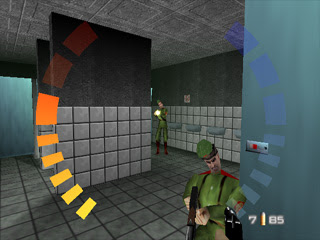 On the other hand, the very things that bore me about Zombies – the fact they have no personalities and are totally mindless – are the most appealing thing about them to video game designers. One of the greatest problems with video games is how the enemies never act intelligently, never take cover, and just run into gunfire and keep on attacking even when wounded. That may not make sense with human enemies, but with mindless hordes of neverending zombies, it's what makes them scary!
Not just that, but like with movies, if one video game does really well and is a surprise hit, everyone tries to imitate it. So before you know it, there were a billon zombie shooting games and all everybody was talking about were zombies.
As I try not to close an article without a few book reviews, it's interesting to note that the notion of the apocalypse goes before the 20th Century and back into the 19th. The idea that end of the world scenarios were a common theme in the literature of the 19th Century is very surprising to a lot of people, but it just goes to show how nihilistic Western culture actually is.
The Death of the Earth. J.H. Rosny (1910). The Rosny brothers were the single greatest geniuses of science fiction Belgium ever produced, and they dealt with mankind's beginnings (as in Quest for Fire and the Xipehuz) and mankind's end, as with the Death of the Earth, a future billions of years from now without living things where mankind is aware of their end and resigned to it - it's scary to find a world where the entire "fire" has gone out from mankind. In the moving final pages, the untold billions of generations that passed on the earth end with a single pair of eyes that shut closed. One of Rosny's preoccupations (that of evil living minerals) is on display here, just like his greatest inhuman creations, the Xipehuz. 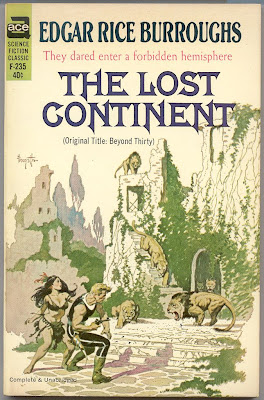 Beyond Thirty. Edgar Rice Burroughs (1915). See how far you can hear this shlocky premise before you crack a smile: World War I so totally destroyed Europe that hundreds of years later it was a totally unknown bombed out no-man's-land that reverted to stone age savagery filled with escaped zoo animals like lions. An American captain becomes the first to explore unknown Europe and saves a hot cave girl, the last queen of England. The idea World War I would have continued forever is laughable enough (as is the idea America would never get involved), but it's almost shocking to imagine the same ERB who wrote the gung-ho beat-back-the-devil Hun-basher Tarzan the Invincible would also write a story that tsk-tsks Europe for going to war and praises isolationism.
The Last Man. Mary Shelley (1826). When Napoleon was defeated, the bad guys won. The attempts to "franchise out" the French revolution and create a Republican united Europe failed, and the reactionary and aristocratic elements of Europe prospered. This was a lost generation of young geniuses like Byron crushed underfoot by snotty, dull and untalented moralists, and it doesn't surprise me the reaction to this novel about the end of the world would be horror by the Mrs. Lovejoy-types that ruled Europe. Basically, the Last Man ended Mary Shelley's career and remained forgotten until it was rediscovered a couple decades ago. Unlike Frankenstein, which was moody and atmospheric from the get-go, it wasn't immediately obvious the Last Man is about an end of the world scenario (my personal favorite failed prediction is the idea that Greece would still be fighting for independence against the Turks in the 21st Century), which made this story all the more shocking when the premise is revealed. 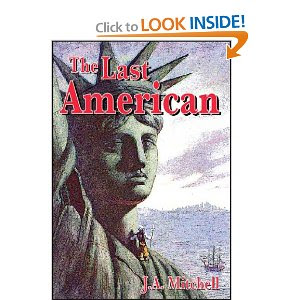 The Last American. J.A. Mitchell (1889). Some Persian explorers discover the lost city of Noo-Yok in America. Amazing to me how the cheesy conventions of the end of the world story are already here at this early stage: we even get a look at the crumbled Statue of Liberty. America and Western civilization is wrecked and mangled. What happened? The answer is something that would never occur to a 21st Century person: a weakening of the immune system that left us vulnerable to punishing winters. I guess the 19th Century was more rural than we thought. Thankfully, this book is short and its prejudices are innocent unlike the ultra-vile racist fascist Jean Respail's "Camp of the Saints," which has neither of those two virtues.
Posted by Julian Perez at 12:25 PM

I don't listen to pop music, I don't have cable and I rarely go to movies, so I almost never know what people are talking about. To top it off I regularly visit your site despite having only a rudimentary familiarity with written SF and having never played an RPG in my life. I must be a glutton for punishment.

I agree with you about zombies, though; what kind of a nihilist would you have to be to enjoy that stuff? I remember watching a "Living Dead" sequel in the 80s where some doctor comes up with a serum that brings people back from the dead, only as brain-eating zombies, which makes the experiment a failure. So he cremates the bodies and figures that's the end of that, except that the cloud of chemical-laden smoke from the crematorium spreads over the whole town and a downpour soaks the chemicals into the ground, so every corpse buried therein gets up and starts making trouble.

About halfway through the movie, I realized it was hopeless. Vampires get the stake, werewolves the silver bullet, but how exactly do you defeat *everyone who ever freaking DIED?* There are rules to good horror, and one is that no matter how many people die and how much bad stuff happens, there's always hope. Without it, there's no point in watching unless you just get off on despair, so I quit watching(incidentally, this is also why I gave up on 'Space Invaders'...no matter how high your score, in the end you're always killed, period).

I do play video games, but oddly "Mario Kart" seems not to have had a major impact on popular culture. Maybe I'll gain some street cred when I finish "Lego Indiana Jones."

Have you ever gotten the Blue turtle shell? People respect you if you pick up the blue shell.

Dave - I find there's a certain category of movies I have that I loved very much but I have no desire to see more than once. Grave of the Fireflies, the ultimate downer movie, would be one. As much as I love the Dark Knight, I have no desire to own it.

Jeez, imagine coming home from work, microwaving some leftovers, and watching John Carpenter's "At the Mouth of Madness."

As you're a Dad I think everyone can give you some slack for non-participation in pop culture. I can sympathize as I don't own cable or a TV (though I seldom volunteer this information because I don't want to be that asshole who always brags about not owning a TV).

There was a great South Park parody where the kids are all given downer medications like Ritalin, and they all become boring, watching only "Grey's Anatomy" and listening to Phil Collins. As one of the characters put it at the end: "Let's get rid of the Ritalin. After all...there's plenty of time to become boring after we become parents!"