Are you a nerd poseur? 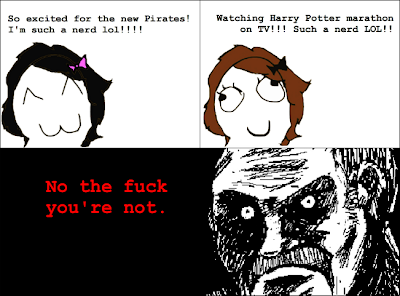 At what point is someone so non-participatory and unknowledgeable in nerd culture that no matter how they describe themselves they cannot be considered to be a true nerd? I mean, what's the threshold, the minimum passing requirement for nerd know-how? At what point does someone stop being a nerd and just becomes a poseur?
A nerd poseur! Until recently the very idea was laughably unthinkable. Who the hell ever heard of that? Until recently, nobody ever intentionally set out to be a nerd, the way people set out to be punk rockers or gangstas. Being a nerd was an accident, something that just happened because you were an outcast and outsider, and fantasy worlds, or math and science, became fixations to mentally escape a world that was unpleasant.
How things have changed! Nerd culture has taken over the world. Even attractive and wealthy people who never got an asthma attack in their lives try to be nerds. And comic book movies are Hollywood's biggest tent-pole genre now, the summer's bread and butter with two or three superhero movies a month. If you told me that would happen eight years ago, I would have burned you as a witch. 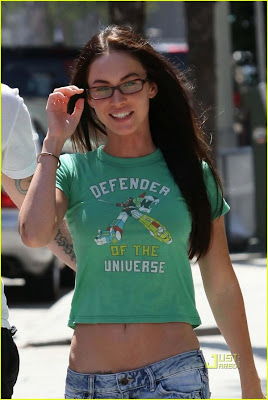 Let me describe to you something that happened to me when going to see Green Lantern with four or five supposed nerds.
Of the lot, I was the only one that read or knew anything about Green Lantern comics. Now that in and of itself doesn't mean anything since there are many different kinds of nerds into different things, and anyway, I'm more of a True Believer myself. Alright, no problem.
Then later on, there were promos for remakes of two old-school cult movies: a new Conquest of the Planet of the Apes (which many consider to be the best one of the lot) and Fright Night.
I was the only one that knew either of these were remakes. Now, Green Lantern is one thing but that's the point at which I started to wonder if something was up.
If I could go on a digression here for a minute, I don't see the point of remaking Fright Night, because as enjoyable a movie as the original Fright Night was, it was all the more interesting and original in the context it was released. The year Fright Night came out, slasher movies dominated horror films and it had been over two decades since Hammer made any of their gothic horror films. It's hard to imagine now, but there was a time in pop culture where the classic horror monsters like Vampires were so passé and old fashioned, that a vampire-themed monster horror film was incredibly refreshing and a change of pace.
That's the entire movie: a guy thinks his neighbor is a Vampire and because supernatural-type horror and Vampires are so laughably off the pop culture radar, nobody believes him – not even the pathetic has-been host of an old-timey horror show. It was like the Kingdom Come of gothic horror, with old school guys, wrinkles and all, come back to show the punks how it's done. Don't you get it? In a world of True Blood where Vampires are popular and everywhere, the entire idea behind Fright Night makes no sense.
The worst was yet to come, however. In conversation I brought up Lord of the Rings, and I realized that in a group of five nerds, I was the only one that read the entire series. It reminded me of that Twilight Zone episode where the ending was a guy realizes everyone in a bar is a werewolf but him. My God, even science fiction and Heinlein fans that hate fairies and dragons, who have never thrown dice with more than six sides in their lives…even they have read Lord of the Rings. 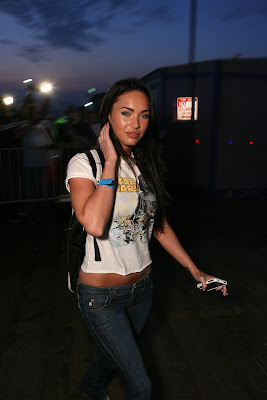 I mentioned before there is an absolute bare minimum needed to qualify as a nerd. Would anyone disagree that Lord of the Rings would be on there?
I doubt anything will come of this observation, though. When gangsta rap went mainstream, a lot of people became gangstas who didn't have the credibility to pull it off. In short, their sincerity was in question. The reason nothing like that will ever happen to nerds is nerds, as outcasts ourselves, we understand what it's like to be excluded from things and nerd cultures have an anxiety about ever excluding anybody.
Say you're a nerd and that's enough to be one – whether it's true or not.
Posted by Julian Perez at 2:00 AM

I will agree that lack of basic knowledge should disqualify someone from being called a nerd. I would apply this heavily to anything from a previous decade that has now become popular. Its ok if your first exposure to Transformers is Beast Wars, but not doing the research and at seeing what came before should be a point against you.

I was exposed to Transformers in their earlier incarnations, but I only liked "Beast Wars." Is there a special category for nerds who only like a version of a property that even other nerds don't like?
What if somebody actually *preferred* the Star Wars prequels? Would that make him or her an uber-nerd or just an idiot?

Is it even possible to be a "nerd" for a property that was developed for purely jaded commercial ends, like the prequels, instead of a heartfelt vision? Is it possible to be a "Star Wars nerd" at all if you're just getting on the bandwagon now, when the franchise is "mainstream" and "establishment" and thus you're risking absolutely nothing by getting into it (as opposed to 1977, when your friends would beat you up for not preferring "Smokey and the Bandit"? Trust me, I was there).

This weekend I thought I saw a DVD box set of the old "Callan" TV show at Costco and I was surprised to find myself relieved when it turned out to be something else. Why? Because I know what that show is and probably nobody else in the store did. And if for some reason they bought a "Callan" DVD and liked it, and got into it, then I'd have a less exclusive hold on it. What the heck is THAT about? Does it make you more of a nerd when you want to keep your interest from catching on with a bigger audience? Or just a nut?

Anyway, I agree it's interesting that anyone would want to pretend to be a nerd. I am however used to it from my days in Bond fandom, possibly the one area of "nerd-dom" that's never been tainted by negative connotations. No one has ever been ostracized for being a Bond "nerd", but out of everyone who claims to be one, probably 60-70% don't qualify.

Also, maybe you can answer this for me: what's the genesis of the word, "Nerd"? The first place I ever encountered it was "Happy Days," and it would be disturbing to think that show had that big an impact on modern society (though I happily credit it with the "jump the shark" phrase).

Happy Days popularized it but I know for a fact they didn't create it. The earliest appearance of the word was in a Dr. Seuss story from the 1940s, but supposedly Phillip K. Dick claims to have created the word back in the 1960s and 1970s.

PKD - now that's not a bad place for a word to come from. PKD is the single most uncredited influence on pop culture, right up there with Don Rickles.

It's not a question of being a nerd for something but a question of a kind of focus or dedication, due to a desire to spend your mental energy someplace else other than a hostile world filled with dickweeds where you're an outcast.

At any rate, I agree with Dave - Beast Wars was good enough to stand alone, like the new Battlestar Galactica.

David, in response to your comment about not wanting other people to know about what you're into because it somehow cheapens it - to my mind, that's almost 90% of what makes up 'hipster culture.' I liked it before anyone else did - I used to be a big fan before they sold out and got popular. But the fact that it's associated with hipsters doesn't mean that it's isolated to only them.

i loved Beast Wars I have so many figures i watched a clip online recently god those graphics are so bad but then the memories came flooding in and the rose shades came down and it never looked better.
its weird now that its ok to be a nerd and kind of funny at my job i was explaining to some coworkers what my plans are on Saturday night and instead of beating around the bush i set it on fire and just said "i play D&D"
coworkers:"...?"
me: "like LOTR with crazy dice on a table"
coworkers:"...Ohh!..?"
me: "but like a Super hero version" * moving hands for emphasis*
and instead of laughter i was met with questions almost all of them thought D&D or tabletop gaming was some sort of pop culture construction that did not exist in reality one of them actually asked "like in the movies?" it was like showing cave men fire frigging weird right.
The only person that knew what i was talking about was an older ex marine that played AD&D


1.have read any fiction preferably si-fi, and/or fantasy that was not part of required reading in school

2.comics: have them, read them,know them.the older the better

3. video games: have them, play them,know them. the older the better

4.tabletop RPGS/RTS played for more than one session and can share battle stories, stats, play style, etc.... owning figs and other gaming supply's is a plus.

5.be able to hold a conversation on science,pop culture, or any of the above for more than an hr without getting bored (extra points if u can tie all of them together)

6. truly know the sting of exclusion.

Beast Wars wasn't as unique as the original Transformers, but it had a lot going for it. I'm still impressed by the simplicity of the ball-socket joint. As a result of a little tweak like that, the average Beast Wars toy was more poseable than the average first-generation Transformer.

Alex - Don Rickles! I meant it. I think that whole sense of humor that started with him, insulting people, being sarcastic, etc. is pretty much everywhere now! He was unique then and everywhere now.

I don't know if it helps, Brian my lad, but you'll always be a nerd to me. At any rate, if you don't like the tone of this article you should read the one on Wednesday, which is about me admitting I don't know anything and miss out on a lot going on around me.

You should read Lord of the Rings at least once, though. :-)