Peter Cannon, Thunderbolt: Unleash the Powers of the Mind! 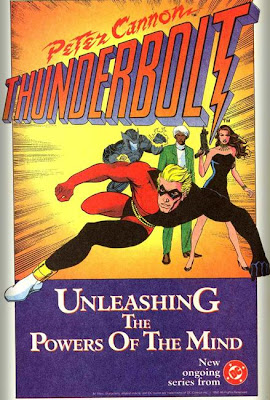 Did you ever see a character and say to yourself, "this guy is too cool for words. Why aren't they a bigger deal than they actually are?"
Two of my favorite DC characters were always in that category: the villainous Kobra and Pete Morisi's sixties hero, Peter Cannon, Thunderbolt.
First, check out the house ad up top for his first Post-Crisis series. Pretty groovy, eh?
One thing that always blew my mind about Thunderbolt was how he's the only superhero I can think of where his archenemy is a real historical person: Queen Evila, the Ancient Egyptian immortal sorceress, was outright stated to have been Hatshepsut II, who in real world history was the only female Pharaoh other than Cleopatra.
Peter Cannon, Thunderbolt has the extreme distinction of having his imitators and outright ripoffs be more famous than he is. First, there's Iron Fist, who Chris Claremont has flat-out said in every single interview given on the topic was a character "inspired" by Peter Cannon, Thunderbolt: their origins are the same, the American baby raised in Tibet after a plane crash. And everyone knows the role the Charleton heroes played in the creation of the Watchmen, with Dr. Manhattan as an expy for Captain Atom, Rorschach as the Question, and so forth....and Ozymandias was the inspiration and starting point for Ozymandias, with his tremendous speed, martial knowledge, and mystic obsessions.
The common "Marvel Zombie" attitude is that DC is staffed by old phogeys that are totally out of touch with popular culture. And every time I am inclined to think that's an unfair and undeserved stereotype DC does something that reminds me of how totally legitimate it is, by their total failure to cash in on the pop culture zeitgeist.
When Star Wars and Battlestar Galactica was a big deal, DC unveiled their sorry afterthought, Gerry Conway's Atari Force. Marvel, meanwhile, responded to the Star Wars craze by doing Star Wars comics. Then you have DC's years-too-late attempts to cash in on the Martial Arts craze, featuring a lily-white dude (I'm just saying!) named Richard Dragon.
A few recent failures to capture the imagination come to mind. For instance, Barry Allen was a police scientist years and years before the public fascination with scientific/forensic police work and had been dead for decades by the time of the CSI craze. Though in that case it's probably for the best that Barry stayed dead, if Barry was alive, he could have a lot of cachet to do something audiences like.
The second example I can think of is the current popularity of Avatar: the Last Airbender. I'm sure someone must know of the untapped potential here! My God, Peter Cannon could be DC's answer to Avatar! Avatar was a series about a hero raised by Tibetan monks that constantly reincarnates over and over. That's the same with Thunderbolt, also called Vranya (which is a real Indian word, incidentally).
Posted by Julian Perez at 3:45 AM

Think you meant to say "Thunderbolt was the inspiration...for Ozymandius."

I have to confess that while I dig the costume, I've never read any Thunderbolt stories. In fact I just assumed he was another Flash wannabe, like Lightning or Quicksilver (he wrote, bracing himself for the hurled brick). Most likely I was scared off by the dreaded phrase, "Charlton character."

I have no idea what DC was thinking with "Atari Force," though I never took it as their answer to Star Wars. Just a very lame bid to win over the nascent videogame generation and a criminal waste of Jose Luis Garcia Lopez' prodigious talents.

I always thought it was ironic and darkly funny that Barry Allen was long dead when the CSI craze hit.

Like I said, Thunderbolt could be the DC Universe's answer to Avatar; a big leaguer with a mystic component, and an element of reincarnation that lets him play a large role in the universe. He's got a ready-made Rogues Gallery (something other Charlton characters don't have), and a Spider-Man type supporting cast. He's got a power set that is so distinctive that I can't think of any other character that has it: super-speed and superfast running, sure, but he can also use that energy for temporary bursts of superstrength, and he knows Martial Arts.

Of all the DC properties, both Thunderbolt and Kobra are the single most unused and with the most potential. Kobra could, I think, be in the same category of major villain along with Darkseid or Ra's al-Ghul.

As for Atari Force, I read the Gerry Conway warning label and stayed away, but the art looked incredible.

You like the costume? I always thought that was the weakest element of the character. He looked like a playing card. It adds to the untrue perception he's just another generic speedster instead of the weird character he actually is.

Incidentally, lest you think I'm being too hard on DC, I have to say Marvel's really blowing it big time with the current vampire craze.

With Vamps at an all-time high in popularity, what would Marvel do? Bring back Tomb or Dracula, the Night Stalkers, Lilith, or Morbius the Living Vampire? Naaaaaah...

Talk about striking while the iron's hot, knuckleheads!

I know they're doing a huge story involving Vampires in X-Men. Jubilee was turned into one, as I remember right (haven't ready X-Men since Brubaker left).

Yeah, Marvel's answer to the vampire craze is to have Dracula and a backstabbing son of his face down the X-men with Jubilee and Wolverine turning into Nosferatu.

As for Kobra, at least Geoff johns got some use out of him in JSA. I know there was also a mini called JSA vs Kobra. i have the first 2 issues but I need to track down the rest.

I think DC lost the rights to Pete Cannon. I havent seen him in ages.

With a name like "Peter Cannon," he's probably moved on to a career in "adult films."

Yes, I liked the costume, but mostly because it reminded me of the original Daredevil, who intrigued me at the time (now that it's easier to find and read his old stories...and new ones...he turns out to be a lot less interesting than I imagined).

I haven't read X-Men since Paul Smith was drawing it (back when "Men Without Hats" were on the radio!), but I remember when they did encounter a vampire -- some Dracula stand-in like Alucard or something -- it didn't work at all for me. The only thing more awkward was when they crossed over with Star Trek.

Probably Marvel doesn't know how to adapt their "evil monster" approach to vampires to fit the "adorable and misunderstood" model currently in vogue. A more logical publisher for 21st century vampire comics would be the Archie group.

Thanks Dave. now I have an imagine in my ehad of some pasty faced guy in corner brooding while Betty and Veronica are swooning over him

When you said "a big fan of Daredevil," you meant the Golden Age Daredevil.

When you say "it's so easy to read his new stories," you're probably right. Isn't he one of the few superheroes to be in the incredibly anemic Public Domain?

And Eddie...that image only sounds silly at first. The more I think about it the more surprised it hasn't happened yet.

"And Eddie...that image only sounds silly at first. The more I think about it the more surprised it hasn't happened yet."

The only way I'd go for that idea is if Moose gets bitten and turns into a horrific servant of the undead and must be staked by an emotionally torn Jughead.

Going back to Pete Cannon, I just tried looking for info on Wikipedia and the most recent appearance was a flashback in Kingdom Come where he and all the other Charlton characters are killed in an atomic blast.

I can sort of understand why the Kingdom gets no love, as it was a sequel with a so-so artist to a huge and self-contained event where the main attraction was the art, but I actually loved the original idea...that the Kingdom was going to be a REGULAR series set in continuity. In other words, Kingdom Come was coming soon, and everything that we loved in DC was put on a ticking clock that would soon come true. I love that idea and I'm sorry it didn't materialize. Part of the reason that Days of Future Past was so powerful was because it hung over the heads of all the X-Men. It could happen and anything could be the spark that sets it off.

As for the Archie take on Vampires...well, check this out:

Lady and the Vamp

I've only read the original Thunderbolt stories from the 1960s, and there was no reincarnation element. That must be a DC addition. Thank God the Morisi family got the rights back (actually from what I understand DC never had the rights, but rather believed they bought Thunderbolt when they acquired the rest of the Charlton "action heroes).

By the by, the reason Thunderbolt's costume reminds you of the original Daredevil's costume is...when asked by Charlton to do an action hero, Morisi wanted to revive Daredevil, but he couldn't afford to buy the rights from Lev Gleason's company. So he just stole the costume and made a new character.