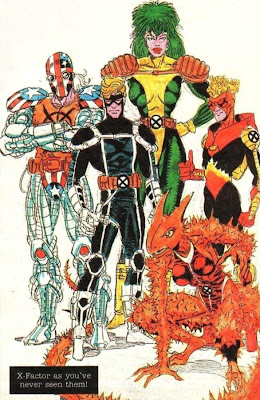 In 1991, the X-Titles were up in the air, as all the books, with the exception of Larry Hama's Wolverine, lost their creative teams - including Chris Claremont, who wrote the X-Books since 1976, an incredible 15 years. On the other hand, the X-Men were at the height of their popularity: X-Men #1 sold 8.3 million copies, numbers not seen since the Golden Age. There was talk of movies (back in the day when no comic ever got a movie) and an animated series was on the way. So the X-Titles were not only superpopular but also looking for a new direction, a winning combination for really dynamic new proposals.
We all know how all of this ultimately turned out: X-Factor, which was originally a team book with the original five X-Men, which Peter David revamped with characters the X-Office wasn't using, as a government sponsored mutant superteam that received paychecks from Uncle Sam for fighting evil. It was great to see Alex Summers leading his own superteam, as well as old standby favorites like Quicksilver, Wolfsbane, and Polaris. 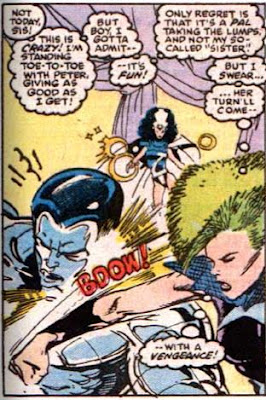 But it almost didn't happen if Bob Harras had instead gone with Fabian Nicieza and Erik Larsen's proposal for the team!
The above image was the only part of it. Notice that the only two characters to remain the same between the Nicieza proposal and the Peter David run were Havok and Polaris. People forget this, but in Uncanny #250, Lorna Dane lost her magnetic powers and gained tremendous size and superstrength in the Savage Land.
Incidentally, the Erik Larsen costume design for Havok and Pyro (yes, the proposal had Pyro reforming and becoming a good guy) are my favorite, which isn't that hard considering how Alex Summers has never had an interesting look.
Two characters in the proposal would later be used by Erik Larsen in other projects. The cyborg design was re-used by Larsen for the successful Super-Patriot series, and the cute but monstrous lizard girl became a part of Larsen's comic Freak Force. The girl dinosaur would have, as I understand, been a heretofore unseen member of the Morlocks that joined X-Factor.
All things considered, even though the proposal was rejected, things worked out fine. Erik Larsen would go on to found Image and become a multimillionaire, and Fabian Nicieza created with Mark Bagley "the super-team for the 90s," the New Warriors.
Posted by Julian Perez at 11:13 AM

interesting to note the character design for what would later be Super-patriot was original supposed to be Crimson Commando.

Even more interesting is if you've seen what Crimson Commando looks like now, its very much like Super-Patriot but in different colors.

The idea of Pyro reforming must stuck in someone's head. Pyro had a heroic death saving Senator Kelly from an assassination attempt

I seem to remember Pyro dying of the Legacy Virus but I'm probably wrong, as I haven't read that story in a very long time.

It's a crying shame what happened to the Freedom Force incarnation of the Brotherhood of Evil Mutants. I always thought Toad would have been a great Brotherhood leader: not very charismatic, maybe, but a great strategist and an underestimated genius.

"I seem to remember Pyro dying of the Legacy Virus but I'm probably wrong,"

You're not wrong. he was suffering from the Virus at the time of his death. Using his powers to save Robert Kelly killed him.

If for some reason they couldn't use Pyro, I wonder why they didn't think about using Rusty Collins instead?

As for using Rusty in lieu of Pyro:

1) I never worked at editorial so I wouldn't definitively know, but I don't anticipate any problem with using Pyro as for 15 years the X-Office didn't really do anything with him;

2) From what I read of the proposal, the reason they wanted Pyro was because they wanted at least one character to be a reformed criminal that was a little bit of a sneak and a jerk, a "James Bond" type on the side of the angels but fights dirty. Rusty, being a wholesome all-American kid frightened of powers he could barely control, wouldn't have been a good substitute...on the other hand, some other members of Pyro's Brotherhood of Evil Mutants might have worked, like Avalanche, or maybe Mesmero.

As for the Legacy virus story...wow, I'd forgotten that totally. I did remember being incredibly moved by Mastermind's death, though: he begged Jean Grey for forgiveness on his deathbed for what he did to her during Dark Phoenix.

As for Colossus's death, contrary to what a lot of other people think I remember being disturbed by it. I'm very glad they brought Colossus back. The reason is that when Colossus supposedly made his "heroic sacrifice," he was at the lowest point in his life, having lost everything that really mattered to him including his sister and family, alienated and estranged from his friends with no support. In essence, Peter's death was a suicide, pure and simple, made to look like a heroic sacrifice.

"From what I read of the proposal, the reason they wanted Pyro was because they wanted at least one character to be a reformed criminal that was a little bit of a sneak and a jerk, a "James Bond" type on the side of the angels but fights dirty. Rusty, being a wholesome all-American kid frightened of powers he could barely control, wouldn't have been a good substitute...on the other hand, some other members of Pyro's Brotherhood of Evil Mutants might have worked, like Avalanche, or maybe Mesmero."

Hmmm....... I see what youre saying about using another member of the Brotherhood if Pyro was unusable. Interestingly enough, Mesmero was a part of the Weapon X comic that came out in the early 2000s.

As for Rusty, he was a bit frightened of his powers at the start but that idea had pretty much disappeared by the time he was part of the New Mutants.

Also, I think by this time, Rusty and Skids were brainwashed members of Stryfe's Mutant Liberation Front. There could be story potential there. Have X-Factor rescue and deprogram him. He could still have some of his brainwashing present which would cause him to be a bit more aggresive that normal. Also, Crimosn Commando was part of Freedom Force when they arrested Rusty and Skids on trumped up charges. Maybe Rusty still has some issues with him.

Re-reading this article I think that if this happened today, we would have two x-factor teams: one by Peter David, and "uncanny" x-factor by Larsen/Nicieza