The bad guys have a point 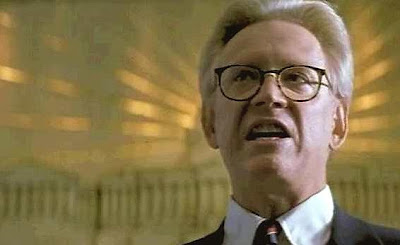 Hey, remember the evil Senator bad guy from the first X-Men movie? We're all supposed to view him as some ugly fascist type, but the thing is, he was mostly right.
"There's a girl in Illinois that can walk through walls. What's to stop her from going into a bank vault?"
I know he's supposed to be a bad guy, a cookie cutter fascist, but that's a pretty darn good point. Mutants can be dangerous and powerful and should be registered and controlled just like the government responsibly registers and controls firearms and explosives. I just don't get why this senator is supposed to be the bad guy of this movie. Jeez, they even went to the trouble to hire a guy that specializes in playing unlikeable assholes, Bruce Davidson, better known as the guy that abandoned Captain Picard when he was a Prisoner of War of the Cardassians.
Then you have the movie "I am Sam," the film that gave the world the ghoulish Dakota Fanning. It's supposed to be a feel-good airplane movie about how love triumphs, where a retarded man wants custody of his daughter. Now, no matter how much goodwill you might have toward a guy as charismatic as Sean Penn, the "bad guys" in the film are totally right: no responsible person could agree that a mentally challenged man shouldn't have full sole custody of a child.
Finally, we have the series True Blood, which a friend of mine lent to me on DVD. The movie explicitly compares vampires to the gays. That isn't in doubt; the show's metaphoric power comes from that. Because an artificial blood supplement has been invented, vampires don't have to feed on humans anymore, and they "come out of the coffin" (a pun that's typical of the show's ah, humor) and demand equal rights. The people that oppose Vampire rights on talk shows tend to be stiff religious types that mention the Good Lord a lot. Their point of view is predictably not that well developed. People that don't care for Vampires are usually (at the very least) unenlightened or downright ignorant.
The thing is, though, the bad guys are pretty much right and the comparison of Vampires to gays is pretty weak. A better comparison would be to registered sex offenders. How comfortable would you be with one in your neighborhood, especially if you have children? And for the same reason. Vampires have a biological, inarguable need for human blood. In the series, all Vampires have the ability to hypnotize others into doing their bidding.
And consider that the blood supplement was only invented two years before the show started. Unless a Vampire was only created after that two-year mark, and the overwhelming majority were not, that means that prior to two years, they had to get their blood from something. The reveal of Vampires should have been accompanied by the same scenario that occurred in former Communist and Fascist countries, where now that there's transparency, a corrupt judiciary and military could be prosecuted for past crimes.
Registered sex offenders are treated differently from other people for the following reasons:
Vampires in True Blood meet both of those criteria. If I lived near a Vampire, I'd want him to have a bright orange mailbox. So, yeah, you do your thing, Straw Man redneck godbotherer preacher that doesn't like Vampires!
Incidentally, the only thing I can remember about the show, the single image that stays in my head, is everyone saying "Sookie" with a breathy voice something like 30 times an episode. It reminds me of how the only concrete images I have of the X-Men cartoon from the 1990s was someone yelling "JEAAAAAAN!" every episode and Professor X screaming and fainting. It's sort of like how in Poltergeist III, it feels like someone yelled "Carol Ann!" 500 times, over and over, all through the film.
Posted by Julian Perez at 2:01 AM

a couple of things I need to point out. It may seem like nitpicking but I'm trying to help you prove the point, even if I was debating the other side when we spoke about it earlier.

1. Bruce Davison played Robert Kelly, a character who was a supporting character for a long time in the X-men comics for over two decades. His character was not created in a void and that should be acknowledged.

2. Bruce Davison was not the character from that Next Generation episode. That was Ronny Cox. Mr Cox was the bad guy from Robocop 1 and Total Recall. I'll have to go check out IMDB and see if Davison has doen any major douchebag roles. The closest role I can think of is as a somewhat corrupt businessman in Spies Like Us. His hair is darker, but the voice is unmistakeable

Welcome to the dark side, Julian. Monty Burns and I will look for you at the next GOP cabal. :-)

Thanks for the info on True Blood; now I know I'm not missing anything. I do wonder how the "blood substitute" works, though. Surely vampires, like any other "race," would be found at all levels of economic strata. Has the government set up a "Vampire Welfare" system to distribute the elixir to vampires too poor to buy it? Is it advertised on TV like Viagra and Cymbalta, with Eli Lilly and Glaxo Smith Kline making fortunes off the stuff? Or was it developed by the NIH and distributed on a non-profit basis? Are there clinics where you pick up your doses and if so are they staked out (heh) by anti-vampire protestors with crosses and holy water balloons?

Anyway, I guess the point of the X-films is that the mere act of registering as a mutant is tantamount to an admission of guilt; that the very state of mutanthood in itself is a reason to be feared and watched closely. Which may well be true; if you carry a gun -- a potential danger to others -- you need it registered, so why not those optic beams of yours that could level a skyscraper?

The trouble is once everyone (even the mutants themselves, by signing up) have agreed being a mutant is bad, it's just a short jump to legislating what jobs you can hold, who you can marry, and whether you can procreate at all. Even anti-gays have an aversion to governmentally enforced "eugenics," which is where this seems to be going.

That said, I think the whole ham-fisted "mutants as minorities" thing has been well and truly beaten into the ground, and long ago dashed anything like pleasure out of reading the books.

As a "smaller government" fan, I say we deal with vampires and mutants the old-fashioned way; good old vigilantism.

David,
Speaking as the one who made Julian check out True Blood, allow me to say a few words in its defense.

Julian does raise a few points. however, he is basing his thoughts on only a handful of episodes, rather than a season's worth. To answer some of your questions, True Blood is advertised on TV. It started as an alternative for when doctors can't find matching blood type but its use for the vampire world was soon discovered. As for how it works, Many do use True Blood and have sworn off feeding off living things. However, one of teh running plots of the show is that there are vampires who do not wish start taking True Blood and would rather keep sucking from humans. If I remember correctly, there is one company that makes it, but others are also getting into the game. Cost has never been said, but since it is the only source of food for the vampire it may not be that expensive. Then again, most of teh vampire we've seen on the show seem to be able to afford it or refuse to "mainstream".

As for the X-Films, Julian and I were disscussing this recently. I said that the biggest problem with a legislation regarding mutant abilities is that one would be screwed simply by being. not everyone would wnat to use their abilities and to tell them they need to register or they'll be arrested would be pushing things into Japanese internment in WW2 levels. Something that came up during the disscussion was the SHRA in Marvel Comics and its effects. I brought up the example of Cloud 9, a novice superhero who had the ability to create cloudlike structures she could use to fly. Cloud 9 was forced by the government to register and was drafted in a superhuman army and made to kill others. In her second appearance, she says all she wants to do is fly. None of her training reflects that. Instead she is transformed into a sniper. Her character grew up, but at the cost of gaining issues she'll have to deal with in therapy

Thanks for the clarification, Eduardo.

I won't profess to be a vampire expert by any stretch, but has it ever been established that the blood they drink must be human in nature? Couldn't they live off of rats and mice, or stray dogs or something? Somehow I always thought they were into human meals for some psycho-sexual reasons. That is to say, they "get off" on inducing fear, or penetrating victims or both. In which case, Julian's "sex offender" analogy is even more apt, and drinking the synthetic substitute would be akin to signing up for "chemical castration:" an option where there's genuine remorse or self-loathing, but not so much if you happen to *like* being a monster, or define yourself by it.

My problem, of course, is that I prefer my vampires in the Christopher Lee/Max Schreck vein (heh, he said "vein"). Or drawn by Gene Colan. They're cool monsters, but as brooding, pretty boy heart-throbs or suffering minorities they hold no appeal for me.

To be fair, though, I did really dig Barnabas Collins, who trod the fine line between sympathetic and fearsome and remains possibly the most compelling vampire character ever.

"I won't profess to be a vampire expert by any stretch, but has it ever been established that the blood they drink must be human in nature? Couldn't they live off of rats and mice, or stray dogs or something? Somehow I always thought they were into human meals for some psycho-sexual reasons"

I'd have to check on that. I know that in the Marvel Universe, Hannibal King did resist the urge to feed off live humans and lived off animal blood, blood from corpses, and stealing from blood banks.

There are humans in True Blood who do get off on having sex with vampires and having them feed off them so the sexual nature is present. However, I would say the nature is more akin to an addiction than Julian's sexual predator analogy. While there is no "Vampire AA", the True Blood drink can be seen as a way to deal with the addiction. Although there are times in the series that the main vampire character and others "fall off the wagon".

On another note, Bill's uttering "Sookie" in his southern accent is not as bad as Julian would tell you. In fact, many of those I know of the female half of teh species who watch True Blood find his accent and the way he says "Sookie" to be one of his most appealing features.