Some of the best superhero comic characters ever: Honorable Mentions

There are some characters that I didn't include on the list that I felt a little wrong about leaving off, so here they are listed under honorable mentions. Think of them, I guess, as 20-16 (15 always seemed like such an off number to me).
J. JONAH JAMESON 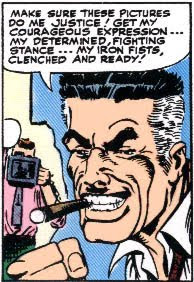 J. Jonah Jameson has the distinction of being the only supercharacter I would ever consider cosplaying as. How is it possible to dislike him, anyway?
What I find amazing about him is that he’s a loveable scene-stealing character despite being composed of nothing but bad qualities: a pompous, cigar-chomping cheapskate that hates spending money, a windbag in love with the sound of his own voice, he becomes absolutely insufferable when proven right, grinning horribly like a jackal. He has an irrational grudge against Spider-Man and jumps to sensationalist conclusions about him. He’s insufferable, treats his employees terribly, and is an egomaniac who can’t stand the idea of being wrong. Yet despite all that, he remains interesting because he’s fun to watch...and despite everything, one of Peter Parker's few real friends.
It’s amazing to me how beloved J. Jonah Jameson is when characters that are intentionally created to be liked are so hated by fans: Kitty Pryde, Danny Chase (a character who Wolfman to this day insists the fans “didn’t get”), Deathcry, Jolt and Vibe. One particularly amazing example is the Kristen Wells Superwoman: the contrast between the fanfare of her first appearance…and the fact that no one actually cared at all about her, even now, decades later…is downright darkly funny. Kristen Wells is the Jobriath of superheroes: a failure so colossal it was retroactive. I can’t get over how Wells was introduced as a cool, awesome and smart character with great powers and with triumphant “Braveheart”-esque dialogue who saves the day even over Superman and the Justice League, yet no one cares about her…and J. Jonah Jameson has spent decades embodying bullheaded stubbornness, blustery bravado, cheapness and some of the most base idiosyncrasies in human nature, and to date never demonstrated any cool superpower…yet he’s one of the most famous and loved comics characters ever. 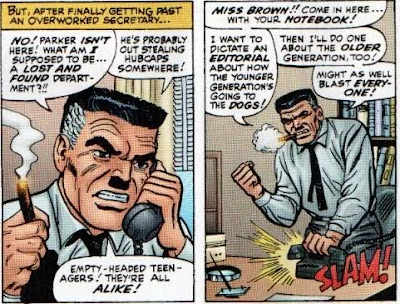 The thing that makes Spider-Man arguably the most popular superhero of all time is that 1) he has the greatest group of enemies in comics, and 2) he’s got the most interesting supporting cast. Sometimes I’m troubled by books like X-Men where nobody anywhere is ever really “normal.”
BEST STORY: As a character, we’ve followed JJ up and down, and even cheered at his marriage: I always loved Amazing Spider-Man Annual #18. My personal favorite J. Jonah Jameson moments were ones where, with no one around, he could break down, lose the bluster, and admit to himself what he really feels. One of my favorites was where Jameson admitted part of the reason that he persecuted Spider-Man was because he was jealous of him, his powers and heroism. In Untold Tales of Spider-Man #2, J. Jonah found himself saying while alone in his office, “Me – a respected pillar of the community, a wealthy, successful businessman…if Spider Man’s a hero what does that make me? Nah…he can’t be a hero. He’s got to have a secret agenda, a hidden motive...”
WORST STORY: I never really accepted how Frank Miller, in his Daredevil run, tried to turn JJ into a well-meaning, honorable man with great journalistic integrity who goes after Spider-Man out of a sincere belief he’s bad for society and actually worries children might imitate his feats. Huh?
THE TASKMASTER

Here’s the amazing thing about the Taskmaster: he’s instantly recognizable and “fully-formed” in his very first appearance. Very few villains and foes are so instantly recognizable from the outset, but Dave Michelinie knew who he was from the very beginning: a trainer for supervillain henchmen, the Taskmaster fills a never considered role in the ecosystem of a hero world. He’s different from other villains in that he’s interested in making his power pay off: he was perfectly okay with running away when he was presented with superior force and he had no real desire to confront superheroes unless they forced his hand.
The Taskmaster didn’t have grandiloquent soliloquoys. He was from the Bronx and talked like a regular guy instead of Will Ferrell as “Megamind,” quick with the quips: he was like an evil Spider-Man, an approachable regular guy instead of a ponderous Doctor Doom. One of the great realizations of Stan Lee is that heroes are more interesting if they talk without the whole “Great Neptune! I’ve got to act fast!” jazz. Tragically, that approach never really stuck for the villains, who were always written as giant cornballs.
Finally, it should be said that the Taskmaster has a great and distinctive power. Part of the reason I compiled this list is to answer with real examples the unpleasant claims of extremely cynical and bitter comics fans, who believe that real character growth and development in superhero comics is impossible, death is never permanent, nothing new is ever created, and change only lasts until the next big crossover. One claim that is demonstratably untrue is the idea that no new powers have been created, and the Taskmaster is proof, with his ability of “photographic reflexes,” able to perfectly duplicate any physical move he ever saw, from martial arts, lasso use, archery, athletics…whatever. Lots of people like him just because his power and costume are so darn cool.
BEST STORY: As mentioned, the Taskmaster’s debut in Avengers #196, where he comes on the scene with everything that would later be recognizable about him: his gruff Bronx way of speaking, his super-flunky training academies, his photographic reflexes power, his mercenarial ethos. Not since the Borg showed up has there been a successful debut story.
WORST STORY: None, thus far. But he’s getting close to being overused. Something cool stops being cool with overuse, Marvel writers!
THE 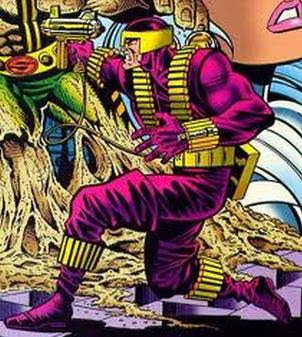 TRAPSTER
The thing that I love about the Trapster is that he’s a guy with a dubious gimmick, glue guns and a versatile series of traps – and he started his career with the most terrible name ever, Paste-Pot-Pete, something he has never really been able to entirely live down. But despite that, he’s utterly and absolutely convinced that he is hot shit. He’s got this cocky swagger utterly disproportionate to his actual ability. When a guy as scary as the Thing knocked into him, his response was “hey, who do you think YOU’RE shovin’?”
It’s not so much that he has a goofy name and a goofy gimmick: heck, name me one Gene Colan creation, from the Matador, Stilt-Man, to the Fabulous Frog-Man, who didn’t have a terrible name and an incredibly uninspired concept. No, the interest in the Trapster comes from how he tries to live that terrible original name down by overreacting, by trying to be a big man. He’s interesting for the same reason people are so fixated on Shatner’s toupee. Lots of big stars wear pieces and are open about it. Nobody cares about Sean Connery being bald because he doesn’t make a big thing out of hiding it, for example. He wears a rug for showbiz. But the reason Shatner’s piece fascinates is because of how hard he tries to deny it. 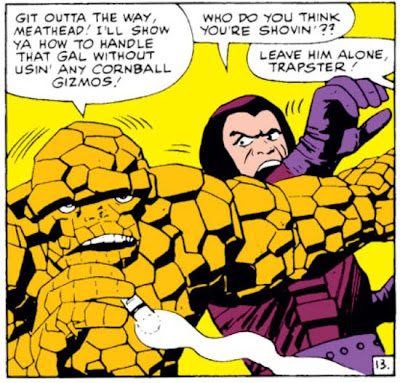 BEST STORY: Try FF #41 and #42, a story with the Trapster as a member of the Frightful Four. Group scenarios bring out the best in the Trapster because in groups, nobody really likes him. It should be said, in the interests of fairness, that despite his overreactive desire to show himself as macho and grandiose due to everyone laughing at him for his goofy name, in this story the Trapster is pretty darn ingenious when it comes to traps, from a vibra-dart that incapacitated the Wizard, paste guns that can hold a being as powerful as the Thing and Reed Richards, and so on.
WORST STORY: Any story where the function of the Trapster is to “job” and make a hero look good and the Trapster as incompetent – any villain could do this, after all. It should be said that despite his undeserved swagger, the Trapster is an ingenious trapmaker if you catch him on the right day.
THE PIED PIPER 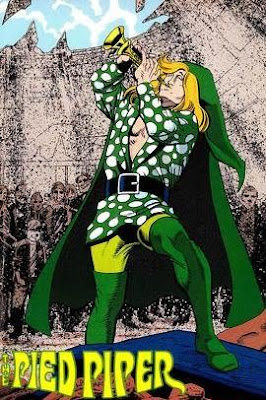 The Piper started off as yet another gimmick villain for the Flash back in the DC Silver Age, an era that had occasional flashes of genius but is best thought of as sort of like the crazy old uncle at the family reunion nobody talks to, so it should come as no surprise that the Piper’s best stories came after the Silver Age, after 1987, when he became a good guy and a close confidante and trusted friend of Wally West who invented gadgets and gave Wally scientific aid, and even helped him out in cases; his presence made the book a lot stronger, especially since he became a protector of the homeless. The Piper was the first openly gay character at either Marvel or DC, and his reformation was totally sincere, one of the few DC villains to switch sides and become a hero.
BEST STORY: Flash #32-33. The Piper was a rich kid that was born deaf, who regained his hearing thanks to his wealthy parents. The Piper always had a very complicated relationship with them, so it was incredibly moving to see him reunite with parents that considered him a disappointment and failure. It was especially great to see our expectations reversed: the absentee rich Dad never there for him growing up actually turns out to be a pretty okay guy who accepts his son for who he is when he tries to earn their trust.
WORST STORY: Mark Waid is a little like DC’s version of Jim Starlin: a guy that hates all continuity that isn’t his. Thus it comes as no surprise that he quickly wrote out nearly all of the interesting supporting cast that Wally West acquired, who made his book great to read: Chester P. Runk, Frances Kane, and the Pied Piper. The Francis Kane character assassination was especially terrible: Magenta was many things, but a psychotic girlfriend out to murder the Flash? Somehow in the face of all that, Waid allowed the Piper to slip through the cracks and be forgotten. Also, don’t get me started on the whole “he was actually mindwiped by the Top to be a good guy” nonsense. I view it as cowardly of them to undo all the incredible character development. And for what? For just another Silver Age gimmick Flash baddie? Aren’t there enough of those? 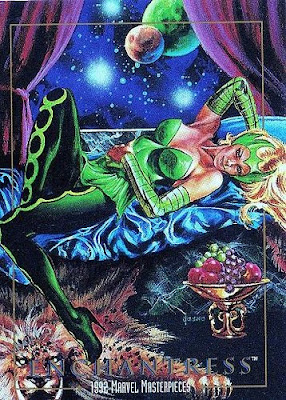 THE ENCHANTRESS
Like the Piper or Magneto, the Enchantress started out as a stock villain: a femme fatale whose master plan involved getting the hero laid, and a member of the original Masters of Evil. She later on became someone far more interesting than a scheming seductress. She was smart and selfish, and she pursued Thor because real feelings were actually shared between them. Out of enlightened self-interest and opportunism she could be persuaded to join the side of the angels for brief periods.
BEST STORIES: There are so many. One of my favorites was Thor #362. Believing the Enchantress would never love him, the Executioner decided to lose himself in a noble cause and died valiantly defending Asgard from Surtur. To everyone’s astonishment, on hearing the news, the Enchantress was visibly and truly grief-stricken.
WORST STORY: Just like Magneto, prior to a certain point when they figured out who the character was, most of the stories seemed to be about a totally different person. After seeing how interesting Walt Simonson, Shooter and others could make the character interesting, it’s hard to read her prior appearances.
Coming Soon: 5-1!
Posted by Julian Perez at 11:41 PM

If you want to read another good Taskmaster story, I'd recommend Avengers: the Initiatve #31. Its narrated by the man himself. Heck, almost all of his appearances in the entire run of the series are gold.