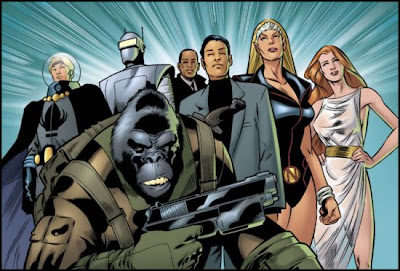 I can't recommend enough "Agents of Atlas," a miniseries from 2007 that took the incredible promise offered by the "it may or may not have happened" issue of What-If featuring a 1950s grouping of Avengers.
The book has a "put the band back together" vibe, with a plot that begins with M-11, a 1950s robot with a natural murderous streak that is truly intimidating and terrifying. My favorite member is probably everybody's favorite member, Gorilla Man, a hideous man turned into an ape that is given a family and friendship by FBI agent Jimmy Woo despite his appearance, a talking ape who has a smartalecky, swaggering sense of humor and gets all the best lines in the book. Gorilla Man plays the role that Hawkeye usually plays to the Avengers: as the one "regular guy" the reader is meant to sympathize with on a team full of gods, robots and weirdoes.
Obviously by now, the big surprise is blown: Namora is resurrected. It's common for team books to bring a character back to life in the first issue, like Jean Grey in X-FACTOR #1.
Namora is written with astounding grandiosity, as a living legend - which I find astounding. The book convinces you how cool and competent she really is.
There's one weird scene, though, where Venus uses her powers to make everyone experience a moment of sheer contentment where they would most wish to be. And Namora imagines...well, this:

WHOA!
I was totally astounded that something like that would actually be published. It's like publishing a comic where Batman and Robin kiss. Yes, it fills you with horror beyond reason, but also relief as well: you don't have to hold in anymore all of the bright blue jokes you constantly think and keep internalized.
However...and here's the interesting part. Namora isn't actually her real name, but she adopted it to honor Namor. She is Namor's cousin, however...she is a cousin by marriage. There is actually no blood relation between Namora and Namor, so technically the above scene actually is okay. Amazingly enough.
Posted by Julian Perez at 1:57 AM

amazing to think this all started because of an issue of What If. That book has been the unlikely springboard for quite a few ideas in the mainstream MU

The idea that if Bucky had lived, he would have adopted the Captain America identity, incidentally, was another thing that originally showed up in a What-If.

The thing I always liked about What-Ifs, and the reason I preferred them to say, Elseworlds, was while Elseworlds are mostly superhero versions of that Simpsons episode where Bart plays Hamlet, Marvel Elseworlds always begin with a single point of divergence from reality. Something goes left instead of right, and everything is extrapolated from there. What if Professor X got to the Crystal of Cyttorak first in Korea, instead of Cain Marko? What if Wonder Man chose to turn good a moment earlier instead of a moment later and so didn't die? Etc.

What-Ifs are often criticized for being deadly and murderous, and to that I answer...yeah. Yeah, they are because they should be.

For instance, there was one called "What if Rogue had the power of Thor?" In her first battle with the Avengers, after leeching off Carol Danvers' powers, she touched Thor and used his energy to escape. What if instead of running she just kept on draining the Power of Thor?

Okay...think about that. Can you imagine a situation where the above scenario WOULDN'T result in a body count?

And sufficed to say, the heroes failing to rescue the brides of the Serpent in Atlantis Attacks! would have been, as Peter Venkman put it, "bad."

"What-Ifs are often criticized for being deadly and murderous, and to that I answer...yeah. Yeah, they are because they should be."

true. Although it can turn into a running joke where because something did or did not happen, EVERYBODY DIES!!!!!!

Of course when we're talking body count, you can't higher than "What If Korvac had beaten the Avengers?" He wiped out the whole bloody universe. Uatu narrates that thanks to Korvac, the multiverse is now one number less than infinite. Yeouch.