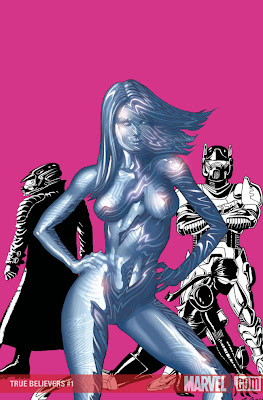 When it was announced that Cary Bates, one of my personal heroes, was going to do a miniseries for Marvel called “True Believers,” I wanted to check it out.
Bates has always been an idol of mine and I’ve always thought of him as THE Superman writer…but in general it always seemed like Superman was his most unusual work, the odd one out. One of the central themes running through his work, from his introduction of the Illuminati in Gargoyles to his work in the New Universe to his paradigm shifting and sensational work with Captain Atom…was the idea of secrets, of conspiracies, of powerful people keeping things hidden. Bates’s work is fundamentally anti-authority and anti-control. A series like “True Believers” sounded like something up his alley.
What’s more, when I read the pitch to “True Believers” I liked it right away, because I always appreciate anyone who tries to write and think of the superteam in a new way. For instance, I appreciate the effort and intent behind Busiek’s DC book “Power Company,” where the hero team was treated like a law or business firm, with members as Partners and Associate Partners, hired on commission.
There’s no way to put this delicately, but when you’re dealing with a writer from a previous generation, there’s a concern that they’d write a very ho-hum book that doesn’t speak to modern times – Chris Claremont, for instance, is a great writer but he just keeps on doing the same old thing over and over. Bates heads that critique off by writing a very “current” book that doesn’t have the heroes fighting Nazi Robot Submarines, but instead talks about things in our culture: it talks about pirate signals, computers, information warfare, and the power of “alternative media” like blogs and the moral questions they bring up. One of the annoying problems with adventure fiction in general is its fundamental conservatism and that goes triple for superhero comics, where tropes like the chieftain’s Beautiful Daughter and the Evil Asian Genius are still recycled even after the entire world abandoned them. As a result, except for the occasional genius like Steve Englehart, comics are often irrelevant and don’t speak to the world around them. I actually have no idea why this book wasn’t that successful.
This book is a totally adult book…adult in the sense that it is mature and deals with adult problems and there are no kids or wisecracking robots. If anything, I’d say the audience for this is much higher than the teenagers that usually read comics; it could be an adult drama. This totally dispels the idea that Bates can’t write a “modern” book – heck, this stuff makes even currently “hot” guys like Mark Millar look downright juvenile. It's interesting that a guy that was famous as a writer in the seventies can be more hip and relevant than anyone else working today.
The one problem that I anticipated this book having turned out to not be a problem: the idea that the heroes would be presented uncritically and sanctimoniously as heroic rebels standing up to power. The book heads that off by having characters bring up some of the big questions about alternative blogging: nobody controls it or is held accountable, and revealing the business of other people is a pretty slimy, voyeuristic business. Likewise, the fact that the heroine sees herself as constantly “in the right” and with tons of righteous indignation is actually presented as a problem.
“Kick-Ass” is a movie about technology, and how it changes us and turns us into voyeurs, and there’s something about that that has a sickening effect on the human spirit. This book, too, is about how technology changes people.
Likewise, even though it’s a new team, Bates actually shows a real understanding of how to set a book in the Marvel Universe and how to use the Marvel Universe…something that, say, Gravity and Runaways didn’t, where the fact both books were set in the MU was something of an afterthought.
One thing kept me from liking the book, though. It spent so much of its brief run arguing for what the book is about, the idea of the book – heroes as counterculture information warriors that seek the truth and oppose the powerful – that it forgets to slow down and characterize the heroes and give them personalities. By the third issue I couldn’t think of a single word to describe any of the characters. The idea of the book is not as interesting as whether we like these characters or not. For that reason, I would not recommend it. Characterization is indicational, told not shown, with personality traits as informed attributes learned with characters saying “I am all about righteous indignation” or “weird how of all of us, Ozzie would turn out to be the calm, rational zen guy.” 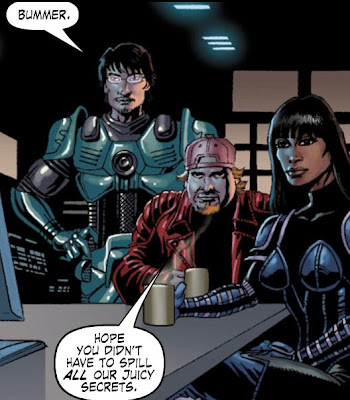 To a certain extent, this is actually little alright with the supporting cast heroes, because the book isn’t about them, so if they’re a little underdeveloped it’s to be expected. The book is actually mislabeled a team book when really it’s about one character – Payback. I expect it started out as a pitch for a solo hero book, and somewhere down the line Bates grudgingly changed it to a team book, but kept the focus on Payback. And some credit is deserved for giving Payback powers that not only tie into the Marvel Universe’s lore (she has a variant, mutated version of one of the spider-symbiotes), but give her a power-suite that is genuinely unique. I always disliked the idea of “Energy” Superman, but I thought his electromagnetic powers were a very exciting idea.
Only one of the characters is downright unlikeable to me: Ozzie Tanaka. We’re introduced to him in one of the most alienating ways possible. He “field-tested” an experimental SHIELD weapon in an massive multiplayer online game with anonymous strangers. This shocking lack of secrecy came off as downright childishly immature, but the book actually expects us to sympathize with HIM as a counter culture rebel and SHIELD as a bunch of authoritarians for kicking him out over a security breach that huge! Instead of a rebel nonconformist, which is what Bates probably intended, he came off as an unreliable, childish person.
As great as Payback’s origin was, the team's weaponized wi-fi character had an underwhelming one: he wore an experimental tinfoil hat that was hit by alien lightning. Yes, really. And the “best” part for an origin this goofy and inappropriate in a book like this is that it was all done with a totally straight face.
Another problem is the absence of a strong villain. Denny O’Neil once gave the advice that if you can only do one, forget your hero and concentrate on your villain. The thing that made the first few issues of Young Avengers so readable is that they didn’t spend all their time with the “new” heroes: the initial story arc was first and foremost about Kang the Conqueror. This book doesn’t give us a villain.
Finally, the ending of the book was a little flat, because it involved a revelation that an organization in the Marvel Universe that has a reputation as dishonest and conspiracy-prone…might actually be involved in dishonesty and a conspiracy! (Shock!) Considering all the dirty tricks pulled in Civil War, the revelation is not only anticlimactic but also something that is entirely expected. What's more, the person behind everything is someone that when they're first and briefly introduced you distrust them immediately.
Posted by Julian Perez at 12:16 AM

I was reading the profile for Armadillo over at the marvel Universe appendix sote and it mentions his appearence in the book. Ever since i saw that i was wondering what that book was about. i wonder if it'll be put out on TPB?

Armadillo showed up in the issue with Madame Hydra, and he was barely used and didn't get to do anything all that cool.

Though I did really, really like that as the team is totally new, things that aren't ordinarily obstacles are real threats to them. For instance, the team wondered how they were going to get by 5 Hydra Agents. Usually Hydra Agents are the Marvel Universe's answer to Imperial Stormtroopers; Captain America and Spider-Man could lick an auditorium of those guys, no sweat. To have them as a real threat was a nice change.

Wow. never thought I'd see the day someone would have trouble with 5 Hydra agents.

bit of an update.

Today saw the release of #2 in a planned series of 5 Marvel Handbook updates. Accoridng to spoilers posted on a message board, the True Believers get an entry.

Nothing says great writing like Trial of the Flash. Founded on a basic misunderstanding of self-defense laws, worsened by a total ignorance of the criminal legal system, and then dragged out over years when it should've taken a few issues to resolve...yeah, great writer.