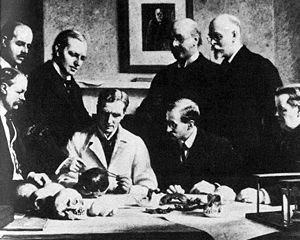 A while back, I said that the magical view of the process of reason and investigation in Sherlock Holmes stories, were intimately connected to Sir Arthur’s own personal irrationality and incredulity, which led him to be suckered by one spiritualist after another.

Perhaps it comes from growing up in the photoshop generation, but I find it hard to believe anyone was ever convinced by something as silly as the Fairy pictures.

But if a few scientists and historians are right, Sir Arthur’s crimes against rationality may go a lot deeper than even I suspected. There is a hypothesis that Sir Arthur played a role in, and perhaps even masterminded one of the greatest scientific frauds in history!

The case of Piltdown Man is a great example of the self-correcting nature of science, in that a cunning fraud was eventually exposed. It’s also comforting proof that even experts can be bamboozled by a con-game. The reason Piltdown Man was as successful as it was, was because it gave paleoanthropologists exactly what they wanted (a humanlike skull with an apelike lower face) so they were all the more likely to fall for it because they wanted it to be true. Boule, for instance, theorized that a large braincase came before the loss of apelike dentition and jaws, so Piltdown Man met expectations perfectly.

In short, “Piltdown Man” was a skull of a prehuman discovered in 1916 at the Piltdown quarry that pushed a lot of smug self-congratulatory buttons because of the idea that the missing link might have been English (take that, France!). The fossil was everything scientists expected and then some: a human brain and noble brow with an apelike jaw. As the picture of human evolutionary history became more complete with the 1924 discovery of Australiopithecus Afarensis by Raymond Dart and more fragments of “Java Man” (Homo erectus) were found, Piltdown Man was pushed to one side, ignored, and thought by most reputable scientists to be a forgery after only a few years of its discovery. Eventually, Potassium-Argon dating resolved the matter for good and found that Piltdown was the skull of a normal human with the altered, filed jaw of an Orangutan, both of which were only a few decades old. Boy, it must really have stuck in the English’s craw during those heady nationalist days: all the prehuman fossil remains were found in places like France, the Pyrenees, Austria, and Germany.

It also helped to sell the hoax that, at least in the 1920s, the picture of human evolution was woefully incomplete. As Creationists (another group of professional bullshit peddlers) would later discover, the secret to selling your weak scam is to lunge on an area that science knows very little about and make outrageous claims about it, like the idea the Cambrian fossil explosion was miraculous and happened overnight. Likewise, Piltdown Man is another example of two other all-too-familiar bane to science: a sensationalist-seeking and scientifically illiterate press that overhypes and misrepresents a discovery, which results in an end-run around the traditional system of peer review.

A few scientists (like a John Winslow article in Science magazine) have floated the hypothesis that Sir Arthur played a role in the Piltdown Man fraud. He certainly had a motive: he was extremely bitter about science debunking his favorite psychic, and he often railed about how the scientific establishment didn’t know as much as they think they did, and pretty soon someone would show them up.

It helps that Sir Arthur Conan Doyle was the next door neighbor of Charles Dawson, the discoverer of Piltdown Man. And the very year that Piltdown Man was discovered, Sir Arthur Conan Doyle wrote The Lost World, which contains a scene of scientists leaving a prank faked fossil for others to find. What’s more, Doyle was one of the few people in Britain that could have obtained a 500-600 year old Orangutan jawbone, and a few months prior to the discovery, Doyle’s personal museum had received an extensive gift of fossils from Malaysia.

Personally, I always found the idea Doyle pulled Piltdown Man to be an interesting idea, but the thought that anyone other than Charles Dawson did it was something of a stretch. It's hard to imagine even a single other suspect. In real life, as opposed to Sherlock Holmes stories, the person that did it is usually the MOST likely to have done so in almost all cases.
Posted by Julian Perez at 5:10 PM